One of the most interesting things about exercise is that it results in important health improvements even in the absence of weight loss.  For example, just a single session of exercise can result in improved insulin sensitivity, increased levels of HDL cholesterol (aka the "good" cholesterol) and reductions in plasma triglyceride levels - all tremendously important markers of disease risk.  In addition to these metabolic changes, new research by our friend and former labmate Lance Davidson suggests once-again that exercise can also prevent the accumulation of abdominal fat, independent of changes in overall body fat percentage.

The new study, published in the current issue of the Journal of Physical Activity and Health, examines the prospective association between physical activity and body fat in a group of healthy, non-obese women.  Physical activity, body fat percentage, waist circumference and food intake were assessed at baseline and again 20 months later (there was no intervention per se, just pre and post measurements). Compared to baseline, physical activity decreased in the group as a whole, while body weight, body fat percentage, and waist circumference all increased - none of which is terribly surprising.  But that's the information for the group as a whole - the interesting results come when participants were grouped according to whether or not they increased, maintained or decreased their level of physical activity during the 20 month study (see graph below). 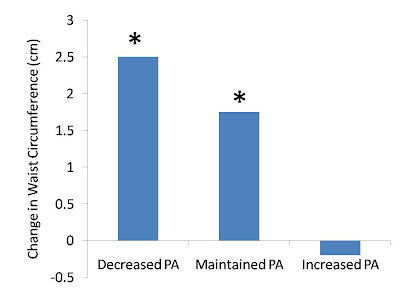 So what's the take-home message?  Increasing your physical activity level appears to prevent the accumulation of abdominal fat, regardless of what is happening to your body weight or overall level of body fat.  This is tremendously important given the strong links between abdominal fat and health risk, and because many people quit their exercise program when they fail to see a change in the number on the bathroom scale.  These findings fit with past research, which has suggested that structured exercise preferentially reduces visceral fat, even when body weight does not change at all.  I'm not 100% clear why waist circumference increased in individuals in the current study who maintained their physical activity levels, and I'd be interested to hear if anyone has any thoughts on that.

So remember, regardless of what is happening to your weight or even your body fat percentage, increasing your level of physical activity still results in measurable improvements in body fat distribution and overall health.

As a woman who had pretty much the same exercise routine for the past 10 years, I can tell you this is not a surprise to me. The changes in the distribution of my body fat align with this finding. I used to be all pear shaped, but in the last few years I've started to trend more towards apple.

The two big differences I can think of over that time is 1) I spend more time sitting for my job than I used to and 2) I'm entering perimenopause.

I will say that I'm really not happy with the changes, but it has motivated me to change up my exercise routine and I'm in the best shape I've been in since I was 17.

One thought I have is that most of the people who maintained their activity level within 20 months were not people who exercise regularly (my guess is that few of them were active exercisers). Eating habits of most of these people are not likely to be the besteither. It's a common occurrence for people with such a lifestyle to gradually gain fat with time. Maintenance of activity level could mean many things.

But ... how can you keep increasing exercise forever? Even if you increase it in small amounts, say adding 10 minutes each week, or 10 lbs of weight lifting each week, or a tenth of a mile running, sooner or later you're going to reach a point where it's not mathematically or physically possible to increase. Or am I not understanding your conclusion correctly?

That's a great question. I think Lavinia might be correct that those who maintained their physical activity level in this study may have had a pretty low level of physical activity to begin with (although I wasn't able to tell from the paper itself). Say hypothetically that someone performs just 10 minutes of physical activity per day - whether or not they maintain that amount, they're still likely to gain fat over time.

Last year I discussed a similar study which suggested that having a high level of physical activity at age 12 is associated with a lower fat mass at age 14. So while it's interesting that the "maintainers" in this study gained fat, I'm not so sure that it would apply to all situations.

I'd love to hear other thoughts on this issue!

The blood stats are really interesting and encouraging. I had weight loss surgery November 2008. However, I was not as active as I would have liked because my knees were so bad. Last July 2009 I had double knee replacement surgery. I had a week in the hospital rehab, then two weeks at home, then two months of outside rehab. One day I happened to glance at myself in the full length mirror at my rehab facility and realized my stomach was flatter than it had been for years. I got so excited that I decided it was time to get serious about fitness. My husband and I joined our local YMCA. He was reluctant at first. He has been a diabetic for years. Six months later he was fitting into smaller sizes. He is wearing tee shirts and polo shirts for the first time in years. He still has a belly, but it is a lot smaller. His love handles are gone. We both are faithful "gym rats." We also try to fit in walking between times. I should mention that we are both over 60 and feel fantastic!!!! I have been keeping a blog (see my URL) about my experiences with weight loss and knee replacement surgery if anyone is interested.

Thanks for highlighting the results of my recent publication, Travis. I also appreciate the comments from others above. I'll happily answer any questions any of you have about the findings in this prospective study. The first thing I'd point out is that we chose to follow a group of pre-menopausal women between the ages of 35-45 years. Although menopause status changes are still being analyzed in this study and were not included in the paper, a percentage of these women were experiencing some stage of menopause transition (infrequent menses, etc.) at the follow-up measurement, as might be expected in this age range. The hormonal changes associated with menopause promote visceral fat accumulation and an increased waist circumference, often independent of total fat. Thus, for this particular age range, a gradual increase in waist cirumference is the norm. The exciting finding is that increasing exercise during this stage of life helps women avoid abdominal fat accumulation. Bronzeager's point is well taken, however. It would be a difficult thing for a person to continually and consistently increase exercise volume throughout his/her life. In fact, some of our high-volume exercisers at baseline were classified as waist circumference "gainers" in the figure because for one reason or another they were unable to maintain their active lifestyles, and perhaps as a result, they gained some belly fat. The important thing to remember here is that a middle-aged woman should be aware that adding new exercise to her lifestyle will actually help her avoid the subtle shift to a higher-risk body shape that normally occurs in this age range. Congrats to Larraine and her husband for noticing the belly-reducing effects of exercise and making a lifestyle change! Jojo's observation that non-exercise time has become more sedentary is also important. If we can consciously incorporate more activity into our workdays and leisure time, we will all feel much better and enjoy optimal health regardless of our age. Thanks again for your interesting blogs, Travis and Peter!

Wall Street Journal ran an article on this a few months ago. Reported that among middle-aged runners, it was necessary to increase mileage by so much a year (I forget the amount) in order to stave off weight gain. Apparently the body is bound and determined to put on some weight during middle age.