We've all seen a news story or documentary on Discovery Channel about how global warming is wiping out Polar Bears or how poaching and habitat destruction is killing off the Gorillas. There are a lot of endangered species, and some are particularly trumpeted by the media and scientists alike. But there are 1,642,189 species on the IUCN's Red List - most you've probably never even heard of. I've found ten of them I bet you didn't know about.

What are they? Read the rest of this post!

Take the Bumblebee Bat, for example. It wins the "cutest bat ever" contest hands down. Other wise known as Kitti's Hog-nosed Bat, the Bumblebee Bat (Craseonycteris thonglongyai) is the smallest species of bat, maxing out around 1.2" long and weighing an adorable 2 grams (or 0.07 oz). It's the world's smallest mammal, at least dimensionally (there are some small rodents that weigh less but are longer) and lives in the limestone caves that line the rivers of western Thailand and southeast Burma. They're considered one of the ten most unique endangered species by E.D.G.E., and are at risk of extinction due to their forests being burned and the ever encroaching human population. 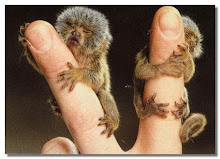 Speaking of small, red-listed mammals: Have you ever heard of the Dian's Tarsier? Its listed as Vulnerable and Conservation dependent. Found in the Philippines, this little prosimian weighs in at only 100 grams, making it one of the smallest primates to have ever existed. It's babies are barely the size of your finger - as you can see. It is nocturnal and exclusively insectivorous and carnivorous, feeding mainly on insects such as crickets, grasshoppers and - what makes me love them even more - moths. It eyes are the largest per body weight in the world, and cannot move - they have to to rotate their heads, which they can do up to 180 degrees. Unfortunately, if they lose the Lore Lindu National Park, they will likely go extinct.

Not to be accused of a small, furry bias, I have to include some non-mammalian species - like the Olm. This blind salamander is the only member of its genus, and is endemic to the subterranean waters of caves of the Dinaric karst - the only species in its class to live in Europe. It's nicknamed the 'Human Fish' because of its skin, which resembles ours in color and texture. There is also a black subspecies which lives in the cave waters of Slovenia and has become a cultural icon there. Unlike most salamanders, the Olm is entirely aquatic, which unfortunately makes it extremely vulnerable to pollution. The Olm is listed as Vulnerable due to its fragmented and limited distribution and decreasing population.

Of course, there are a lot of endangered small and cute furry things - like the Leadbeater's Possum. It's a shy, nocturnal creature closely related to the Sugar-Glider that lives in the hallows of old trees. As with other Australian species, their habitat is constantly being lost, and these guys are now restricted to small pockets of remaining old growth mountain ash forests in the central highlands of Victoria. Despite a joint Federal and State government plan to save it, the Leadbeater's Possum population has dropped from 7,500 or so in 1980 to around 2,000 - and that's not accounting for those killed in 2007 when VicForests bulldozed large firebreaks through Leadbeater's monitoring stations following the Christmas fires. There are no Leadbeater's Possums in captivity anywhere in the world (the last died in 2006), so there are no breeding programs to help get the population back on track. Only discovered in 2003, the Purple or Pignosed Frog might gets my vote for India's oddest amphibian. It's color is not its only striking feature - it looks like some freakish cross between a really small hippo, a pig, and a frog. The frog spends most of the year underground, surfacing only for about two weeks, during the monsoon, for purposes of mating - the reason why biologists failed to notice it until five years ago. Little is known about it, but the IUCN has listed it as Endangered due to its limited range and scarcity.

Quite possibly the most endangered species on this list is this little guy: the Solenodon. While it conjures images of fire swamps and ROUSes (to us uber-nerds), its actually a small shrew-like mammal from Cuba and Hispaniola that is virtually unchanged since the time of the dinosaurs. Its special among mammals in that it is one of very few that kills by injecting a snake-like venom into its diet of insects, earthworms, and other invertebrates. They also eat vertebrate carrion, and perhaps even some living vertebrate prey such as small reptiles or amphibians. The Solenodon was thought to be extinct due to the introduction of the invasive Small Asian Mongoose until a living specimen was found in 2003. It's more than likely they will be deemed extinct within our lifetime.

The Echidna is one of only two mammal species that lays eggs - the other is the better known Platypus. They aren't the "Mother of All Monsters" suggested by the mythological name - they're actually shy and non-confrontational. Though they are nicknamed 'Spiny Anteaters' and resemble hedgehogs and porcupines, they share only their diet and looks in common with them phylogenetically. They are toothless, so they crush termites with their tongues to eat them. Quite possibly the most important fact about them: male echidnas have a four-headed penis, but only two of the heads are used during mating. The other two heads "shut down" and do not become erect, and they swap which two are used each time they do it. The only three living species are endemic to New Guinea, where they are rare and hunted for food by natives.

Sure, March of the Penguins and Happy Feet made the Emperor Penguin into a cultural icon, but the Yellow-Eyed Penguin or HoiHo is the rarest. There are only an estimated 1,500 left. It's the third largest penguin in the world, but uniquely among them prefers to nest in forests, not beaches. It lives and breeds on the shorelines of New Zealand and some of the close-by southern islands. It may be the most ancient of living penguins, and is most closely related to the crested penguins. The main threats to this special bird include habitat degradation due to shoreline deforestation, introduced predators as well as environmental changes.

Up until recently, I had never heard of the Red Wolf, the smaller cousin of the well known grey wolf. An ice age survivor of the Late Pleistocene epoch, the Red Wolf once covered North America. Now it is on the verge of extinction - it's listed as critically endangered as there are only about 300 red wolves remaining in the world, with 220 of those in captivity. The population has been as low as under fifty individuals. Their situation is dire, and its very possible that they will go extinct in the next fifty years or so. However, conservationists are fighting back, and there are a few attempts to reintroduce them back into their native habitat. Its similar to its cousins but tends to have smaller packs consisting of one pair and offspring.