What a mess we've made! The 2008 International Coastal Cleanup Report

The results are in from the 2008 International Coastal Cleanup, and boy, do we make a mess of our oceans and beaches. The Ocean Conservancy had almost 400,000 volunteers worldwide picking up trash on land and off shore for the annual event. Last year, they picked up 6.8 million - that's 6,800,000 - pounds of trash in 104 countries (including 42 of US states). That's about 17 lbs of trash per volunteer!

What they found was absolutely appalling. 3,216,991 cigarette butts, 1,377,141 plastic bags, and 942,620 food wrappers were littering the world's beaches and oceans. Worldwide, 11,439,086 different debris items were picked up, totaling 400 lbs of debris for every mile of beach cleaned. They didn't just clean beaches; volunteers scrounged trash along lakes, rivers and streams, too, and 1,236 people hopped aboard boats to collect 38,224 lbs of debris while 10,600 divers pulled 219,528 lbs of trash from underwater.

The types of trash varied greatly by region. Here's a table showing the percentages of different trash types from different parts of the world (click to enlarge):

You can see that in the US, over 35% of our trash was related to smoking. That's 1,492,092 cigarette butts, lighters, cigar tips and cigarette boxes collected from our waterways alone. Only about 5% of the trash worldwide comes from ocean/waterway related activities like fishing, boating, shipping and offshore operations like drilling. Throughout the world, the vast majority of marine debris comes from land-based activities like eating fast food, beach trips, picnics, sports and recreation and festivals. How's this for a gross out factor: the cleanup crews picked up 27,862 condoms, 43,389 diapers, 10,817 syringes and 25,971 tampons.

As far as top offenders go, volunteers in the US picked up 3,661,455.4 lbs of trash - 53.8% of the total trash collected worldwide - with almost 1/3 of that coming from California's coastline alone. North Carolina and Florida came in second and third in the race for trashiest US states by weight. But by density (lbs of trash per mile), Tennessee, Montana, and Missouri took the cake, pulling in 12,720 lbs/mi, 4800 lbs/mi, and 4305 lbs/mi respectively. Texas, California and Massachusetts should feel pretty trashy, too, with over 1500 lbs/mi each. Globally, people from Korea, the Philippines and Canada also brought in lots of trash. 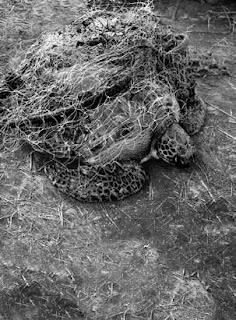 But perhaps the saddest part of the cleanup were the 443 animals that volunteers worldwide found trapped by marine debris, 268 of which were still alive and able to be released. Most of these were fish - mostly sharks, rays and sea horses - making up for 44% of the animals found. 69% of the trapped animals were entangled in fishing equipment. And these make up just a miniscule percentage of the total damage done to marine and terrestrial organisms every year by trash.

"Our ocean is sick, and our actions have made it so. We simply cannot continue to put our trash in the ocean. The evidence turns up every day in dead and injured marine life, littered beaches that discourage tourists, and choked ocean ecosystems," said Vikki Spruill, president and CEO of Ocean Conservancy in a press release. "This report analyzing nearly seven million pounds of trash is a global snapshot that shows how we are part of the marine debris problemâand a key to the solution. By changing behaviors and policies, individuals, companies, and governments can help improve the health of our ocean, the Earthâs life support system."

You can read the whole report yourself if you want to know more about the 2008 totals.

If you're as appalled by the filth that we have thrown into our oceans, sign up for this fall's coastal cleanup. While what volunteers pulled out of our oceans last year may be disgusting, the upside is that 6.8 million lbs of trash is no longer littering our seas - now that's making an impact! The more people we get involved, the cleaner we can make our aquatic environment, ensuring that generations to come get to enjoy the ocean as much as we do.

Another effort to help rid a beach of plastic waste

Last weekend I did the beach clean-up thing again, and again I went along with my son, my mum (Sandra), and about 40 other people. There's always something new to say about the problem of litter and plastic pollution: once again, I thought I'd pen some random musings on the experience, and on the…

A World Of Change

Sometimes, it's truly incredible how much of an impact people can have on their environment. The International Coastal Cleanup, for example, was able to remove 6.8 million pounds of trash from the world's ocean and river ecosystems last year alone. But most of the time, what we do is horrifying.…

Where is the debris from the Japanse Tsunami?

Almost exactly one year ago, a very large double strength tsunami struck the Pacific Coast of Japan and washed a huge amount of stuff out into the sea. The oceanic born debris of terrestrial origin looked in places like this: source Subsequently attempts were made to model the movement of the…
Advertisment