Conodonts are strange and extinct animals that left behind lots of fossils: their teeth. Practically nothing else but teeny-tiny, jagged, pointy teeth. I remember when the animals themselves were total mysteries, and no one even knew what phylum they belonged to -- it was only in the 1980s that a few eel-like soft tissue fossils were found, and they were recognized as chordates (very small chordates, on the order of millimeters to centimeters long) with big eyes and membranous fins.

And now today I find two artistic reconstructions of the conodont animal that please me. 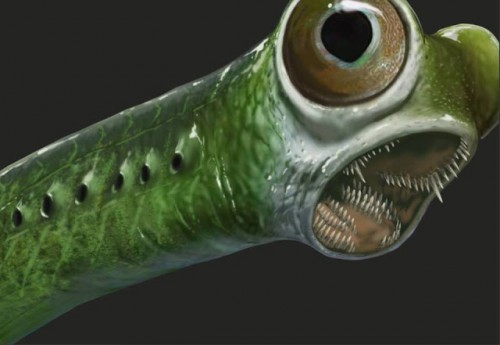 Aren't they pretty? If you've seen any of these animals (not likely, since they've been extinct since the Triassic or thereabouts) let me know. I have aquaria. I would like to raise a few thousand.

I'd also like to figure out what they're doing with those nasty teeth.

"... it was only in the 1980s that a few eel-like soft tissue fossils were found, and they were recognized as chordates..."

How could these ancient fossils have soft tissue?

@See Noknowledge #1: You would know if you were able to read and understand information, instead of just copying other willfully ignorant deceivers' cherry pickings.

@PZ -- Excellent bit of minor synchronicity! I'm just reading (for the Nth time) McPhee's "In Suspect Terrain," in which conodonts, and their use as temperature markers for oil exploration, plays a central role.

I don't recall seeing reconstructions of the conodont animal before. Those are very cool! The deep mouth structure on the second one makes it seem like the teeth were meant for crushing shells or exoskeletons.

I recently viewed and took pictures of an ammonite from Antarctica with beautifully preserved soft tissue. The pink, translucent tissue was fantastic to see. Since the fossil came from the KT boundary, I wonder if some combination of acid rain and cold temperatures following the big meteorite hit helped them last long enough to become petrified. Other ammonites in the collection appeared to me to have erosion of the newer shell, again making me suspect acid deposition was involved.