What I Did On My Summer Vacation

So, a couple of months ago, I said I was taking some time off from the blog, and wasn't sure I would make it back. What was up with that, anyway?

Well, for one thing, I had a bunch of stuff to work on, and needed the extra time. I wrote a proposal for a third book that's being shopped around now, about which I won't say anything other than that it doesn't involve Emmy. (She's taking it in stride. As long as she gets treats and belly rubs, we're cool.).

We briefly review recent experiments in atomic, molecular, and optical physics using precision measurements to search for physics beyond the Standard Model. We consider three main categories of experiments: searches for changes in fundamental constants, measurements of the anomalous magnetic moment of the electron, and searches for an electric dipole moment of the electron.

(This was prepared for, and will be appearing in the "Comments on AMO Physics" series in Physica Scripta). And second, The Limits of Entanglement:

Quantum entanglement is one of the most intriguing phenomena in physics, but many presentations of the subject leave a false impression that it provides a sort of "remote control" for changing the state of a distant particle by local manipulation of its entangled partner. We discuss a simple example, suitable for undergraduate quantum mechanics classes, showing that this is false, and demonstrating the limits of entanglement.

(That one is a slightly more formal version of this blog post, submitted to The American Journal of Physics. Thanks to Ambitwistor in the comments for the suggestion.). So, you know, I was a little busy with that writing.

Somewhat more significantly, as of August 1, I am the Chair of the Department of Physics and Astronomy. Non-academics may be tempted to offer congratulations at this point, but those in academia know that's the wrong word beginning with "c"-- "condolences" would be more appropriate. It's a big expansion of responsibilities with essentially zero benefits, other than the ability to set my own teaching schedule. It's also not something that I am happy to be doing at this time, but it wouldn't be appropriate to blog about that, so don't expect much more explanation.

Given that, why am I re-activating the blog? A bunch of reasons, from the really crass (the blog helps sell books, and more importantly for the purposes of the aforementioned proposal sells the idea of me writing and selling books) to the really personal (I could feel myself going a little nuts without the blog as an outlet for miscellaneous thoughts). Ultimately, I decided that while not blogging would free up some time to deal with my new role, being forced to stop blogging because of the extra demands on my time was making me resent the additional responsibilities in a way that wound up being even less healthy than the stress of not having enough hours in the day to do All the Things. So, in an effort to avoid hating everything, I'm going to resume blogging.

Of course, that resumption will be constrained by my new responsibilities. For one thing, I'm not going to have a great deal of free time, so I won't be posting nearly the volume of stuff I used to-- most likely, I'll only be able to do a couple of posts a week, though you might get some more short/silly posts when I have a spare moment. Another change is that I will be vastly less likely to blog about anything touching on academic politics, lest my new job title be misinterpreted as giving my words an undeserved air of authority. Nothing I write here has ever been, or ever will be, a statement of anything other than my personal opinion, but some people will always forget that, and the risk of misinterpretation is even greater with "Chair" in my email signature, so I'm going to shy away from controversial topics even more than I did before. It's just not worth the hassle.

So that's the plan; we'll see if it survives contact with the blogosphere.

Oh, yeah, I forgot to mention the other big constraint/accomplishment, though it was alluded to in my previous post: the kids are well on the way to becoming supervillains, with SteelyKid mastering telekinesis: 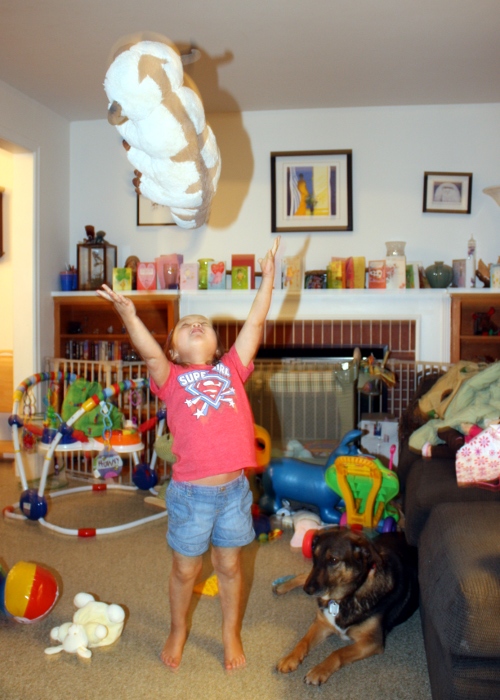 and The Pip discovering that Cheerios are precious: 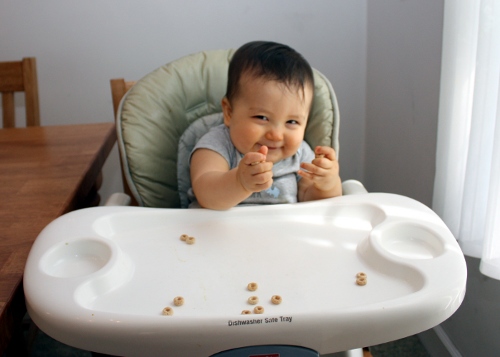 Soon, I will control ALL the Cheerios!

(OK, those are really more cute than evil, in proper context. We told SteelyKid that "Yip-yip!" was the command to make Appa fly in the Avatar cartoons, and she spent a good fifteen minutes yelling "Yip-Yip hooray!" and flinging Appa toward the ceiling. And the Pip only looked diabolical for a fleeting moment-- mostly, he's just super happy to be able to eat Cheerios: 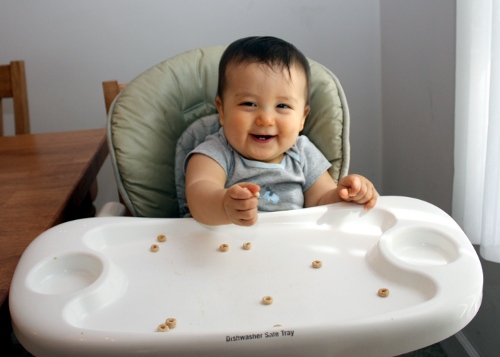 ...but I love that diabolical baby picture.)

When the pip gets to spelling messages ala the baby in the Capital One commercial then you will know you have made it.
(Although the Pip might be smart enough to take the extra cash back)

Is that telekinesis or is she airbending?
Cute.