There are a bunch of physics stories that I'd sort of like to write about, but don't have time for, and politics is oscillating between "darkly hilarious" and "indescribably depressing," so that's best left alone. So, here's some cute kid pictures instead.

SteelyKid has lately taken to telling all and sundry "This is my daddy. He's a scientist." She also sometimes adds "I'm a scientist, too!" so it seemed appropriate to go out with her and Do A Science.

As previously mentioned, she got a bunch of Backyard Safari gear from my aunt and uncle, which included a safari vest and a collapsible mesh container to put small critters in. So, on Sunday, we got her all kitted out in safari gear, and went exploring, in the woods near Lock 7 on the Erie Canal. Of course, first we stopped at the lock itself where we got to watch a couple of boats go through the lock, which was way cool. Then we went for a short walk on the hiking trails, and on the way back flipped over a dead log, where we caught a salamander. (I referred to it as a "newt" when I picked it up initially, but when we looked it up on the Internet, it appears to be an Allegheny Dusky Salamander. This has not convinced SteelyKid, though, and she corrects me every time I say "salamander": "No, Daddy, it's a newt.")

Here are some cell-phone pictures from the excursion. The first one (duplicated as the "featured image" at the top of the post) is a little unfair, as what she's saying while pointing at the water going over the dam is "Don't take a picture of me, take a picture of that." But it's a cute picture, so I'll share it. 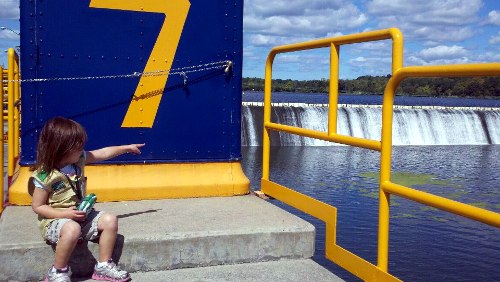 SteelyKid at Lock... Oh, I forget the number... 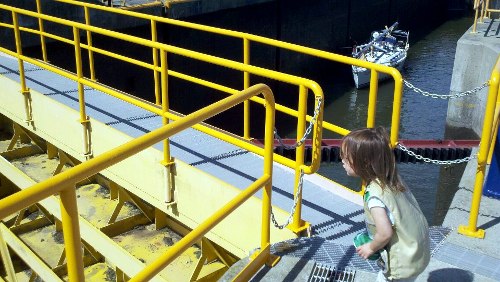 Watching a sailboat go through the lock. 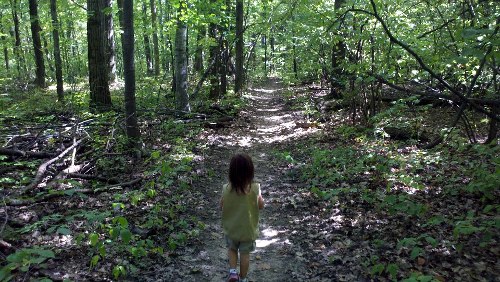 Walking on the trails near Lock 7. 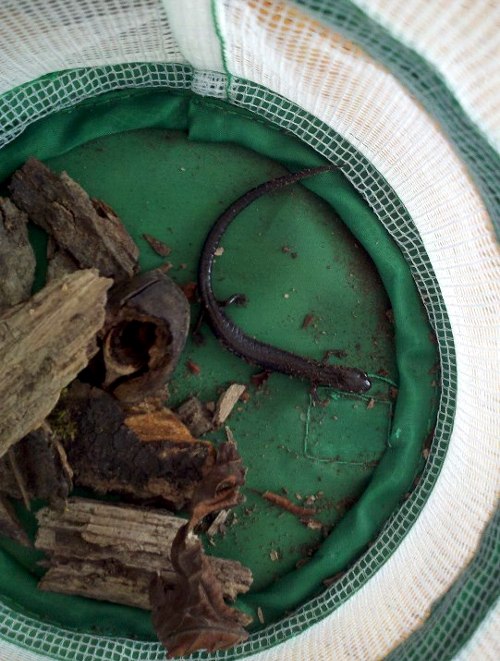 Later that afternoon, she got out one of the science kits she got for her birthday, and spent the better part of an hour mixing liquids of different colors, and mixing citric acid and baking soda to make bubbles. After that, she had Cheetos for dinner, so as I said on Twitter, she's basically a little grad student already...

(The Cheetos were not the only thing she had for dinner, and we let the salamander go by the pond in our back yard, lest you think we're awful people.)

SteelyKid is probably too young to be familiar with Monty Python, but if she does happen to know the reference, you can explain to her that it got better.

Which, alas, is more than can be said about too many political types--so I don't blame you for wanting to avoid politics these days.

Aaw! Shoulda let the salamander go where he was found! Translocation can be a BIG thing in critters' lives.

I'd say that's a redback salamander because they are by far the most common in eastern North America -- and as a kid in Ontario we used to catch them by flipping dead logs.

It should be happy living in your backyard as long as you have a shady area with a few dead logs.

Btw, they don't always have red backs, we used to catch ones that were jet black.