We're at that time of year where people publish lists of top stories of the year, but as many crazy people will be happy to remind you, this Friday marks the end of another calendrical period, in the Mayan calendar. So, I'm going to steal an idea from a college classmate on Facebook, who wrote:

When I look back on Baktun 13, I'm going to remember all the wonderful things that happened. What's your best memory from the last 144,000 days?

This seems like a good way to get some more cheerful and science-y content on the front page of the blog. So, without further ado (or very much thought), here are the Top Ten Physics Breakthroughs of Baktun 13: 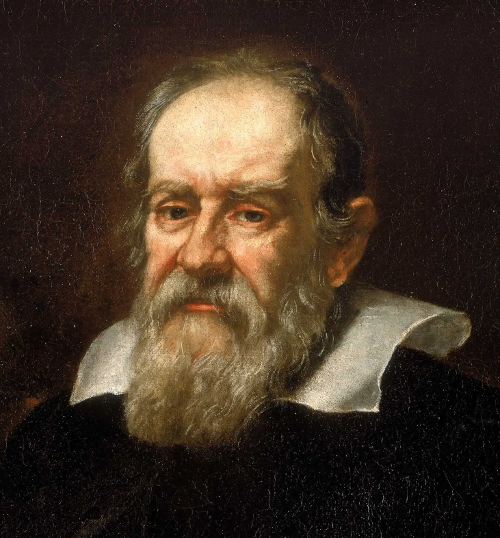 1) Constant Acceleration of Gravity Sneaking in right around the start of the 13th Baktun in 1618, we'll credit this one to Galileo Galilei (picture from Wikipedia). He probably didn't really drop weights from the Leaning Tower of Pisa, but did do some careful experiments involving rolling objects down ramps that helped establish the idea that all objects fall at the same rate. This was crucial to kicking off physics as an experimental science, and got him a spot in the Top Eleven Experiments of All Time back in the early days of ScienceBlogs. His Dialogues about the Copernican system are also a notable early example of physicists getting in trouble for meddling in politics. 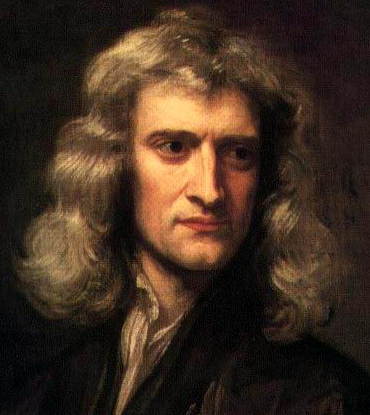 2) Newton's Laws of Motion If Galileo launched physics as an experimental science, Sir Isaac Newton (image from Wikipedia) made it a mathematical one. His three laws of motion, expressed in incomprehensible Latin in the Principia Mathematica, provide everything you need to describe the motion of ordinary objects at everyday speeds. They're a remarkable achievement, and when you add in the invention of calculus, Newton is responsible for pretty much everything else in the history of physics. 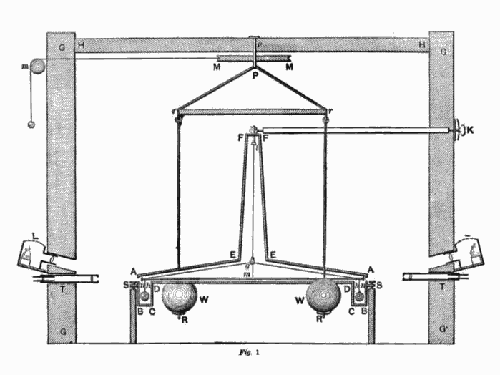 Cavendish's apparatus for measuring the force of gravity.

3) Universal Gravitation Another one attributable to Newton, but since we already have a picture of him, here's a representation of the Cavendish experiment, which pretty much kicked off precision measurement in physics, a worthy achievement in its own right (earning a spot in the Top Eleven). This confirmed the mathematical form predicted by Newton on small scales; Newton's theory of gravity had already been used to explain the motion of planets in the Solar System, and even to detect a new planet through its effect on the orbits of the others. 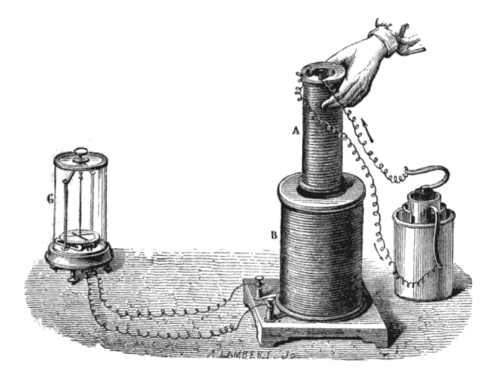 4) Electricity and Magnetism I probably could've gone with a picture of Jame Clerk Maxwell here, but I like this picture of Faraday's induction experiment (another from the Top Eleven) which experimentally demonstrated the connection between electricity and magnetism, which Maxwell later nailed down mathematically. Electromagnetism is one of the fundamental interactions in the universe, and responsible for pretty much everything you do every day. 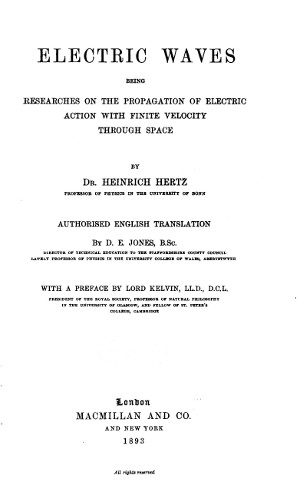 An English version of Hertz's work on electromagnetic waves.

5) Electromagnetic Waves. It might seem silly to give this a separate spot, given that it's just a straightforward application of Maxwell's Equations, but I'm a laser guy, so I tend to think that explaining the nature of light is kind of a big deal. And the transmission of information by electromagnetic waves (radio, tv, cell phones, wi-fi) has utterly transformed our civilization, in ways that Heinrich Hertz would likely find baffling, given how badly he undersold his groundbreaking experiments that proved the existence of electromagnetic waves (asked about possible applications of his discovery, he basically said "Enh, these waves are just a prediction of Maxwell's, they're not good for anything." Which goes to show that you can't trust physicists about commercial applications of science). So, they get a spot in the top ten, and if you don't like it, you can grumble in the comments.

And, of course, light plays a major role in all these other breakthroughs-- the vast majority of our knowledge of the universe comes from studying light, whether by peering through telescopes with our naked eyes, or by picking up radio waves with giant telescopes, or by catching gamma rays with orbiting satellites. If we know about it, it's because we've seen it using light. So light is central to all of physics, making it fitting that it occupies the midpoint slot on this list. 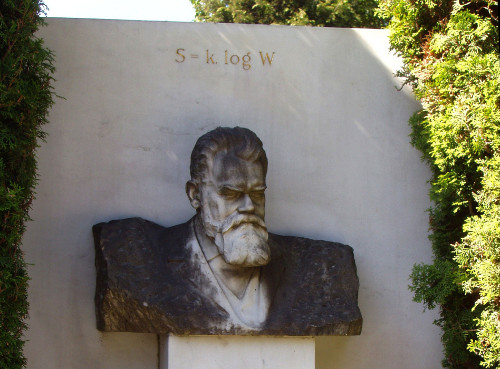 6) Thermodynamics/ Statistical Mechanics We'll illustrate this one with the grave of Ludwig Boltzmann, who made the connection between the flow of heat and entropy in macroscopic systems and the microscopic behavior of the particles making those systems up. This is one of the cornerstones of modern statistical mechanics, which gives us our best understanding of why we perceive the flow of time the way we do. 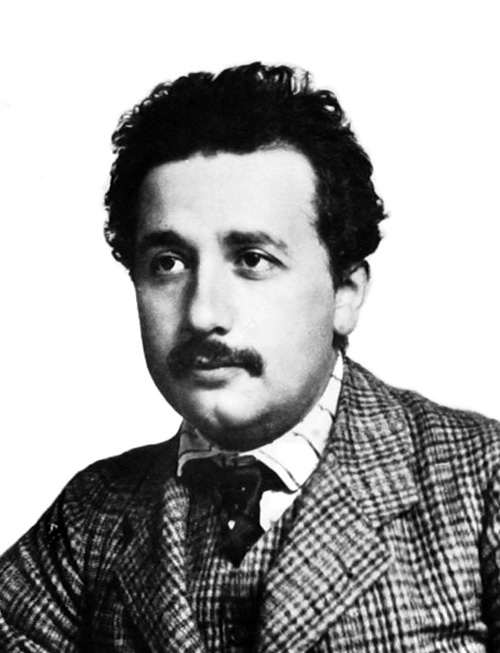 7) Relativity everybody remembers Einstein as the old guy with the crazy white hair, but he was a young man when he did his ground-breaking work, so we'll use a picture of the young Einstein as a marker for his greatest breakthrough, the theory of relativity. It's usually broken into two parts, Special and General, but really, it's all one thing, and if you'd like to know more, I can recommend a book to read (which also makes a lovely New Baktun's gift...). 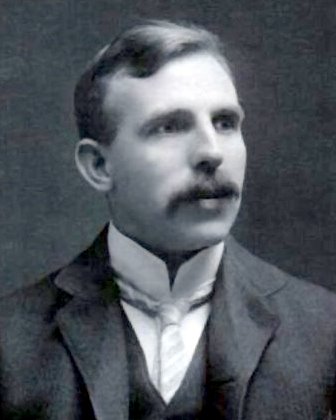 8) The Nature of the Atom Ernest Rutherford's serving as our representative here, because I like his style, and because it was an experiment in his lab that revealed the structure of the atoms that everybody learns in grade school these days: nearly all of the mass concentrated in a dense, positively charged nucleus with electrons around the outside. He could probably share this space with a theorist who worked for him, Niels Bohr, who dealt with the fact that Rutherford's atomic model didn't make any sense in classical physics by throwing classical physics out the metaphorical window, and introdcing the first quantum model of the atom (100 years ago next year-- how are you planning to celebrate?). Feynman famously suggested that the idea of atoms was the one piece of knowledge that, if passed on to some post-apocalyptic civilization, would allow you to reconstruct all of modern science. So that's plenty good enough for a spot on this list, and something to keep in mind as the baktun comes to an end. when the Mayan gods remake the world again, or whatever the hell is supposed to be happening this month, remember about atoms, so we can reconstruct modern science afterwards. 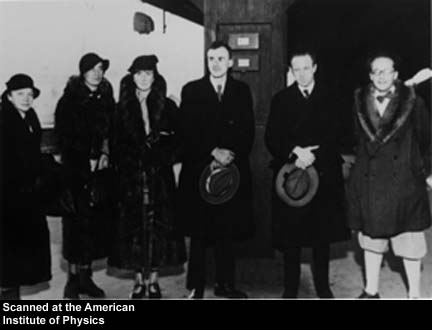 Paul Dirac, Werner Heisenberg, and Erwin Schrodinger on their way to pick up their Nobel Prizes.

9) Quantum Mechanics Following on Bohr's theory of hydrogen, a generation of young physicists completely revolutionized the field, discarding all sorts of commonsense classical ideas about how the universe works. While the new physics developed by people like Dirac, Heisenberg, and Schrödinger (pictured above at the train station on the way to receive their Nobel Prize in Physics) is bizarre and uncomfortable, it absolutely and unquestionably works, making correct predictions about how the world works, to fourteen decimal places. And if you'd like to know more, I can recommend a book...

Tomonoga, Schwinger, and Feynman, co-inventors of QED, screen-captured from the Nobel web site.

10) QED "QED" is a great way to end a mathematical proof, and also a great way to end this list, provided you intend it to mean "Quantum Electro-Dynamics," which was independently developed by Shin-Ichiro Tomonaga, Julian Schwinger, and Richard Feynman in the late 1940's/ early 1950's. This is the most complete theory we have of the interactions between light and matter, and while it's extremely odd-- predicting, among other things, that particles can appear and disappear out of nothing in empty space-- it's probably the best-tested theory in the history of science. It's also the foundation of quantum field theory, which is the basis for the Standard Model, which you might've expected to find here instead. QED came first, though, and I'm thoroughly sick of hearing about particle physics, so QED gets the nod, because it's my list.

I think you've also got to throw the cosmologists a bone on this one. The structure and history of the universe is pretty important too!

Dis they let Schrodinger meet the king of Norway dressed like that?

There is a heavy experimental physics bias in this article.... which I can only approve of.

A fine list. But I would have liked to see something about semiconductors. Technologically, they rival electromagnetic waves in their impact our world. And the difficult quest to understand them provides an edifying lesson on the interplay between theory, experiment, and technology.