`Once upon a time there were three little sisters,' the Dormouse began in a great hurry; `and their names were Elsie, Lacie, and Tillie; and they lived at the bottom of a well--'

`What did they live on?' said Alice, who always took a great interest in questions of eating and drinking.

`They lived on treacle,' said the Dormouse, after thinking a minute or two.

`They couldn't have done that, you know,' Alice gently remarked; `they'd have been ill.'

As an undergrad, I did my senior thesis trying to get a laser-cooling experiment up and running at Williams. The quote above was taped to the door of the lab by a previous student, and ever since I've always associated it with the physics of the next item in the cold-atom toolbox.

Why is that? Well, because one of my predecessors in the lab was kind of a quirky guy, and insisted that "optical treacle" would've been a much catchier name than "optical molasses," which is the actual term used for the phenomenon. I sort of agree-- "treacle" is more fun to say than "molasses," even if nobody outside the UK has any idea what it is.

They're both sweet and syrupy, anyway, but I fail to see what either has to do with cold atoms. In a literal sense, nothing. It's an analogy for the plight of an atom in the field of multiple. lasers. In the last post, we talked about light scattering forces on atoms, right, and left off with slow beams of atoms. Slow beams are kind of useful, but primarily as a starting point for further cooling, because a bunch of atoms drifting in one particular direction even at a few meters per second aren't all that great for experiments-- you either need to work very fast, or have a whopping huge vacuum system.

What you would really like to have is a collection of atoms that aren't moving at all, in any direction. Which means that rather than slowing a beam of atoms with a single laser, you need to do something to slow them in all directions.

So, what, add more lasers? That's probably way too simple... Actually, that's exactly what you do. It's one of the rare-ish cases in physics where the simple, obvious solution actually works. If you want to cool a bunch of atoms in one dimension, rather than just slowing a beam, you just add a second laser in the opposite direction from the first ("counter-propagating," because that sounds more science-y). The resulting force on the atoms is just the sum of the forces from the individual beams.

And if you remember from the previous post, that force is only exerted on atoms moving toward the laser-- atoms at rest, or moving in the opposite direction, see the laser Doppler shifted away from the frequency they want to absorb, and don't feel any force. This means that, to a simple approximation anyway, adding the second laser has no effect on the force from the first laser.

The real situation is somewhat more complicated-- the absorption isn't an all-or-nothing process, but a continuous function of the frequency-- but when you put it all together and do a huge amount of algebra (I assign this as a problem when I lecture about laser cooling, which makes me incredibly popular...), you find a very simple mathematical form: the atoms feel a force in the opposite direction of their motion that's proportional to the velocity. This is the same mathematical form as viscous drag in a thick liquid, thus "optical molasses."

Okay, but that only takes care of one direction. There are an infinite number of ways an atom could move, so don't you need an infinite number of lasers? No, because space only has three dimensions. Any motion at all can be broken down into x-, y-, and z-components, which are like Las Vegas: what happens in x, stays in x. 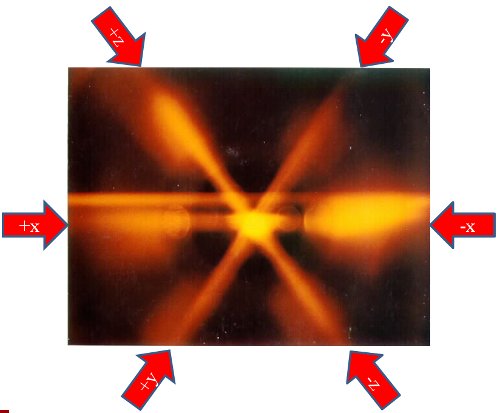 The yellow-orange color in this is the characteristic wavelength absorbed and emitted by sodium atoms (also seen in some street lights), and you can see the three sets of counter-propagating beams for the optical molasses due to fluorescence from atoms in the vapor absorbing and re-emitting light. Right in the center is the molasses region where the atoms are cooled to extremely low temperatures.

It looks like there's an extra horizontal beam in this. That's the slowing laser, because these are loaded from an atomic beam source. The slowed beam is slightly above the position of the molasses, so the lasers don't interfere with each other-- slow atoms from the beam come out of the Zeeman slower, and fall down slightly into the molasses region, where they get stuck in the "viscous" force.

So, using this, you can bring the atoms to a complete stop? Well, no. Even in the simplest approximation, there's a minimum possible temperature, because of the discrete nature of the force on the atoms. Atoms experience a force from the laser because they get a momentum "kick" when they absorb a photon from the laser. They have to re-emit that photon, though, to return their electrons to the lowest-energy state, and that emission also produces a "kick," in a random direction.

The absorption from the lasers produces a cooling force, acting to slow atoms down, but the re-emission produces a kind of heating. Those two effects compete with each other, and give a minimum temperature that can be reached, the "Doppler cooling limit." For sodium atoms, that's about 240 microkelvin, or 240 one-millionths of a degree above absolute zero.

Wow. That's really cold. And you get all that just from lasers? Yep.

Hundreds of microkelvin is pretty awesome. No wonder this stuff is popular. Actually, the Doppler cooling limit is only the simplest approximation. It turns out that, in practice, optical molasses actually works much better than that.

Wait, something in physics works better than in the simple approximation? Is that even allowed? I know, it's completely the opposite of what you expect, a rare violation of Murphy's Law. But it's true. While the very first experiments seemed to show temperatures at or above the Doppler limit, as people did more an more experiments with optical molasses, they started to see strange effects. Eventually, this led the Phillips group at NIST to go back and do a more careful measurement of the temperature of the atoms in the molasses (Paul Lett in the NIST group had been agitating for this for a while, apparently).

When they did, they found a really surprising result: rather than the 240 μK predicted by the Doppler cooling theory, they found the atoms had a temperature of about 40 μK, one-sixth what it should have been. This was surprising enough that they went and invented five new ways of measurin the temperature, and only published the result after all of them gave the same answers, and people in other labs reported seeing similar things.

So, how does something end up working better than the simple theory? Well, there are four pieces to the puzzle, and some of those will need to wait for a later post. One of them, though, is that adding more laser beams isn't quite as simple as I made out above. The beams do affect each other somewhat, because, after all, light behaves as a wave, and you get interference between waves in the same region of space. If the polarization of the waves is exactly the same, for example, you get a pattern of bright and dark spots-- regions where the light is much more intense than the simple sum of the two beams, and regions where there's no light at all. You can avoid the intensity variation by changing the direction of the light polarization, but that doesn't change the fact that the beams interfere-- it just shifts the modulation from the intensity of the light to the polarization. The resulting pattern of light polarizations turns out to be critical to "sub-Doppler" cooling.

The full explanation, however, will need to wait for another post. Next up, we'll talk about how to use light to exert forces on atoms without scattering photons, which is another of the factors that comes into play for sub-Doppler cooling.

You're a cruel tease, you know that? Yeah, well, I need to keep people reading...