On Fear of Parental Perception

I almost killed the Pip last week. By accident, of course, but I do mean that literally. His day care was closed for the day, so I took him out to the store to avoid a freakout when Mommy left. I was heading into the store with him in one arm and a hot cup of tea in the other hand, chattering inanely to him as one does with a toddler, and tripped over the curb.

I took three huge stumbling steps that probably looked pretty comical on the security cameras, but somehow managed to avoid dropping him right on his head, falling on top of him, or scalding him with my hot caffeine. I went down really hard on my right knee-- there's a small rip in those jeans now-- and spilled tea all over my left side, but The Pip only gently brushed the ground. He was startled, but didn't even cry, just looked at me like "What the Hell was that, Daddy?"

I was, of course, tremendously relieved by this, and not just because The Pip was safe (though mostly that-- he's an awesome Little Dude, and I don't want to see him hurt ever). One of my biggest fears as a parent is that someday I'm going to take one of the kids to the emergency room for some injury, and they're going to mistake me for a monster. I'm a big guy, and I know if I go in there with a hurt kid, particularly one who's too young or shy to talk about what happened, there's going to be suspicion that the injury wasn't so accidental.

There have been two previous incidents that would've been worse than this one in that regard. One time when I picked SteelyKid up at day care, she asked for the "jumpy-jump" game, where she jumps into the air, and I lift her up higher and higher by her arms, then flip her over my shoulder, ending up carrying her like a sack of potatoes. It's a favorite of hers, but on this one day, she somehow snagged a finger in my shirt as she went over, and sprained it pretty badly. It was a few days before she could bend it well, but when it happened, I heard a small "pop" right before her shriek of pain, and was convinced I'd broken her finger. And that's Jack from The Shining territory right there-- "We were playing a game, officer, and she just.. got hurt. It wasn't my fault."

The absolute worst, though, was the day when SteelyKid was a baby, and Kate slipped on her way downstairs. Kate wound up with a bunch of painful bruises on her hip and back, and SteelyKid was none too happy, but there weren't any serious injuries. As they were bumping down the stairs, though, I had a horrible image of sitting in a little room explaining to someone in uniform that no, really, she literally fell down the literal stairs.

This fear is almost certainly overblown on my part. The one time we actually did take SteelyKid to the emergency room (SteelyKid was sleeping on Kate's lap, and when I came in Kate tried to stand up quickly and slipped, and SteelyKid fell on the floor), everybody was really nice, and there wasn't a hint of any trouble. The doctor who looked at her didn't even unstrap her from the carrier, just looked in her eyes quickly, complimented her overall cuteness, and recommended putting an icepack on the bump on her forehead. Doctors know better than most that kids get hurt in strange ways, and aren't going to call the cops on everybody.

But, you know, fear isn't always rational. And it's not totally without basis-- when my sister broke her arm falling off the monkey bars in second grade or so, my parents got a severe grilling from the emergency room staff. It didn't help that she'd been running around barefoot on the unpaved road in our neighborhood, and had black bits of tar on her feet. My mother still talks about that. And that was thirty-ish years ago, before a couple of decades of scary news stories aimed at producing ratings-boosting fear, which in turn leads to strict and harsh policies.

So, you know, that's the scary stuff that goes through my head when I'm almost dropping the toddler. Which I won't do in the same way again, of course, but there are an effectively infinite number of stupid ways for the kids to get hurt, so it never really goes away. But just to end on a happier note, here's a cute picture of the kids "scaring" us in a more cheerful way: by running up to the doors of my parents' kitchen and yelling "BOO!" 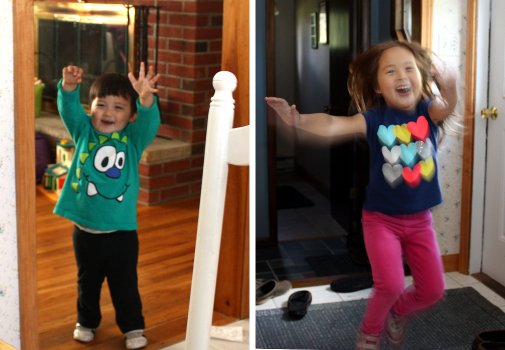 What Sort of New Car Should I Buy?

We spent the weekend down in the Boston area, where Kate was doing stuff at Readercon and I was running the kids around the New England Aquarium and the Museum of Science (nominally in the company of a friend form college and his family, and some of Kate's cousins (respectively), but either…

The Bottleneck Years by H.E. Taylor Chapter 45 Table of Contents Chapter 47 Chapter 46 Boo-Boo, August 26, 2056 I found myself becoming quite anthropological watching Anna learn to walk and talk over the summer. She is a curious and rambunctious child who is always getting into things we thought…

The Bottleneck Years by H.E.Taylor, Chapter 61

The Bottleneck Years by H.E. Taylor Chapter 60 Table of Contents Chapter 62 Chapter 61 Crystal Jellies, March 19, 2058 The first time I saw a telescopic view of the L1 sunshades, I remembered standing in an aquarium watching crystal jellyfish. These tiny, delicate creatures were so beautiful I…

And here I was thinking I'm a big worrier, but you beat me - I guess I'm as far off "big guy" worries as one can be. But every parent that I talked to has their "near miss" nightmare stories, my most recent one involves a hair dryer that Gloria decided needs washing. Yeah, these things really happen. I'm afraid the worries aren't going to go away any time soon, not until they outgrow their parents. Which in my case might happen a little sooner than in your case though :p

Tell me about it. My 10-year-old son fences foil and pretty much always has an assortment of bruises - often finger-tip size - on his upper chest, right arm and thigh, and the inner thighs around the groin. I'm always worried that somebody is going to take one look at him in the shower at his swim class and call it in to CPS.
That actually did happen to another family at his old school when an over-zealous health aide thought she was onto something. And while abuse is all to real, in that case, there was absolutely nothing there, the aide looked like an idiot, and the end result was a very public dispute with the school and two families leaving in the middle of the school year.

When I was ~4yo, I had a tendency to "trip over black heel marks" -- I'd be walking along perfectly normal and then bam! faceplant. After my parents took me to the ER two or three or four times, CPS came for a visit. Apparently the interviewer refused to believe in spontaneous uncoordination until I walked by and faceplanted right next to her.

Wait til your kids start sports: t-ball, soccer (peewee leagues start age 5), martial arts (starting age 6); all leave marks, though the kids are generally verbal enough to explain how they got them.

I'm a new father. Every time I catch my foot on something when I'm holding him my heart skips a few beats. Glad to see I'm not the only one worried about explaining something awful to hospital staff.

@Dave #2: Just have him switch to sabre and he can trade the "finger bruises" for long slashing welts!

@Katatonic #4: In my experience (soccer most of my life, karate in the last 6 or 7 years), I've a had a lot harder contact in soccer than in karate. But then I also do a lot of goalkeeping and I can be pretty aggressive in going for balls in the goal area.

I’m a big guy, and I know if I go in there with a hurt kid, particularly one who’s too young or shy to talk about what happened, there’s going to be suspicion that the injury wasn’t so accidental.