This year's "Flame Challenge" is to explain color in terms an 11-year-old can follow. I have opinions on this subject, a background in AMO physics, and access to scientific equipment, so I'm putting something together. In the course of this, though, it occurred to me to wonder how my different portable computing devices process color. And since I have access to an Ocean Optics USB4000 spectrometer, I can answer this question in more detail than anybody needs.

So, I have three principal electronic devices that I use to do computer-type things: a Moto X smartphone, an iPad, and a Lenovo ThinkPad laptop. So, I had all three display a flat white screen, put the spectrometer probe up against the screen, and generated the following graph: 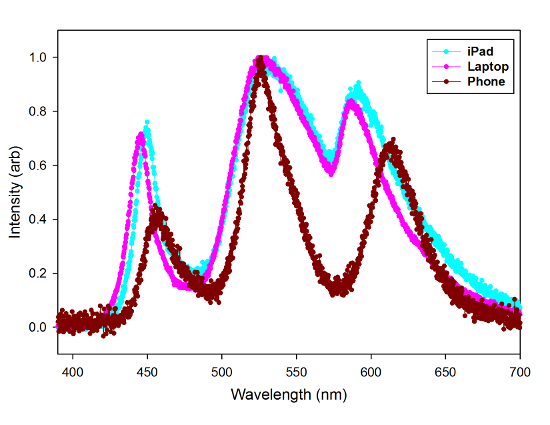 Spectral comparison of my iPad, laptop, and phone all showing white screens.

All three of these show three principal peaks, corresponding to the red, green, and blue pixels making up the display. You can see that the iPad and laptop are pretty similar, but the phone is strikingly different. If you isolate the red component from each, you can see the difference more clearly: 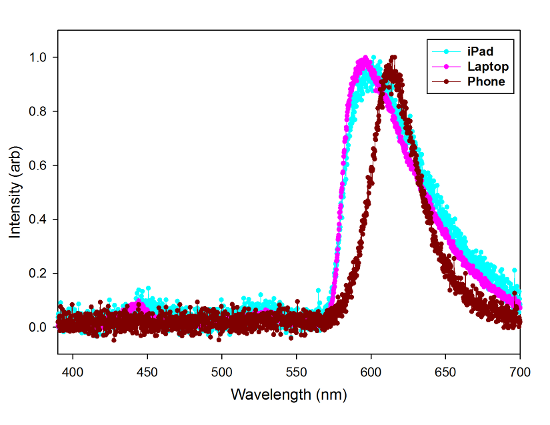 (These are normalized, making the peak intensity the same for all three.) The iPad and laptop have a little bump out in the blue, which isn't there on the phone. The red light from the phone is also a little narrower, more symmetric, and slightly longer wavelength at the peak.

But the difference is most pronounced with the blue component: 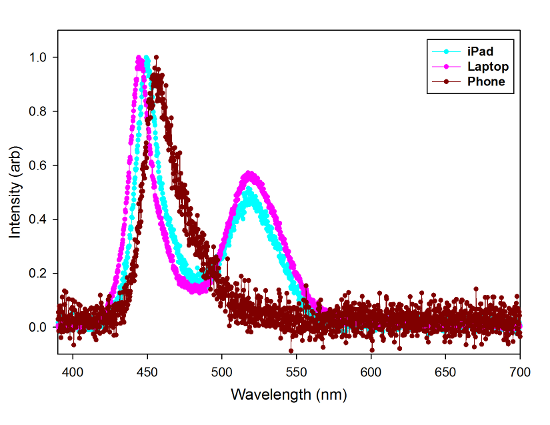 Again, the phone is a bit narrower and slightly longer wavelength, but the most striking difference is that the iPad and laptop both have double-peaked distributions, with a substantial amount of green light in the blue display.

I was kind of surprised to see this, though I'm not sure exactly why, given that I don't know what the light sources are for the different devices. A bit of Googling suggests that this is because the Moto X uses an organic LED display, which is directly producing light in three specific bands, while the iPad 2 uses a backlit display with a broadband source and color filters to get the red, green, and blue. This blog post is talking up a different technology, but includes a nice graph of the basic filter situation. The laptop is a Lenovo Thinkpad X220 and of similar vintage to the iPad, so probably similar display technology.

Probably the most striking thing about this, though, is how little difference it makes. That is, if I put the phone right next to the laptop with both showing blue, I can see a difference between them, but despite the dramatic difference in spectra, the difference in appearance is really, really subtle. Which just goes to show you the kludgey nature of the way our eyes process color. Which is a good deal of the point I want to make for the whole "Flame Challenge" thing, which is why I was looking at my laptop with a spectrometer in the first place...

(The photo above is my office on campus, if you were wondering. Note the stack of obsolete textbooks used to prop up the desktop monitor, and the cool Einstein marionette in the background at right.)

Neat. We use one of those Ocean Optics spectrometers for a couple of our Physical Chemistry labs (an atomic emission lab of H and He as well as a Raman spectroscopy lab). It's fun to point it up at the lights and show the students the three bands in the fluorescent lights as well as the atomic lines from Hg. Never thought to look at computer displays.

Our iMac flat screens emit polarized light(I think other flat screens do too). Hold up a clear plastic protractor or ruler In fromt of screen and view through polarized sunglasses etc.

One would gain deep insight into the functional nature of color by administering N,N-dimethyltryptamine to congenitally blind volunteers. Color being generated directly within the brain would be illuminated by unbiased observers' comments upon the phenomenon.

from a Hopfield paper:
The size of N(number of receptors) is qualitatively important. We have intuitive feelings for the case N = 3 from color vision. If light from different sources are mixed together, all three channels will usually be mixed, and there is no reliable way to tell whether a ‘‘target’’ hue is present or not. For example, light of 5,100 Å and of 4,900 Å wavelengths are quite distinguishable shades of green but drive chiefly green and blue cones. Because of this, a particular mixture of 5,100- and 4,500-Å light produces an exact visual color match to 4,900-Å light. N =3 is a small number.

So you have OLEDs and LCDs represented, but how do the phosphors on a CRT compare? If your lab is anything like any of the labs I've ever been to, I'm sure you have a clunky old monitor somewhere, running some ancient piece of equipment or the other. (As a final note, if you're trying to be complete, you might also want to track down someone with a plasma TV, or at least smuggle your spectrophotometer into the local Best Buy.)

@Will - All LCDs use polarized light - rotating/not rotating the polarized light with the liquid crystals is how they turn on and off the pixels. As you said, this allows for some interesting effects: A professor near me put polaroid on his office door window - so you can look into the room and see if he's in before knocking, but you can't see any of the potentially confidential information on his computer screen.

The iPad has very strongly polarized output, because when the weather was nice and I could work outside, I was unable to read it in one orientation with my polarized shades on. I tend not to stand the laptop on end, but a quick check just now suggests that both it and my desktop monitor at work are polarized at 45 degrees to the vertical.

The phone is not noticeably polarized. It's dimmer through the shades, but doesn't go black at one particular angle the way the other devices do.

Maybe I'll grab some photos, and do another post on this.

There actually exist dedicated devices to calibrate monitors. These are used by artists to be sure that the monitor provides an accurate representation these are called colorimeters.
If you are a serious commercial user of say photoshop you want to be sure that color is represented the same on different devices. A link to wikipedia about this: http://en.wikipedia.org/wiki/Color_calibration.
If you are on windows 8 or windows 7 in the control panel there is a color calibration tool called display color calibration that will allow one to adjust the colors on a monitor or other device to a setting. You could use the spectrometer to as the equivalent of the device.

You might see if the smartphone or ipad have similar settings .

After looking around a bit I did find an app for an Ipad. It uses snyder 3 color calibration device connected to a usb port on a pc, and then over the network to an ipad. So with this software and the equivalent on a pc you could get images very close to the same.