Ages and ages ago, I posted the picture that's the "featured image" above, and asked people to submit physics comments about it. Then I got distracted by a series of shiny things, and never did anything with the handful of responses I got. Because I'm a Terrible Person.

Anyway, it's long overdue, but here are the responses, with some comments from me. The first to send me something was Keith Hester, who emailed:

I find quite intriguing the lengthy unbroken --- and seemingly unsupported --- extension of snow that has slid over the left edge of the roof. The coefficient of friction between the roof (fabric?) and the snow must have been quite low… and additionally, the internal molecular bonds within the snow pack must be quite high to preclude any of it breaking off. It appears that all of the roof's original snow pack has remained quite intact!

I suspect that the initial sliding down the roof occurred at a higher temperature… followed by a rapidly lowering of temperature converting the overhanging snow to mostly ice. I would not expect the snow to otherwise demonstrate such high internal bonding sufficient to preclude its breaking!

Whatever… that snow overhang is rather impressive!

I agree that it's impressive, but it wasn't a re-freeze. The overhang was a transient phenomenon-- a couple hours later, the snow had completed its slide off the awning. In a similar vein, commenter Lyle relates this to the physics of avalanches.

I suspect you are seeing the same sort of thing as the slabs of snow that are involved in avalanches. A slab of snow develops a binding of some strength, and in the case of an avalanche a weakness zone develops on the bottom. At some point the weight of the upper zone exceeds the weakened strength of the boundary and the avalanche occurs.

The picture shows a slab of snow that has frozen together a bit (likely it was a wet snow) and things got colder so it consolidated at least somewhat.

Then you notice that the cloth has a sag in the middle between the supports, that was there before the snow slid. The sag was enough to halt the slide at least for a while.

It's interesting to think about whether we could do anything quantitative with this. From the luge physics post, we know that in sliding on a slope with friction, we have an acceleration of:

But, of course, that's an underestimate, because something like half of that snowpack is hanging off the edge, not contributing to the frictional force. If you figure that in, the effective coefficient would be much higher-- something like

which would be around 1.7 based on the aforementioned pixel-counting. And, of course, the result would change over time, as more of the snow slips off the edge, increasing the force pulling down the slope, and decreasing the amount of sag. There's presumably a tipping point to this, where everything suddenly slides off the edge; for extra credit, code this up in VPython, and send it to Rhett for grading.

In other comments, Mike Winichenko points out that there are two interesting questions:

1. Why snow remains whole after going off the roof?

I think, snow is transparent, light warms the roof, wet snow at bottom freezes at night making an icy base. After sliding a little off the roof part of this base near the edge of the roof is exposed to a warm water flow. It melts the base, but in wet snow surface tension keeps it from breaking.

Eric Lund disagrees that this is about melting, preferring a wind-based explanation, but I think Mike's probably on to something. This was a sunny day, and the far side of the playset was clear, the snow that had settled on it having crashed down some time before. The side with the overhang faces north(ish), and thus held out for longer. I think there's some melting of the bottom layer that lubricates the flow of the snow pack, letting it slide as a unit.

The question of internal forces is an interesting one, but it's harder to get any grip on. I think you could probably use the same calculation as above to estimate the differential force on the two pieces of the snow slab-- if we say for the sake of mathematical convenience that half of it is hanging off the edge, unsupported, that half is subject to a net force that's something like:

where FT is the internal tension force between pieces. The piece on the slope, on the other hand, is subject to a net force that's something like:

If nothing is moving, this tells us that the internal tension force is equal to the weight of the free-hanging snowpack. This could presumably be used to determine the tensile strength of the snow, provided you had a good estimate of the mass. Which would require knowing the density of wet snow, which I don't. You can get an upper limit on it, though, from the fact that it can't be higher than the density of water-- snow is, after all, frozen water, which expands as it freezes, and even wet packed snow will contain air pockets and so on, lowering the density.

Looking at the photos, I would say the free-hanging part is maybe a meter and a half wide, two-thirds of a meter wide, and maybe 5cm thick. That's a volume of 0.05 cubic meters, which would give a mass of 50kg if it were liquid water; scale that down by whatever factor is appropriate for wet snow, multiply by ten (for the strength of gravity), and you get the force that the snow right at the bend is sustaining. Which is probably a couple hundred newtons or so, which is kind of impressive.

And, finally, Chase Boulware emailed a somewhat related picture of snow peeling away from the wall of a building in Michigan: 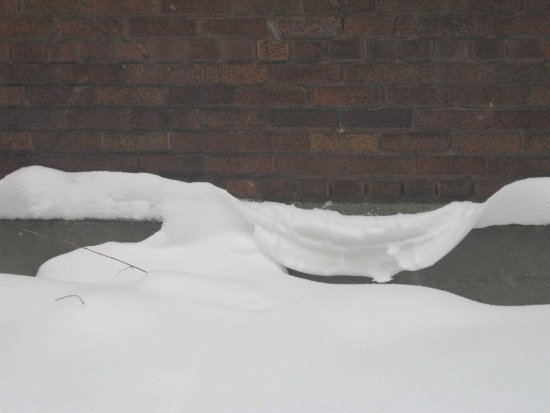 Snow peeling off the wall of a building. Photo by Chase Boulware.

This is also very cool, particularly the part where you can see the impression of the bricks in the peeled-off bit. I'm not sure how that whole thing works, or why just that bit of the snow is pulled away, but it's a neat image.

And that's what I have about the physics of melting snow.

I found an interesting web site on Avalanche Physics at the university of alaska : http://ffden-2.phys.uaf.edu/212_fall2003.web.dir/Sarah_Schlichting/Aval…

It describes the theory, and also in the cornice section shows something similar to what the picture of the play set shows. And another site at UAF :http://ffden-2.phys.uaf.edu/211_fall2004.web.dir/Jeff_Levison/The%20Phy…

It also turns out Montana state runs a course for teachers on avalanches so they can teach it. (Makes sense as the backcountry there could be full of avalanche threats)