Oh the weather outside is frightful,

But the fire is so delightful,

And since we've no place to go,

Yesterday in the late afternoon (and yes, it's dark by late afternoon here in Portland, OR), I looked out the window and saw a rare sight for this part of the world. 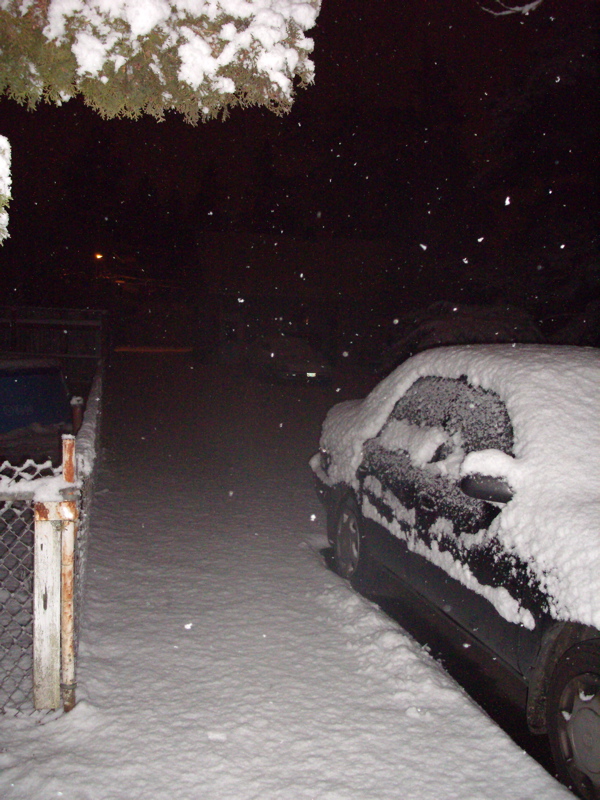 That's right, it snowed here! So, what did we do? We went out and played in it, like children, because it's fun. 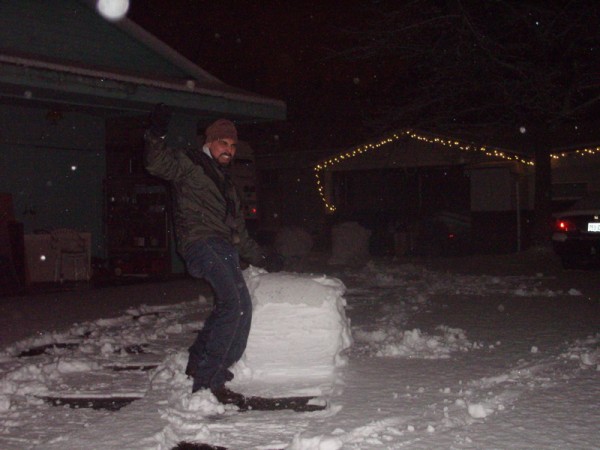 It was a good snow. For me, that means it wasn't too powdery, and didn't fall apart when you tried to make snowballs out of it. (Clearly.) In fact, it was good snowman-building snow. 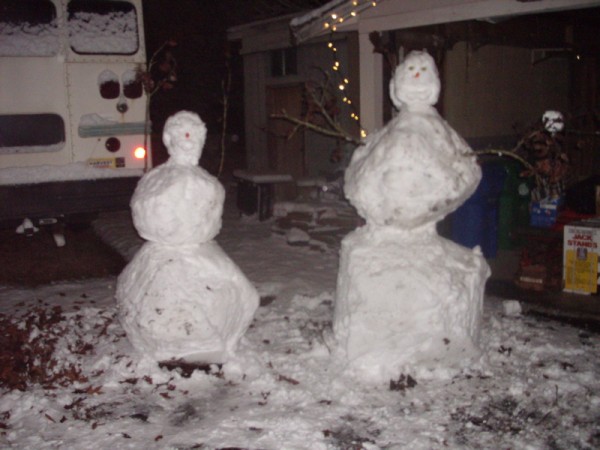 But by time I came outside this morning, a light rain and temperatures in the 40s had made the snowmen just a distant memory. 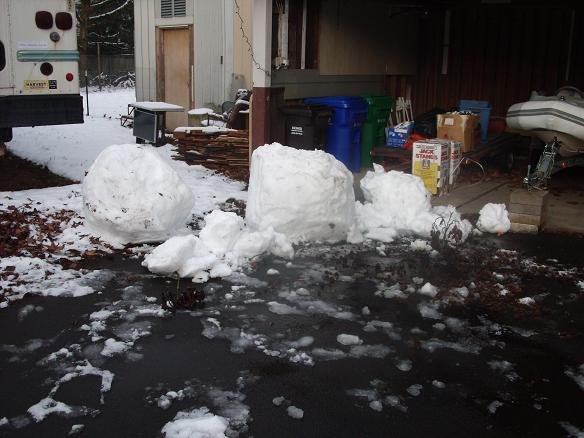 Well, I was asked a very good question (thanks, Pamela): what determines the consistency of your snow? You probably know of four types of snow (classifications are mine and unofficial):

Snow, with only slight magnification, is clearly made of ice crystals: 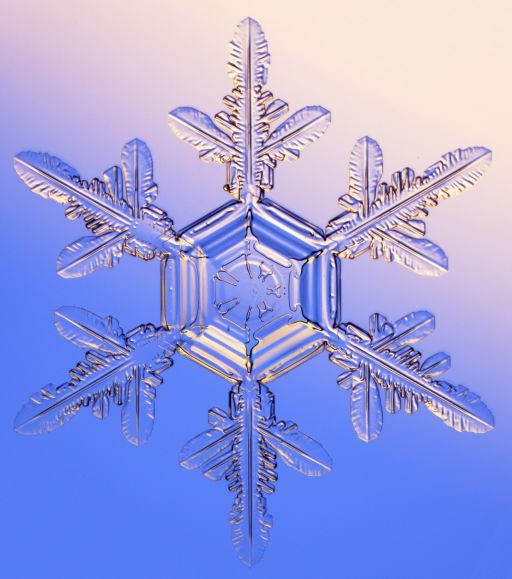 Put simply, what type of snow you have is all about temperature. If it's cold enough, then the mechanical energy of smashing these individual flakes together isn't enough to cause any of these crystals to melt, and they won't stick together. That's what "powdery" snow is.

You heat the temperature up so that it's close to freezing, however, and now your snow will "stick" together. (You can do this with powdery snow by taking off your gloves and holding a ball of it in your hands tightly for a few seconds, as many 9-year-old boys will tell you.) How? You melt some of the crystals briefly, which re-freeze together almost immediately into a different crystalline structure, where the water molecules are now bound together! This is what makes "sticky" snow. 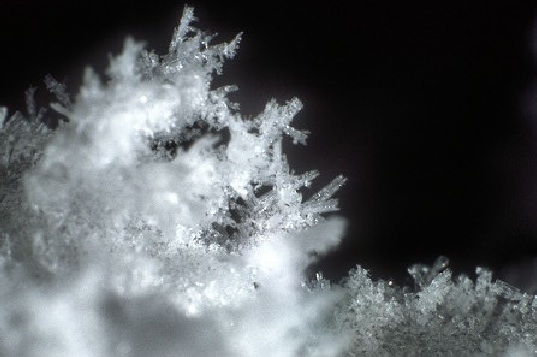 Want icy snow? Just melt more of it more thoroughly, then re-freeze it. Congratulations, you've just made icy snow. (Which I'll admit is much more of a sheet of ice that looks like snow.)

And as for the slush? Leave the re-freeze part out, where it's more liquid than ice crystals, and you've got slush. It's all about temperature, and whether the structure of your crystals remain intact or not.

This leads to one of the coolest things you can do with one of the most fun "ice" products out there: dippin' dots! 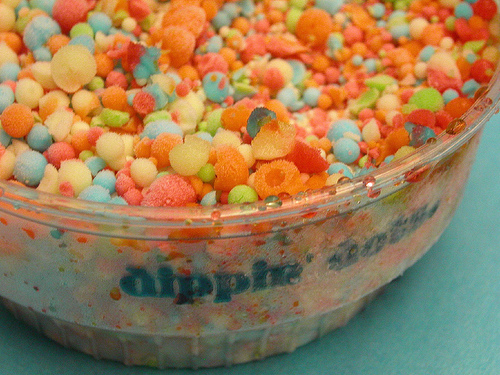 Dippin' dots are made by dipping melted ice cream -- drop-by-drop -- into liquid nitrogen, so that it freezes into little ball-like shapes. The ice crystals throughout are packed solid, and as long as you keep them at super-cooled liquid nitrogen temperatures, they remain in a dot-like shape.

But if you move them into a regular freezer? 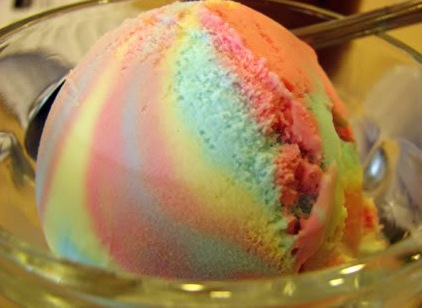 Even though the temperature never gets above freezing, the ice crystals have enough energy in them that they no longer retain their individual, 77 Kelvin shapes, and meld together. All you're left with is regular, rainbow ice cream. (There are many different phases of ice, as made famous by Kurt Vonnegut.)

So that's my snowy story! (It's pretty much over, too, as less than 24 hours later, there's hardly any snow left!) It was fun while it lasted, and I wish you all a Happy New Year!

You run an excellent blog!

Fellow Portland-ite here... yesterday was a nightmare for anybody needing to drive!! Took me 4 hours to go 10 miles. Some coworkers spent as much as 5.5 hours getting home, others simply stayed in hotels or at work.

Anyway, fun blog, sounds like it was loads of fun if you weren't stuck in a stupid car. Portland just can't handle snow.

Ha! My snowman was much better than yours ;-)

"Cool", but I think it's a bit more involved than this, as even this primer describes. See also this morphology diagram.

After Christmas, I drove home from my family's headquarters in north-central Indiana to my home in Cincinnati. That is, I drove from one microclimate (eastern prairie) into another (Ohio valley). There were snow flurries all day in both microclimates, but at the boundary between them (on I-74 between Shelbyville, IN and Batesville IN, if you're following along on the map), my car built up a significant layer of rime all along the leading edges.

Rime is not necessarily a word we use everyday in the modern world, but as I am a literature buff familiar with Samuel Coleridge-Taylor, William Henry Dana, and Edgar Allen Poe, I knew exactly what I was seeing on the windward side of my little Honda Fit when I pulled into the Gas America station to scrape that shit off before continuing on my way. Rime -- not dry, powdery, sticky, icy, or slushy, but a pain in the ass when it renders your windshield wipers useless and you can't see the road in front of you.

This is cool: For those of you in other parts of the world, google "I-74 between Shelbyville and Bateville." Click Maps, zoom out three or four times, and then click Terrain in the Map window. You'll see exactly what I'm talking about regarding the boundary between microclimates.

Nice to see the map confirm my personal experience.

I would like to say that for cross country skiing you want skicky (or glue as we call it) snow which then gets packed by fabulous groomers and then a warm day to get a little nice tough layer and then freezing cold temps for great fast skiing, I really like skiing on a lake (cause they are flat) on a cold night a sunny day because it is super quick if it is well groomed. MMM well groomed. Icy snow itself just means breaking trail which no one likes. (well I'm sure someone but not me!)

Also I'm suprised how many people don't know basics of snowpeople/fort/animal making. Always use clean snow if possible (dirty/salty snow melts faster). Always pack it good or smooth the sides. Pray for a good ice coat but not a melty ice rain. This way you can get a great snow fort to last all winter. (We made a fantastic on in MN on Xmas. It should last with its great gothic arches thru a few 30+ winter days.)

A very happy New Year to you and your family - I've enjoyed your blog a lot and look forward to more next year.

I'd recognize that snowflake anywhere!

Ah, if only I had money - building a snowflake camera and snowflake growing machines would be such fun!