As I've mentioned here before, I do a lot of work these days in my local Starbucks. This is slightly ironic, as I don't like coffee-- instead, I order tea, which I put in an insulated travel mug. I tend to get the tea, carry the mug back to the table, and let it steep while I boot up the laptop, then pull the teabags out. I get a hot water refill after I finish the first mug, and take it over to campus if I'm going in that day, and those generally carries me through the morning.

At some point, I noticed that when I had the cap on, I tended to end up with a small puddle of liquid next to the cup, either on the table, or in the cupholder of my car, dripping off the strings of the teabags. This seemed to be more pronounced when the cap was on-- if I screw the cap down, I generally find drips on the table by the time the laptop is ready, but if I just carefully carry the mug with the cap off, I don't. This struck me as odd, but on thinking about it, it makes a certain amount of sense in terms of capillary action.

Capillary action, as you may or may not know without reading that Wikipedia link, is the phenomenon where water will "climb" up a narrow tube inserted into it. One of the curious things about this is that the water will spread farther as the tube gets narrower. My tea was escaping the mug through the wicking action of the teabag string, which is basically a capillary phenomenon-- water gets pulled into small spaces between the threads, and moves up the string. It's conceivable, then, that the cap could enhance this process, by compressing the string and making those spaces even smaller, and increasing the capillary action.

(I have prior experience of this, from an undergraduate research project nigh on 25 years ago. We were trying to look at a Kerr effect in a liquid sample, to see a rotation of polarization that was quadratic in the applied electric field. Doing this required a fairly large electric field, so I made a sample cell that was two metal electrodes with about a millimeter between them, and filled the gap with the liquid. Then I glued a microscope slide on the top of the electrodes to seal it up so the cell wouldn't leak, whereupon all of the liquid between the electrodes sucked up into the tiny gap between the slide and the metal, leaving nothing in the larger gap where we wanted to see the effect...)

So, this seemed like a phenomenon in need of further investigation. Which I did using the highly sophisticated apparatus you see above, consisting of my travel mug, a teabag string, and a small graduated cylinder (10ml capacity) borrowed from my lab at work. I filled the mug with hot tap water with one end of the string inside, and the other end in the top of the graduated cylinder. Then I waited a while, and measured how much liquid dripped into the cylinder.

In keeping with good scientific practice, the duration of each trial was set by whatever else I needed to do-- answering a bunch of email, walking the dog, eating dinner-- so for a fair comparison, I divided the amount of liquid wicked out of the mug (which varied from 0.4ml to 1.8ml) by the length of the trial (which varied from 27 minutes to 64 minutes) to get a flow rate in milliliters per minute. Then, I made a graph, because that's what I do: 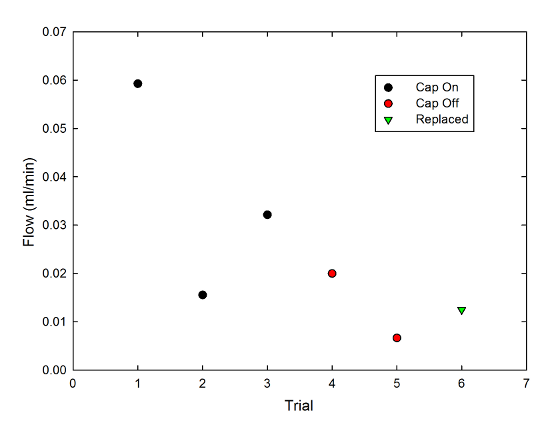 The black circles are with the cap on, the red with the cap off, and the green triangle is a case where I replaced the cap after the second cap-off trial. There's a lot of variability, here, but if I average together the cap-on data points I get a flow rate of 0.036&pm;0.013 ml/min (0.030&pm;0.011 ml/min if I include the replaced-cap point), and the cap-off points have an average of 0.013&pm;0.007 ml/min. It's not a hugely significant difference, but it is consistent with my anecdotal impression.

There are a bunch of caveats to this, though, chiefly that this is hugely material-dependent. In fact, it took a while to get this to work at all, because I first tried it with kitchen string (the stuff you tie meat with for roasting purposes), which produced no flow at all. that's much thicker, and may be coated with something to prevent it absorbing too much juice during cooking, but strings from the Twinings tea bags I use at home didn't produce anything useful, either. I ended up keeping the strings from several days' worth of Starbucks trips and using those for the above tests. Each of the data points is a new string (so it started out dry); the scatter in points may reflect differences between strings.

And just for fun, I also repeated this with two narrow strips of paper towel, a material specifically designed for its wicking properties. Adding these to the graph gives: 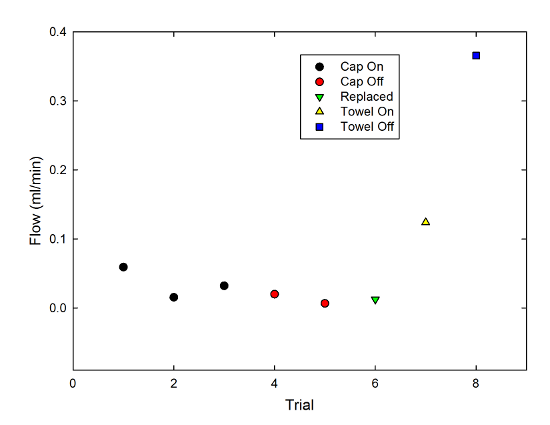 Flow rate for both teabag string and strips of paper towel.

You can see that, as you might well expect, the flow rate is dramatically higher for the towel than the string. Also, the effect of the cap is opposite-- the cap-off case produced a higher flow rate by around a factor of 3. Constriction was an obstacle to the wicking behavior there, which it clearly was not for the string.

So, what have we learned from this, other than "Chad is an enormous nerd?" (which we knew already...) Well, basically, that capillary action is complicated. To really do this right would require a lot more fiddling around, and more careful control of the parameters, investigation of more fibers, etc. Which could be fun, but seems like a lot of work, so I'll just leave it here.

Interesting. My assumption would have been that the increased mess with the cap on was due to condensation.

Condensation where?
The cap is pretty well airtight, so the only way for water to get out is via the string.

Condensation on the cap, which doesn't insulate as well as the paper cup (probably).
Vapor would condense on the cap, and trickle down to the string, increasing the availability of fluid at the string/cap/cup interface of what was experienced without the cap.

Capillary rise occurs on hydrophilic surfaces (re contact angle). One need but have a polypropylene fiber tea bag string to end the problem with capillary depression. This is a useful solution to other inconvenient wicked leakages, providing an interesting non-example of Equal Opportunity.

It is most interesting to see how water can defy gravity and physical laws to move without the use of technology. I also thought that the phenomena could be explained by condensation but this is truely remarkable. I think water has a lot of properties that are stil unknown to us. Can this behavior of water be explained by the means of osmosis?