Long-time readers will remember that I used to do weekly kid-blogging, posting pictures of SteelyKid with a reference animal, Appa the sky-bison from the Avatar cartoon. I stopped a couple of years ago, because SteelyKid started being reluctant to pose for the pictures every week.

I got her to pose for a few yesterday, though, so we can see what a difference 260 weeks makes. Here's the first really good Appa-for-scale picture, one week after she was born: 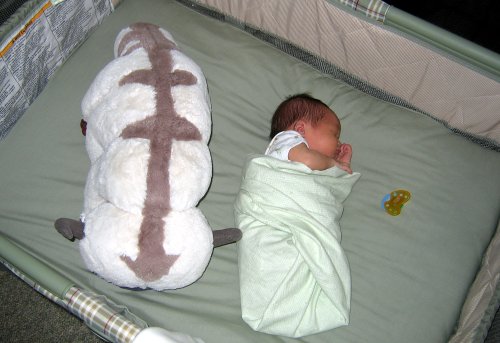 And here they are on her fifth birthday (also the "featured image" for this post): 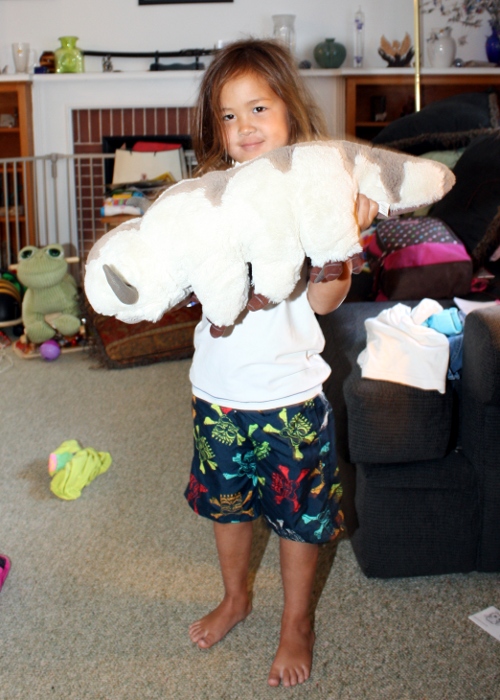 SteelyKid and Appa on her fifth birthday

Just a little bit of a difference...

And just for really old-times' sake, here's a compilation of the first year of Baby Blogging photos:

If you prefer living-in-the-future to reliving the past, here's a photo of SteelyKid with her big birthday present: 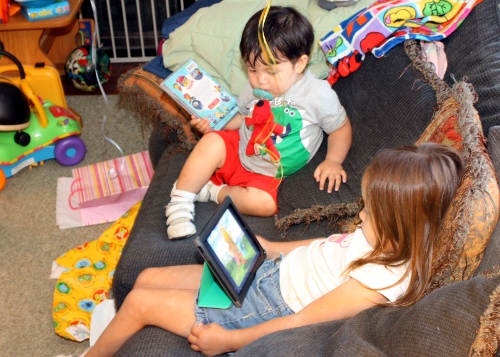 SteelyKid with her new tablet.

We got her one of the Nook HD tablets Barnes and Noble is selling cheap these days. This will require strict rules and parental controls, but she's very fired up for it. It makes me feel old, though, because the cheap portable computer I just bought for my five-year-old is more powerful than any of the computers I used up through graduate school...

Last in a series of themed collections of pictures. These ones are showcasing my rudimentary GIMP skills, pasting together multiple pictures into composites. 276/366: Sky-Bison for Scale One of the earliest happenings in the three-week period I'm dumping photos from was SteelyKid getting strep…

SteelyKid was born five years ago today. I'd try to be clever and schedule this for exactly five years to the minute of her time of birth, but I've mercifully forgotten exactly when the delivery was, only that it was early in the morning after a very, very long night. Here's what she looked like…

SteelyKid was in an exceptionally happy mood the other night, and so I not only got the silly face shot from the previous post, but also this more traditional Toddler Blogging picture, with Appa, no less: All together now: Awwwwwww.... Appa, you may or may not recall, has served as our standard…

Instead of "feeling old," you could just call it "living in the future." Except for the flying cars, we seem to have already acquired much of the futuristic technology we've all been promised, and our kids treat it as normal (when she was three, my daughter started squiggling her finger over an empty notepad, and told us she was "checking her e-mail" :-).

Who needs cats? The internet is for baby pictures!

Beautiful collection. And what's on your son's head?

congrats to one & all!

Young CC Prof, that is the ribbons from some balloons that their great-aunt and uncle sent as a present for SteelyKid, dangling down into the frame.