"But when I'm alone I get scared."

"Well, I can put on some music if you like. You can listen to that, and it might give you something else to think about."

"I don't know if you've noticed, but when I sleep, I always put music on, because it helps me feel less lonely."

"The music helps, but I still worry about things. Like bad guys. And the evil snakes from Lego Ninjago. I worry that they might be around, and then I start to think that they're behind me, and I feel like they're looking at me. And then I get scared and I can't sleep."

"Well, you know, you don't have to worry about the snakes in Lego Ninjago, because they're not real."

"But what about the bad guys?"

"Well, you know what? You don't have to worry about them, either, because the only way into your bedroom is through that door, and you know who's on the other side of that door?"

"Emmy. She's right outside, and she won't let any bad guys get to you. She'll bark at them and bite them."

"Yeah, but what if the bad guys dressed up like you and Mommy?"

"Because she's got an excellent nose."

"Oh, yeah! And she knows how we smell! So if bad guys came in dressed like you, and they tried to come upstairs, she would smell them. And she'd know that they aren't you, and she'd know that they're bad guys. Then she would bark at them and bite them. And then you could come get them, and she would bite them so they couldn't get away, and you could grab them and rip off their clothes, and it would be somebody else!" 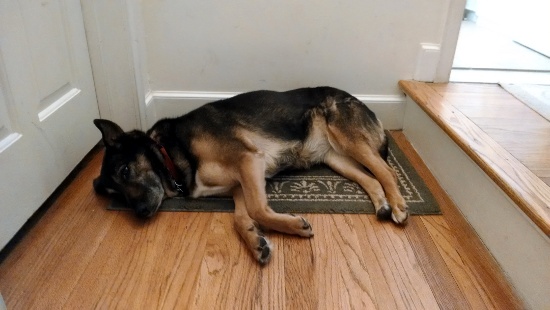