How Fast Is SteelyKid's Nerf Gun?

SteelyKid is spending a couple of days this week at "Nerf Camp" at the school where she does taekwondo. This basically consists of a bunch of hyped-up kids in a big room doing martial activities-- taekwondo class, board breaking, and "Nerf war" where they build an obstacle course and then shoot each other with dart guns. Which, of course, required the purchase of upgraded Nerf weaponry, as seen in the "featured image" above.

This thing fires darts at a fearsome speed-- they hit the ceiling with really loud "thwack" that was a huge hit with both kids. Of course, you know what's coming next, given that she has a new toy gun, and I have a camera with a high-speed video mode:

There are two short clips here of SteelyKid firing the gun in front of a wooden ruler for scale: one at 480 frames per second, the other at 1000 frames per second. Of course, the obvious thing to do with these is to crank them into Tracker Video and measure the speed of the darts. This turned out to be needlessly complicated because digital video formats are stupid and evil-- in fact, the main reason I pasted those clips together in the YouTube video above is that the raw video from the camera didn't behave properly in Tracker. After an inordinate amount of work, though, I got the following graph of the dart position as a function of time: 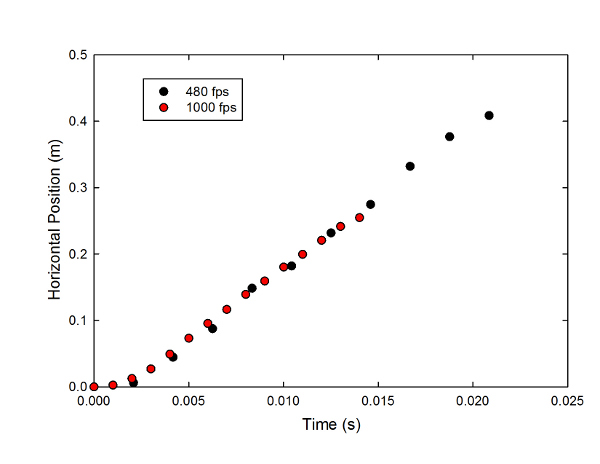 As you can see, each of these produces a very nice straight line (after a frame or two delay at the start of the analysis, to set the zero position). The field of view for the 1000fps setting is smaller than for the 480 fps setting, so that track stops sooner. But both sets of points agree very, very nicely with each other, which is great.

I can fit straight lines to both of these, and get the speed of the dart, which comes out to 22.1+/-0.3 m/s from the 480 fps data, and 20.9+/-0.2 m/s for the 1000 fps data. Those don't quite agree within the statistical error bars, but given that both images are pretty blurry, I would say they agree within the uncertainty imposed by my scaling. That's a speed of about 47mph, if you favor American units of measure, or "pretty damn fast for a toy dart gun" in any system of units. Fortunately, the darts are really light, so don't hurt all that much even if you put your hand six inches in front of the barrel and let SteelyKid fire a pair of darts into it. It doesn't feel good, mind, but it's not that bad...

One more quick item from this: the box proudly proclaims "Shoots up to 75 feet!" a claim that positively demands further investigation, because it doesn't specify some critical information. Specifically, it doesn't say anything about the angle of launch, or the direction of measurement, and the actual range of a projectile will depend critically on both of those.

We can say something about whether this is a reasonable claim, though, using the measured velocity and basic intro-physics kinematics (in the form of the trajectory calculators at HyperPhysics, because I'm lazy). If you do the lazy-physicist thing, and ignore air resistance, a projectile with an initial speed of 21 m/s launched at 45 degrees for maximum range would travel about 45 meters, or almost 150 feet. Of course, ignoring air resistance is a terrible approximation for lightweight Nerf darts, so that range would be much shorter. Is half as much reasonable? I don't know, probably.

Interestingly, if you take that same launch speed, and direct it straight up, you find a predicted maximum height (ignoring air resistance) of about 22.5m, or just a hair under 75 feet. So, the real question here is, does the "Shoots up to 75 feet!" claim come from experimental tests to measure the maximum range of the real darts, or does it come from a lazy freshman-physics calculation for a vertical launch?

The only proper way to test this would be to go somewhere and make measurements of the true maximum range. As the outdoor temperature is currently in the negative Fahrenheit range, with a wind chill down low enough that you don't need to specify units, though, I think that will have to wait for spring...

My son went through a big nerf phase. He discovered a couple of things. The first is that nerf darts fit really well into PVC pipe and you could use air to make them go. He made blow dart nerf guns -- including ones that could shoot around corners. He also built one that used sublimated dry ice to power the shot. He got a dart to travel 207 feet.

It's clear: the gun shoots UP to 75 feet. It doesn't say how far it shoots down, or forward.

Can you get the spread of the projectile mass and figure out if that's contributing to the difference in velocity? I would expect the thing to be relatively constant here would be the kinetic energy.

Using a WAG of 100 g for the projectile mass, that's a kinetic energy of 20-25 J. Which would sting if it hit you in a sensitive spot. I, too, would expect little variation in the kinetic energy at launch.

Your WAG is wayyy off. Like, two orders of magnitude off-- I put 10 of the darts on the balance scale that SteelyKid got for Christmas, and they come in at about 10g. So, 1g per dart.

A baseball is about 140g. If this were firing 100g darts, it would do some serious damage to any kids playing with it.