The Pip is in a big superhero phase at the moment, and all of his games revolve around being a superhero of some sort. He has also basically memorized a couple of 30-page Justice League books, after demanding them over and over at bedtime. As I did with SteelyKid, I make a game out of reading the wrong words from time to time, and as a result, he can now "read" at least two books all the way through, as you can see from this cell-phone video shot at bedtime:

His superhero pretend games have the bizarre inventiveness you expect from a pre-schooler, mixing and matching from all the various media continuities he knows. On the playground one day last week, he was Superman, I was Batman, and SteelyKid was Wonder Woman, and we first had to capture all the characters from Jake and the Never Land Pirates (including the puny pirate heros; asked why, he said "Well, Jake and Izzy and Cubby were going after the bad guys, but we're the superheros, so we're the ones who have the get the bad guys."). Then we had to rescue Elmo from Cookie Monster, followed by rescuing Big Bird from "the cookies that sprang into action" after the capture of Cookie Monster. Then we smashed Zach Bots from Wild Kratts.

Yesterday, he was either "Blaster" or "Blast Man" (he couldn't quite keep it straight), with the power to blast bad guys by striking the pose seen in the "featured image" up top and making a blasting noise. There was a lot of blasting of me in my role as the notorious villain, the Tickler, then I suddenly switched sides, as he asked for advice on who to blast next. I suggested he go to Sesame Street, hoping it would prove to be located in another room of the house. He liked the general plan, but did mention that it was a long way to Sesame Street.

"No, Blast Man doesn't have flying power. I have BLAST POWER! I blast bad guys."

"OK, but how do you get to where the bad guys are? Do you have a plane?"

"Well..." (he starts most of his exposition with "Well...") "I make a loud noise, and then birds come, and they pick me up in their beaks, and fly me where I need to go."

I asked for a demonstration, of course, so he stood up, squawked like an angry blue jay, then spread his arms, and said "Look! They're carrying me! I'm flying!" and ran in happy circles around the house.

Now, you might be thinking "That sounds like a wildly impractical means of travel" or possibly "Are those African swallows?" but really, is it any dumber than Ant-Man? I rest my case. 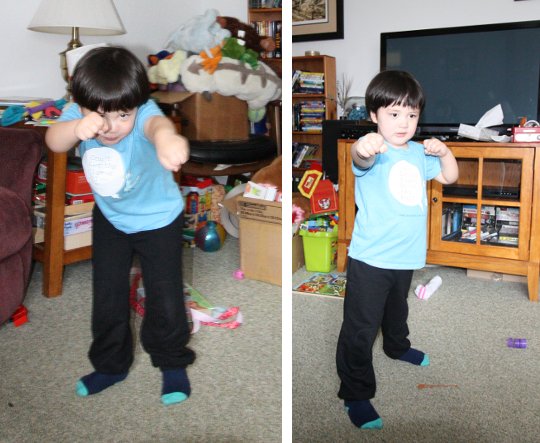 Exactly three years ago today, The Pip arrived, in a manner that will allow him to kill Macbeth should that become necessary. This is the age where kids first become aware of the concept of birthdays, so he's just a tiny bit excited about this. He's a fast-developing Little Dude, chattering more…

In comments to the Sagan post, Niall asked about how I spend my time. This is about to change, as today is the last day of my class for the fall term, then we have an extended break, but it's probably interesting in a life-in-academia way to put up my schedule at the moment: Monday, Wednesday,…

I feel a little bad sometimes that I don't really give the Pip his due on the blog. Back when SteelyKid was a toddler and pre-schooler, I had a lot more free time in which to transcribe the various conversations I had with her into super-cute blog posts. The Pip is in the same sort of stage now,…

Jake and the Overly-Analytical Parents

SteelyKid has recently become obsessed with the Disney Junior show Jake and the Never Land Pirates, demanding to watch it all the time. Thanks to her two recent bouts with this year's stomach bug, I've had to watch, or at least listen to her watching in the next room, every episode that Time Warner…

I think a good argument could be made that D.C. Comics is more in need of help.

True, but Marvel Studios is more likely to have the good sense to hire him...