What a Difference a Year Makes

Back in October or so, SteelyKid's first-grade class started a weekly journaling exercise. Every Monday, we were supposed to send in a sheet with some prompts on it-- words about something interesting that happened over the weekend, and the kids started the day writing about... whatever it was.

I was a little dubious about having six-year-olds write journal entries, but, you know, I'm happy to defer to professional teachers, so we did it. Most weeks. some days we forgot, or SteelyKid would get all muley and refuse to help think of a topic and words.

Yesterday was the end-of-year party for her class, and one of the big pile of things Kate brought home was the journal. And it's pretty remarkable to see how it progressed. Here's the (undated) first entry, keeping the spelling as is:

(This is accompanied by a picture of SteelyKid kicking a soccer ball at sunset...)

Here's one of the last entries, dated April 13:

On Sunday I was jumping on the couch, but I fell, "Ou!" I scraped my back! First, I stacked the five pilloes in a big pile with three big pilloes. Next, I tied the five pilloes up with a purple jump rope. Then, I jumped and jumped. Last, I poused into the pile of pilloes, "Weeeeee!!!!!!" I had a lot of fun but, not scraping my back.

So, um, yeah. Good work on the journaling, first-grade class...

They also produced a number of books through the course of the year, and we got copies of draft ideas for several of these. Their last assignment was Opinion Writing, which produced the following draft for "No more homework"

My Opinion (Topic Sentence): My Opinion is we do not need homework. Here are my reasons why...

Reasons 1. Homework is boring because it takes for ever to finish.

2. I think we do not need home work because it is hard.

3. We are smart a naf because the teachers teach us a lot.

(This was not her final choice of topic, but I like it because it's at least as good as a lot of anti-Common Core stuff you'll find reshared on social media. Her final opinion topic (still on display in the class) is "Why Minecraft Is Better Than Pokemon" and expounds on that topic at great length. Also, lest you read troubling anti-intellectualism into her argument against homework, the third draft in her folder was an impassioned argument that the class should get to spend more time in the school library.)

As you might've guessed, I'm extremely proud of SteelyKid and her education. And very impressed with her teachers and the ambitious projects they pull off with a bunch of six-year-olds. Because, really, this stuff is amazing. 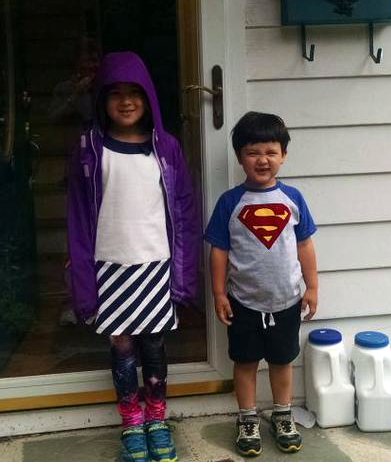 SteelyKid dressed in "fancy clothes" (a dress over tights with a picture of stars and nebulae on them), and The Pip in his new Superman shirt.
Tags
education
personal
Steelykid!