"Always try to keep a patch of sky above your life." -Marcel Proust

Welcome to another Messier Monday, where each week we take an in-depth look at one of the 110 deep sky objects that make up the Messier Catalogue! Messier was not the first person to try and make an accurate, large catalog of deep sky objects, but he was the first to successfully do so: most of his objects both actually exist, are deep sky objects, and had their positions recorded correctly. 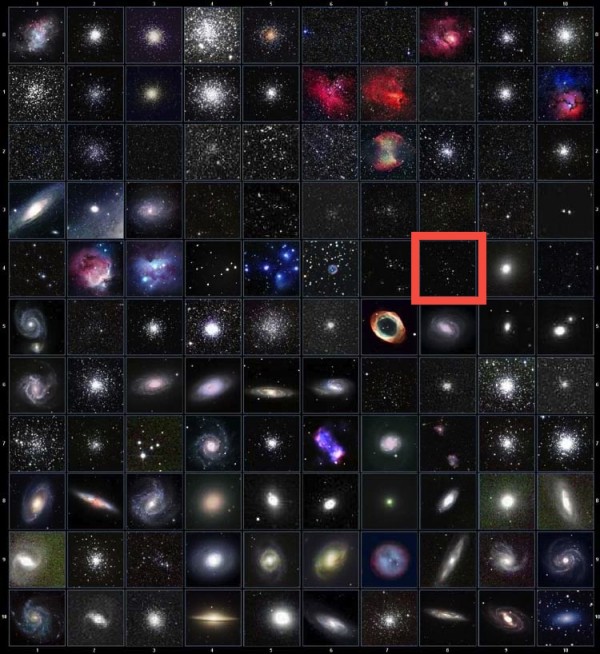 Most, that is, but not all. Today, we'll be looking at the open star cluster Messier 48, one of the objects that does exist, is an interesting deep sky object, but that he incorrectly recorded the position of. Here on Earth, we describe a position by longitude and latitude; in astronomy, their counterparts are right ascension and declination. And while Messier successfully recorded the right ascension, his declination was off by five degrees.

Here's how you can find it for yourself. 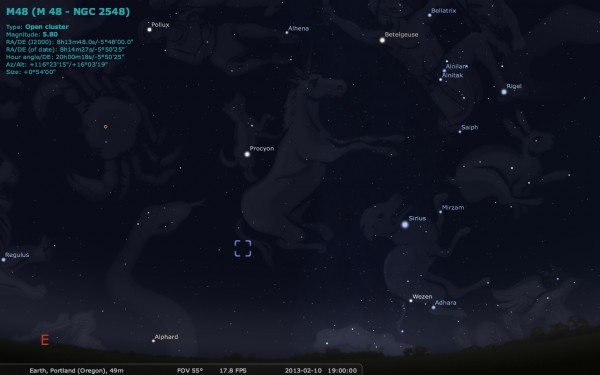 Shortly after sunset tonight, you'll be able to find Orion high in the sky, with Sirius and Procyon trailing behind towards the east. A little farther away, to the left of the box above, is what appears to be the naked-eye star 30-Monocerotis (also known as C Hydrae), in the tail of the unicorn. But if you look closer, you'll find it's actually three stars in a line, close together. And if you take Messier's 1771 description of this object:

Cluster of very small [faint] stars, without nebulosity; this cluster is at a short distance from the three stars that form the beginning of the Unicorn's tail.

You can't miss it, even through a pair of binoculars or -- on a very clear, dark night -- with your naked eye. 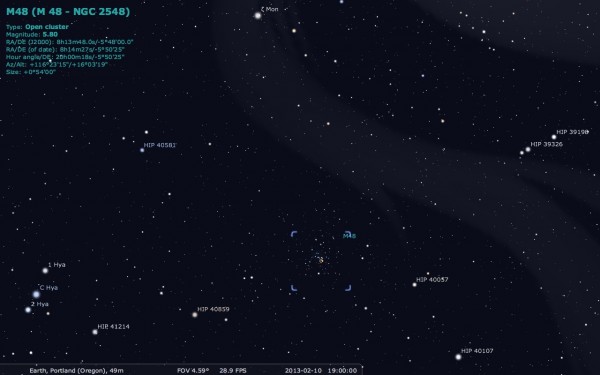 There's a collection of stars clustered tightly together: that's Messier 48. This cluster was independently rediscovered 12 years later by Caroline Herschel, and has been well-known ever since, although Messier 48 has never acquired a nickname. But it provides us with an important example of a still young, but aging, star cluster. 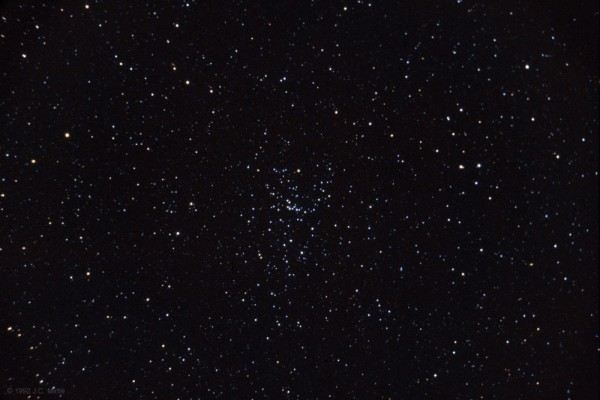 Image credit: John Mirtle of http://www.astrofoto.ca/john/, from way back in 1992.

When stars first form in a region of space, they typically contain anywhere from a few hundred to a few thousand new stars, and they appear roughly evenly distributed (by mass) across the seven major spectral types.

The O-stars burn through their fuel the fastest, dying the most quickly. After that, the bright B-stars run out of fuel, and that's the end of stars that will die in a type II supernova. Over time, the biggest, brightest stars continue to burn out, becoming red giants and dying in planetary nebulae.

Messier 48's brightest main-sequence star is of spectral class A2, which means this cluster is about 300 million years old. As you can tell by looking at it, it's already burned all of its nebulous dust off. 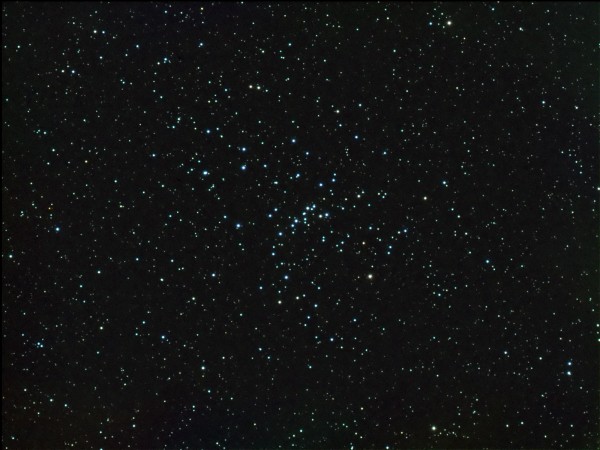 What you might not be able to tell -- not from the images I've shown you so far -- is the great diversity of color in this star cluster. As you'd expect, the brightest, most massive, bluest stars dominate the light coming from this cluster that's located about 1500 light years away. 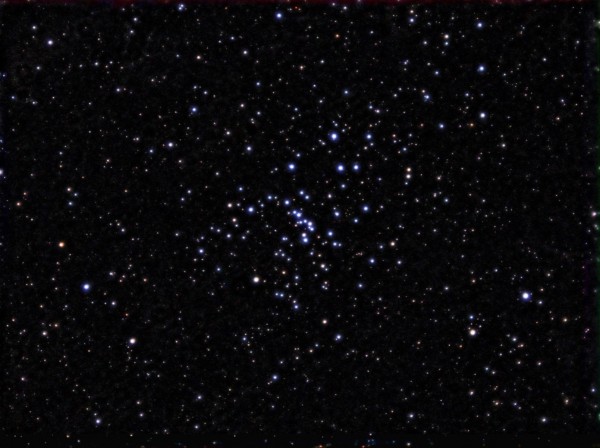 There are at least 50 stars visible through a very good pair of binoculars on a moonless night, and at least 80 stars (and probably many hundreds more, if you include the ones too dim to be seen at this distance) are visible through a better telescope. But what might not be obvious here is that there are quite a number of big, bright red stars as well. 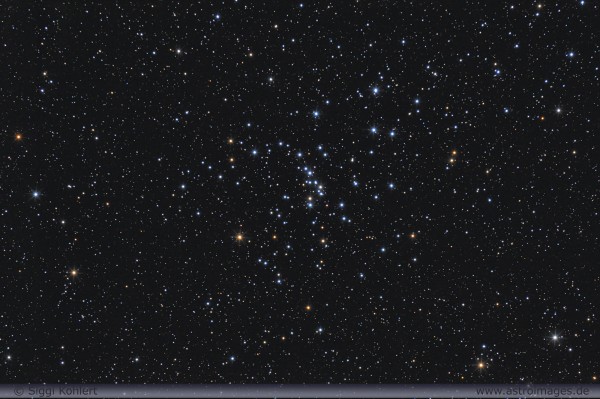 Red giants (and three yellow giants) are stars that were just slightly more massive than the bright blue ones still shining, and these have entered a later, helium-burning phase of their life cycle. Someday soon (astronomically speaking), these stars will blow off their outermost layers in a planetary nebula, while the inner core contracts down to a white dwarf.

All the remaining stars visible at this distance will eventually do this, but only the bright red ones are getting close. 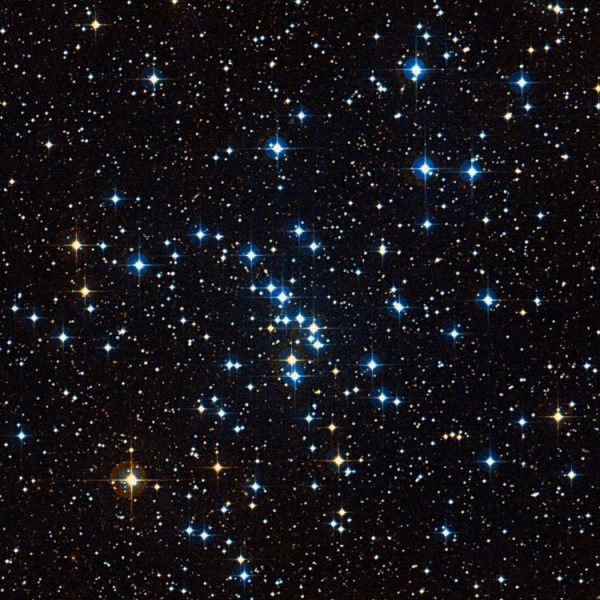 The brightest one (here at lower-left) might be getting quite close, but don't hold your breath: the processes that create a planetary nebula are not catastrophic, and take upwards of hundreds of thousands of years to complete.

If you take an image of this cluster that's both wide-field (considerably over a degree, or the equivalent of 22 light-years across at this distance) and deep, you'll find that there are some 165 identifiable stars in this cluster. 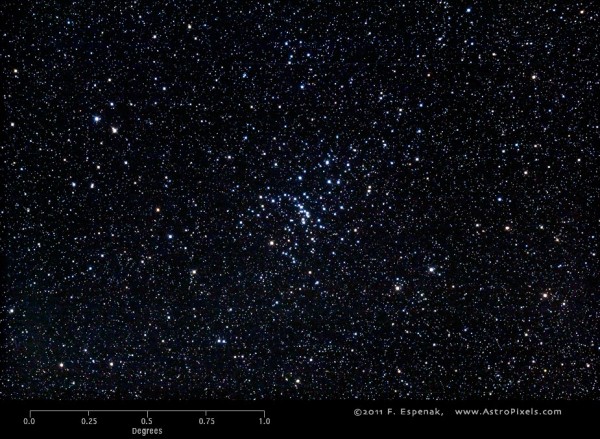 Unfortunately, none of NASA's great observatories or giant telescopes have imaged this relatively close-to-home deep sky object. But I was able to track down a fantastic image of the core of this cluster, courtesy of the Sloan Digital Sky Survey. 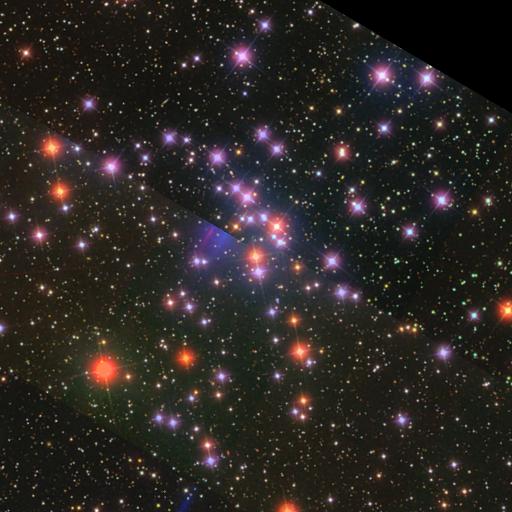 The reds and blues here are so striking up against one another, I was tempted to call this the election map cluster! But I'm not the arbiter of names; so plain old Messier 48 it is. Messier wasn't perfect, but his catalogue is the first very good one of our sky, and continues to be both useful and gloriously gorgeous to this very day!

Including today’s entry, we’ve taken a look at the following Messier objects:

Come back next week for another Messier Monday, where we’ll look deep into the night sky, and admire the wonders that fill our galaxy, and beyond! With seventeen down, we've got plenty more to go; let me know which one you'd like to see featured next!

I have to admit that as a backyard astronomer I was not into open clusters. Your descriptions of some of the science behind the images has certainly made them more interesting. It might be nice to see the Messier open clusters arranged by age from young to old....

Nice.
The SDSS photograph is spectacular.
It forced me to reread the post, to understand the difference between the red and blue stars. Yes, I'm a slow learner; but if I hear the same thing enough times I'll remember.

I guess I never realized that open clusters have a relatively short life span.

"Estimated cluster half lives, after which half the original cluster members will have been lost, range from 150–800 million years." wikipedia

But what I can't find, maybe because it is so obvious, is what happens to the stars of an open cluster after the stars have become "gravitationally unbound"?

I assume that the stars then just become part of a nearby globular clusters or galaxy. Is this generally what happens?

And then my next question. Do most stars form in open clusters? I mean I know they form in gas clouds. And I know that spiral arms of galaxies are good breeding grounds. But I don't know if the gas clouds are mostly in the spiral arms and if then the open clusters of young stars mostly form there.

Any clarification will be appreciated.

"what happens to the stars of an open cluster after the stars have become “gravitationally unbound”?"

The stop being in an open cluster. They remain in the spiral arm, but are no longer a cluster of gravitationally bound stars but all single or multiple star systems like ours (or Proxima Centauri, or Sirius, or...).

"Do most stars form in open clusters?"

Pretty much. Any single gas cloud will be big enough to create thousands of stars.

The arms of a spiral are phantoms, caused by there being a rarifaction (between spiral arms) and compaction (leading the spiral arms) of gas in the disc and the stars are born (and are brightest on average) where the gas is dense enough to form star systems when perturbed, and only the dimmer ones survive long enough to remain burning when the spiral arm has "passed", making the trailing edge on average dimmer than the leading edge.

"The arms of a spiral are phantoms"

Next on Ghost Hunters: Are there ghosts hiding... in space?!

But like many words, the word phantom had previous meaning and was suborned into use to mean something paranormal.

phantom (n.)
c.1300, fantum "illusion, unreality," from Old French fantosme (12c.), from Vulgar Latin *fantauma, from Latin phantasma "an apparition" (see phantasm). The ph- was restored in English late 16c. (see ph). Meaning "specter, spirit, ghost" is attested from late 14c.; that of "something having the form, but not the substance, of a real thing" is from 1707. As an adjective from early 15c.

Sorry, the existence of a supernatural connotation of the word is enough for a Ghost Hunter like me. It's not like what is essentially a pun makes for flimsier reasoning than any of the rest of it.