Last weekend was our APS-funded outreach workshop The Schrödinger Sessions: Science for Science Fiction, held at the Joint Quantum Institute at the University of Maryland. The workshop offered a three-day "crash course" on quantum physics to 17 science fiction writers from a variety of media-- we had novelists, short-story writers, screenwriters, and at least one poet. The goal was to provide a basic grounding in quantum physics and a look at current research in hopes of informing and inspiring new stories that will, in turn, inspire the audience for those stories to look more deeply into the science.

While this involved the usual complement of scrambling around with the planning-- including some locked doors, a canceled tour, and frantic searching for demo equipment-- the workshop came off wonderfully. The speakers were uniformly excellent the writers were actively engaged, and everybody got along swimmingly. One or two demos didn't quite work as intended, but those were handled smoothly enough that I doubt anybody noticed.

Speakers were a mix of faculty from Maryland and JQI (plus me; I split the introductory material with Steve Rolston) and JQI post-docs, and we tried to cover a wide range of topics from the basic theory behind quantum physics to the concrete applications of the technology used to study the cool phenomena. Everybody did a great job, but I was especially impressed by Raman Sundrum, who did a very informal presentation, fielding questions and speaking off the cuff about a variety of theories beyond the Standard Model of particle physics. His presentation spilled over into the lunch hour, and if we hadn't cut him off at the start of the final talk, they might still be at it.

As I said, the talks were excellent across the board. This was in no small part due to the overwhelmingly positive response from folks at Maryland-- my fellow organizers say they've never had that quick an affirmative reply to any request for volunteers before. This is a nice counter to two common myths about science: first, that scientists are poor communicators, and second, that scientists only grudgingly take part in communicating their work more broadly.

(Even though I already knew the basic physics being discussed, I found the talks really useful for illuminating new-to-me ways of getting some of these ideas across. I fully intend to steal a bunch of the metaphors and explanations people used, particularly Trey Porto's Plinko-based explanation of quantum statistics, Andrew Childs's introduction of Deutsch's algorithm with an interferometer, and Mohammad Hafezi's magic-box analogy for quantum measurement.)

Thanks are, of course, due to all our excellent speakers: Mohammad Hafezi, Paul Hess, Elizabeth Goldschmidt, Chris Monroe, Andrew Childs, Steve Eckel, Jim Gates, Jimmy Williams, Raman Sundrum, and Allen Stairs. I'm also very grateful to Steve Rolston for going along with this crazy idea I had. Most of all, though, thanks to Emily Edwards of JQI, who did an amazing job dealing with all the logistics of housing, parking, food, transportation, A/V and demo gear, and all the rest. It very literally could not have happened without her.

We're going to let the dust settle a bit before deciding when we'll do this again, but things went well enough that I'm fairly certain it's "when" not "if." So, watch this space (and several others) for news of the next time.

And here are a few photos, because I have a fancy camera and I'm not afraid to use it: 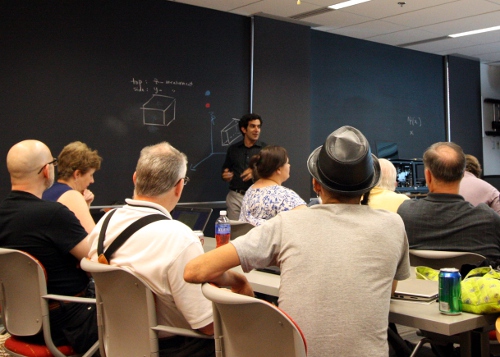 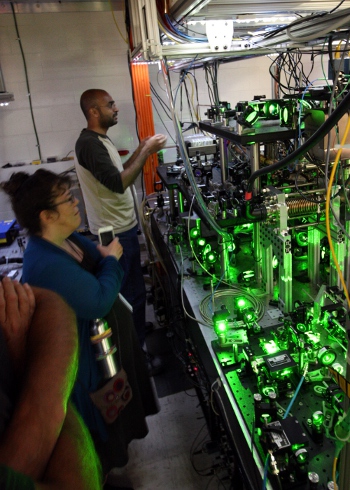 Tour of a laser cooling lab at the Schrodinger Sessions. 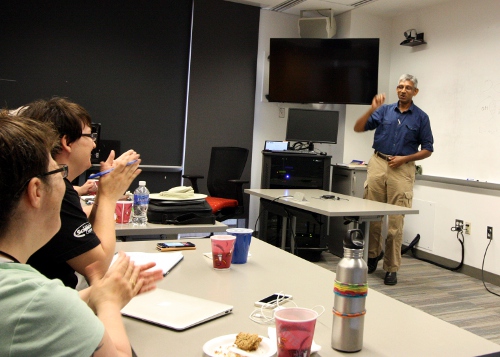 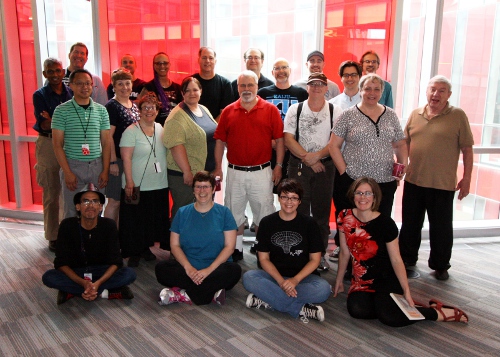 Dear Prof Orzel,
I recently came across your article in "Forbes" titled, "Six things everyone should know about quantum physics". In it you made the following amazing statement: "So, if somebody comes up to you with a "quantum" idea that seems too good to be true - free energy, mystical healing powers, impossible space drives - it almost certainly is".
I was surprised at this statement, coming from a theoretical physicist.
Is it possible for me to get in touch with you somehow, e-mail, etc. I have some ideas bothering me for some time now and I am curious to know if they could have even the remotest scientific explanation.
I am not a physicist. I am a medical practitioner, but I love physics and astronomy. As a matter of fact, I consider myself an amateur astronomer. Hoping on your kind reply.
Thank you for your attention
Adimchi Onyenadum MD.
Medical Oncologist.

I love that picture of the laser cooling lab.

Does any science fiction writer ever struggle to convince an editor or readers that something that exotic looking, described in prose, is a plausible fantasy future (let alone the present)?

Wow,
A sci-fi writer is going to put into pros basic, simplistic calculus, so that I can understand it after two or more decades of just reading it. I will begin to get an Einstein theory of relativity understanding of basic calculus. For me that is an accomplishment. It is like explaining 'light year' from a Star Trek point of view. You will teach, enlighten, educate, and entertain at the same time. Is that possible???

Can this be the beginning of a new age of understanding. Where as, all people regardless of background, will not only recognize Einstein theory of relativity, but understand what it means.
Developing present day 'open' computer games that will notify the game developer of a major accomplishment for medical research, architecture styles, civil planning, new technologies.
Can we transform the desolate desert areas of the world, increase food production, or even improve the quality of life for the world population through a computer game.
Or, is this just 'day dreaming?'