Took the camera along this afternoon when I took Emmy for a walk (Kate and I are going to see The Martian tonight, so Emmy got an early dinner and stroll), and took pictures of a bunch of random stuff in a little park near our house. Including these two pictures pasted together into one: 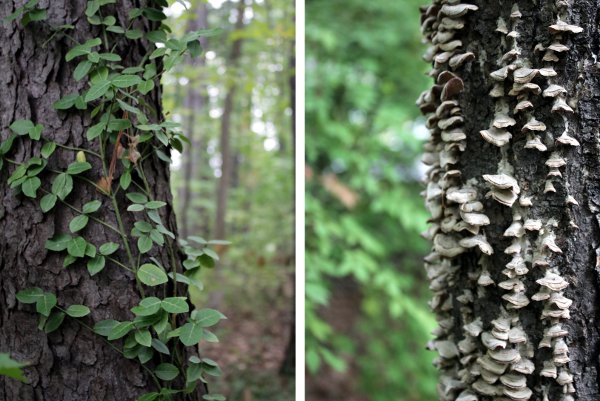 Two tree trunks in a park near Chateau Steelypips.

These two trees aren't right next to each other, but I didn't do much more than turn 90 degrees to get from one to the other. If I were attempting to pass myself off as an artiste, I would explain that this juxtaposition here is a political allegory: the tree on the right is encrusted with nasty old fungus, the tree on the left is ringed with a climbing green vine, but they're both being killed by the stuff attached to them.

Really, though, I just liked the color and texture contrasts of these, which is why I took the two individual shots. And when I had them up side-by-side to try to choose one for the photo of the day, they looked good together, so I said "What the hell, I'll combine them in GIMP."

I'm back after the traditional family holiday and a less traditional trip to Charleston, SC for the Renaissance Weekend meeting. Which means things will start to return to what passes for normal around here, and that means it's time to get caught up on photo-a-day pictures... What with one thing…

Another long photo-a-day gap, because the last week was crazy in a bunch of ways. The weather has slewed wildly between winter and spring; Kate had to go to The City to argue a case leaving me solo-parenting the sillyheads; and I've been fighting the onset of a rotten cold. That last has involved a…

As promised in the last catch-up post, a set of pictures less devoted to cute-kid shots. 213/366: Zone Defense The superhero-themed "zones" of our house, as defined by the Pip. The Pip has been making one of his preschool teachers draw superheroes for him. At some point, he cut these out with…
Advertisment