Having a slow morning here in Sacramento, because yesterday started before 4am and ended after 1am, according to my internal clock. This provided the opportunity to take some nicer pictures than just the obligatory hotel-window shot, so I went for a walk on the bike path by the American River. Where I saw Fire Sheep: 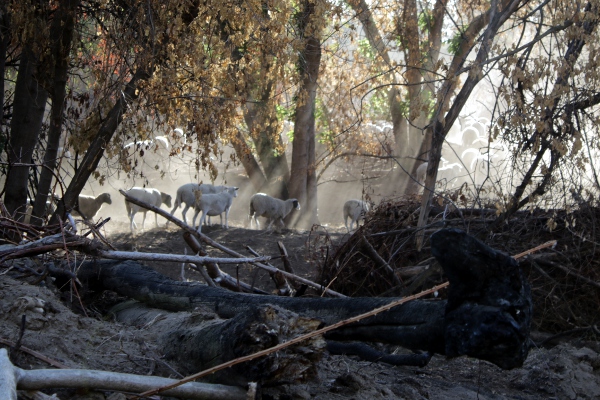 OK, technically, according to the signs they had up, this is an "animal grazing fire fuel reduction" program, but I think "fire sheep" sounds cooler. There was a pretty sizable herd of sheep wandering around the side of the path, munching on the undergrowth. This particular shot was at a point where a whole bunch of them had decided to move up over a little hill, kicking up some dust that made for those cool visible sunbeams. You can also see why they're needed, thanks to the burned tree trunk in the foreground.

I'm heading over to the CSU campus in a bit, and giving a colloquium talk this afternoon. I doubt I'm likely to get a cooler shot than the fire sheep, though, so I'll just post this now, and not have to worry about it later...

But lest the Sacramento tourist board decide to hunt me down for mocking their fair city, I'll throw in a bonus pretty photo of the American River: 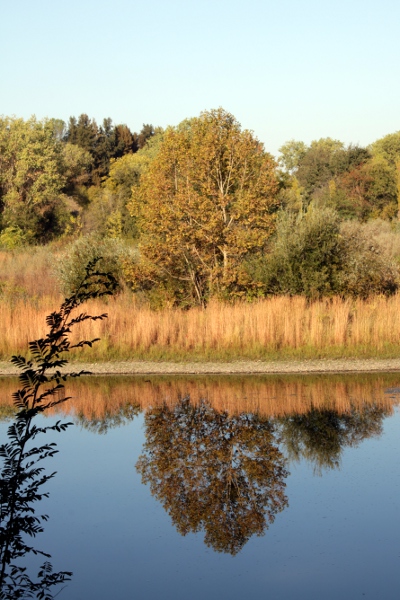 Tree reflected in the water of the American River.

The Jesusita Fire in Santa Barbara has broken out and spread far west and south, situation is looking very serious, there will be a lot of loss tonight, evacuation orders extend to Goleta, refugees are moving to UCSB, and it may not be done yet. It could be worse than the Tea Fire. Well, I was…

I'm leaving today for the AAAS meeting in DC, where I'll be through the weekend. The AAAS works much differently than the physics conferences I'm used to, most notably requiring speakers to upload their presentation several days ahead of time. This means that my usual night-before-a-talk process of…

When we were in DC back in July, SteelyKid purchased a toy Newton's cradle. And I already owned a 1000fps video camera, so it was inevitable that the one would end up in front of the other... I spent a while this afternoon making high-speed video of the toy clicking back and forth, but didn't have…

this is an “animal grazing fire fuel reduction” program

Or in other words, all-terrain lawnmowers. Sheep are sometimes used thus in Vermont, where fire danger is usually not as high as in California.