SteelyKid's Elite Team taekwondo practice on Tuesday night was a "game night" because they had a belt test last week. The kids opted to play capture-the-flag against the parents, which ended up a tie (the adults won the first two games, the kids the second two), but the adult victories came at a price: 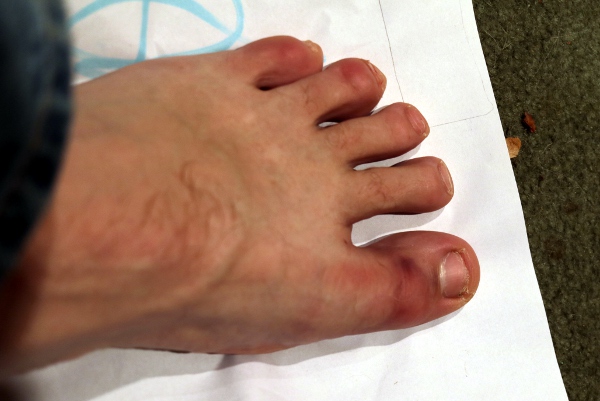 This actually looks worse than it is. I mean, it does hurt, but the pain from my toe is minor compared to the aggravation of my plantar fasciitis from running around on thin foam mats with no shoes.

(Of course, neither of these kept me from playing basketball today at lunchtime, because I'm a lunatic that way... The plantar fasciitis at least gets a little better once I run around a bit and it loosens up; in the morning, or after a long idle stretch, it's like a hot knife in my shoe, though.)

One of the other parents messed her foot up more seriously than I did, and was really limping at the end of the games. But, you know, the kind of competitiveness needed for kids to join the elite sparring team has at least some genetic component to it...