Another day with a staged-for-talk-prep photo: 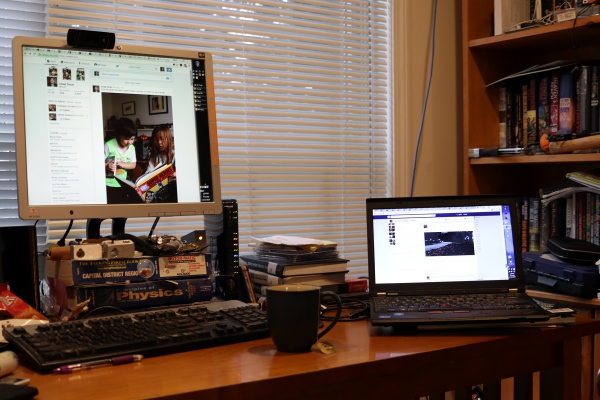 My desk, with social media on both computers.

I needed a picture of social-media apps on computer screens for an upcoming talk, so I took one. After first tweeting a cute-kid photo:

Cute-kid photo because I want to take a picture of Twitter to use in a talk. pic.twitter.com/QIYHTda0vL

Yeah, it's shameless. But look at them, they're adorable! And the reminder of their adorableness was really needed today, because it's been an incredibly frustrating week, kid-wise.

I should note that I do not actually double-fist social media websites like this, but it let me get both Twitter and Facebook into the photo, which was the real point.

Because I know there are still a few people who come here for the cute-kid pictures, I give you the official SteelyKid portrait for the 2013-14 academic year. This is actually a photo of a photo, because that's the easiest way to convert the print they sent us to a digital format, and also because…

Friday Fun: The Top 10 Types of Douchebags in Tech and How NOT to be one

This one's pretty funny, but in a painful way. I'm sure this one rings true for a lot of people out there. I like Number 8: 8.) Self-Entitled Social-Media HotShots Who You Are: Your license plate reads "SCLEXPT". You spend all day teaching computer illiterate people how to create a facebook pages…

Having just returned from a long trip where I gave three talks, one of the first things I saw when I started following social media closely again was this post on how to do better presentations. The advice is the usual stuff-- more images, less text, don't read your slides, and for God's sake,…

Blogging Doesn't Have to Be a Career

Last week, I gave my evangelical talk about science blogging to the Physics department at Wright State, and also a lot of education students who came to the talk (which made a nice change in the sort of questions I got). It's basically this talk that I gave at Cornell a couple of years ago, with a…
Advertisment