So, today, we engaged in the traditional Black Friday activity of, um, going to the park and chasing birds: 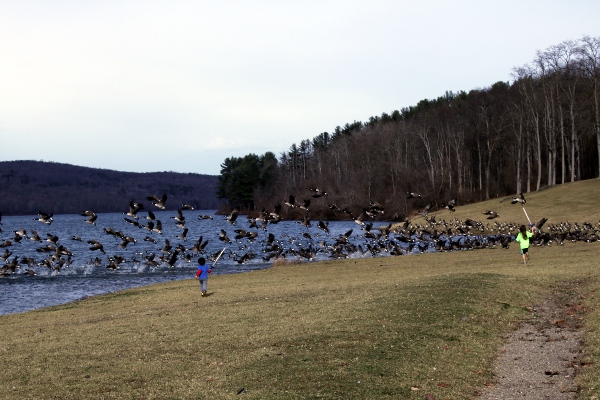 SteelyKid and The Pip scaring geese with their swords at the park on the day after Thanksgiving.

It was an unbelievably warm day for late November-- if you look closely, you can see that SteelyKid is wearing shorts and a T-shirt-- so we couldn't very well sit inside. So we went across to the other side of Whitney Point Lake to Dorchester Park to let the kids run around. We hiked up the stream, played on the playground, and chased the big flocks of Canada geese into the lake.

This did serve the intended purpose of tiring the kids out. Also, tiring me out, because I took an hour-and-a-half nap after lunch. But hey, it's Thanksgiving...