One of my Christmas gifts this year was an external flash unit for my DSLR, replacing one that broke a while back. Given that the camera has a built-in flash, you might wonder why I need this extra bulky gadget, so to answer that question, here's a composite of five pictures I took today: 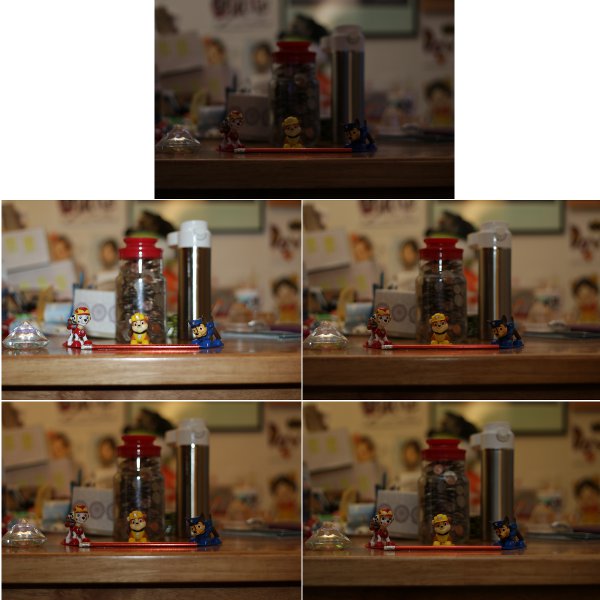 I put the camera in full manual mode, and set it to be a little underexposed when photographing The Pip's PAW Patrol figures and other crap on our dining room table. That's the top center image.

The other four shots use the external flash unit in various modes. The pair on the left have the flash pointed directly forward, basically like the built-in flash unit. The top one is the regular flash, and you can see that it looks a little harsh, with a big glare spot in the glass behind the toys, and the central dog a little overexposed. The lower one is still straight ahead, but with the diffuser in place (a piece of textured plastic looking a little like a bike reflector that breaks up the outgoing light).

On the right are two images with the indirect flash. The top has the flash tipped up at a 45 degree angle, and the bottom has it straight up. These bounce the light off the ceiling, and as you can see, this gives a less harsh illumination. There's still a bit of glare on the glass in the 45-degree shot, but that's almost completely gone in the straight-up one.

The indirect flash images look a whole lot nicer to me than the basic direct flash (the diffuser one looks pretty similar to the 45-degree shot, so would also be okay). This also almost completely avoids the red-eye effect you get with a direct flash-- you can sorta-kinda fix that in software, but as a general rule the less work you need to do in GIMP, the better.

(The optics here is basically an inverse-square sort of thing: with the direct flash, it's acting sort of like a point source, so the light is much more intense on objects close to the lens than those farther away. Bouncing the light off the ceiling first means that there isn't too much difference in distance between the nearest and farthest objects in the image, so everything is lit about the same. You also get less glare and red-eye because you don't have light coming straight from the flash and reflecting straight back into the camera.)

And that's why I like having the external flash unit. You can get some of the same effect by taping a white piece of paper in front of the built-in flash, but that's inelegant and not quite as flexible (there are other tricks you can pull with the external unit, too). Which is why it was a great Christmas gift...