One of the things about being a physicist that makes it tough to have any sensible work-life balance is that I'm constantly seeing little things and thinking "Oooh! Physics!" then getting distracted from what I'm actually supposed to be doing. Take, for example, our bathroom sink.

I have noticed, from time to time, a weird effect where the stream of water coming out of the faucet, which normally is fairly straight, will spread out when the water level in the container below gets close to the faucet. This turns out to be damnably difficult to replicate, though, and I've spent more time than I care to admit screwing around with the sink trying to get it right. I finally got it yesterday, though, as you can see in this video (which also has a clip from a later failed attempt):

And here's a couple of screencaps (also visible as the "featured image" above if you're not reading via RSS) showing what I'm talking about: 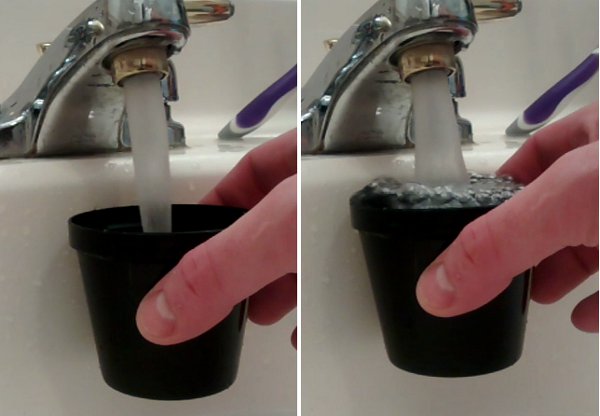 Two screencaps from the video showing the way the stream from the faucet spreads when water level of the container gets close to the nozzle.

The one semi-consistent thing I've noticed is that this seems to only happen with hot water; I've never gotten it to work with cold (the second clip is cold water, done deliberately to show that it's not a consistent thing). The flow rates in the two clips probably aren't identical, but that's a hard thing to match with the handles on our sink.

Anyway, I have absolutely no idea why this happens; I'm mostly just glad to have evidence that I didn't imagine it. So I'm going to throw it out there and see if any of my wise and worldly readers can explain what the hell is going on.

It appears that your faucet aerator is one of those which doesn't emit water from the center, so that there can be a stable volume of not-mixed-with-water air inside the upper part of the stream. Notice how the uninterrupted stream has a sort of bulging shape to it which collapses a few inches down.

I haven't seen the effect you're describing (and I don't currently have any of that type of aerator to test with), but I wonder if it has something to do with the hot water heating that air (which is presumably replaced by cold air drawn in at the aerator).

In the second case, the stream hits the surface sooner and won't build up as much speed so I think it is Reynolds number or something. A test would be to lower the filled cup to match the first surface height or vice versa. Clear glass would help see within the cup.

The transition between laminar and turbulent flow depends on geometry, so I wouldn't be surprised if there was a temperature effect as well. My guess is that the hot water case crosses the boundary into turbulent flow while the cold water case does not. And as Kevin notes above, it could be the air inside the water column that is crossing into the turbulent regime.

I've seen similar things filling a bucket of water with a hose with a variable jet nozzle. At some hose settings there are two steady state solutions to the jet shape (compact or spread out). Also there is a distance from nozzle to water surface where the transition occurs, but this distance isn't the same if you are closing or opening the gap. In fact you can start with the open jet, stick it into the bucket, and pull it out with a compact jet even when its no longer hitting the bucket. To get it to spread again, requires changing the nozzle setting significantly.

Obviously there is information flowing against the current, which I guess shouldn't be surprising as the sound speed in water is much faster than water jet velocity. But the fact that there are two stable configurations is interesting.

Also a bit less mysterious is the hydraulic jump. Point the jet at a flat surface, near the center the flow is fast but thin, then some distance out there is a sort of shock front, beyond which the flow is thick and slow, and the transition is nearly wall of water like.

Simple, slightly higher velocities and hot water draw in more air and the air is cooler than the water. The air expands as it heats and this combination causes the stream to bloom.

At slower flows and with colder water it draws in less air and the air is cooled and contracts which means the stream narrows.

I think Art has it. You're most likely far in the turbulent regime the whole time, in terms of Reynolds number, for both the air and the water (though two-phase flow is complicated). Regarding Omega Centauri's comment, see here.

Art, Douglas -- What explains the original observation, namely the relationship between the stream configuration and the faucet - water level distance?

In the case when the water stream exhibits this widening phenomenon I believe there seems to be an air bubble blocked inside the stream. Upon close inspection, the center of the stream is more transparent than the sides, which indicates that the stream is "empty" inside (filled with air). When the phenomenon stops happening, the stream seems to be fully opaque.

As for "closer or further away," the air bubbles trapped in the stream of water escape as a function of the length of the stream. When the stream is shorter, less air escapes, so when that column of aerated water encounters a closer surface, it tends to expand.

And yeah, I also tend to see physics in everyday events. For example a small object that falls off a desk will always land in the location that requires the greatest expenditure of calories to retrieve, thereby maximizing thermodynamic entropy;-)

BTW my item in paragraph 1 of (9) is testable: find a small flat hard surface that can be placed under the water stream. I would expect that the water stream will expand as the object gets closer to the faucet, up to some point where a different set of dynamics takes over.