Here in the US, we're slowly transitioning to the European system of chip-based credit cards (I got email at work saying that my new card there will actually be chip-and-PIN, wonder of wonders). This is not uniformly distributed yet, though, so about half of the retailers I deal with regularly want the chip, the other half want the old-school swipe. If you guess wrong about a particular store, the terminal will blat loudly and annoyingly at you, so I end up asking cashiers all the time "Are you guys doing the chip thing yet?"

One local store apparently got sick of that, and modified their terminals with Post-It notes: 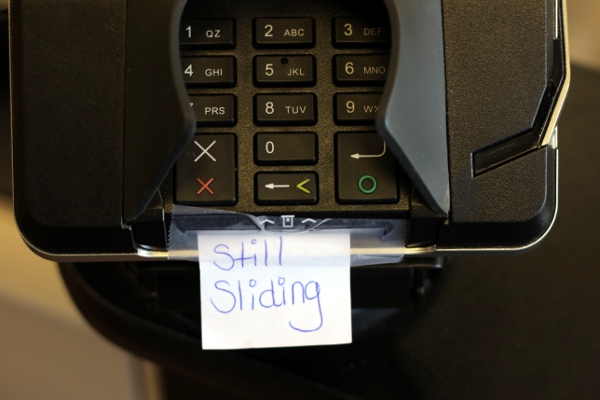 Credit-card terminal at the Niskayuna Co-Op.

(I took this when I brought my camera with me on the walk to the store to pick up a few things-- trying to replace a little of the exercise I'm no longer getting with Emmy gone. The other thing I took a bunch of photos of on the way was old-school rooftop TV antennas. It's a theme!)

(I thought I had queued this to publish yesterday, but I was apparently wrong...)

Wait till you get to try your shiny new chip-and-PIN card at an American EMV terminal that is only programmed to recognize chip-and-signature cards. (Hint: "TRANSACTION CANCELLED" at Wally World). Lotsa fun that cutesy taped signs won't really deal with well.