Another long photo-a-day gap, because the last week was crazy in a bunch of ways. The weather has slewed wildly between winter and spring; Kate had to go to The City to argue a case leaving me solo-parenting the sillyheads; and I've been fighting the onset of a rotten cold. That last has involved a bunch of frantic work in anticipation of not being able to do much for a couple of days at some point, and today that caught up to me and I decided it was an official recovery day. Which gave me time to sort and GIMP the various pictures I took.

We got a bit of an ice storm one day last week, and I spent a little while trying to get good photos of the thin sparkly layer coating plants in the yard as I waited for the kids to be ready to go to day care. This is about the best I managed: 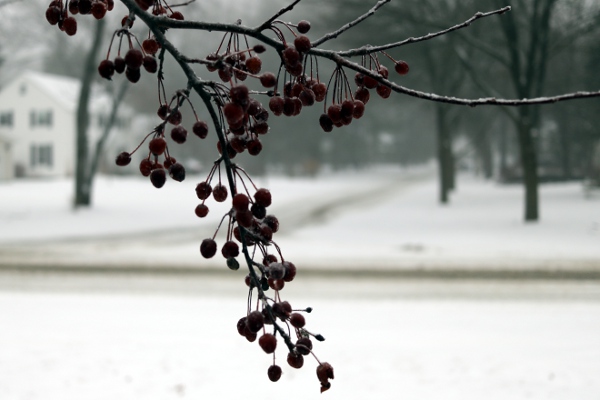 Our ornamental cherry tree in the freezing rain.

Of course, the freezing rain turned to rain-rain, and by the time I needed to go pick the kids up, the yard looked like this: 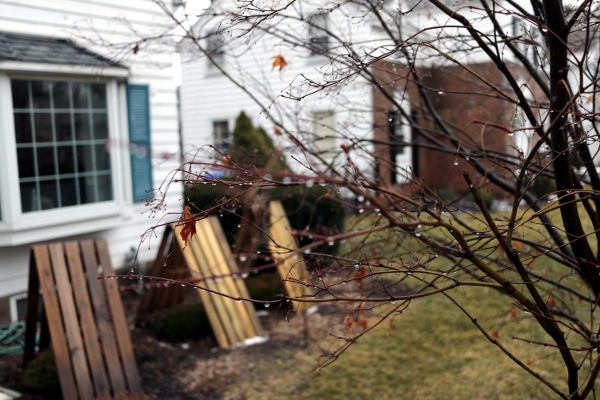 Our soggy yard after the freezing rain warmed up.

Somewhere between the last two pictures, I was at Panera writing (having dropped SteelyKid at taekwondo, which is in the opposite direction from my usual Starbucks), and noticed that the coating of ice on their awning was melting and sliding off, which looked cool: 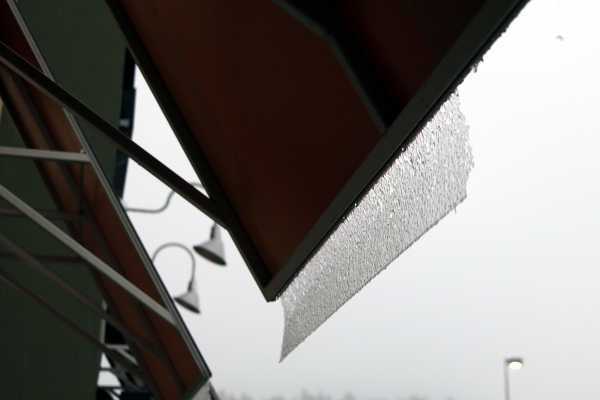 A thin layer of ice in the process of sliding off an awning.

It was really nice for a few days in there, and I went over to campus to get my mail and walk around with the camera. Here's a shot of "the brook that bounds through Union's grounds" cited in the alma mater: 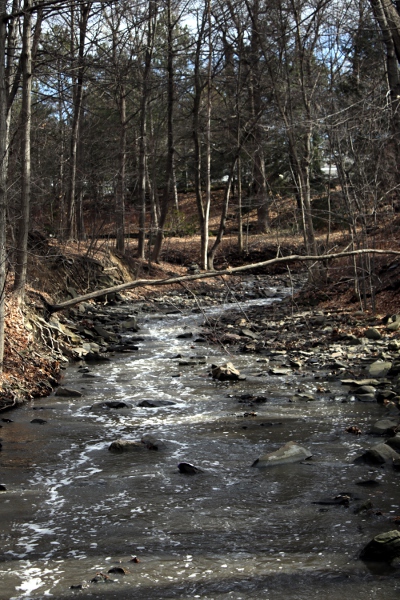 The brook on campus, swollen with snowmelt.

Another shot from the campus photo walk. I wanted to get a shot with the dome of the college observatory next to the dome of the Nott Memorial, but it's tough to get a good angle for that. I had to go all the way over to the Field House, at which point there were a bunch of other interesting structures to include: 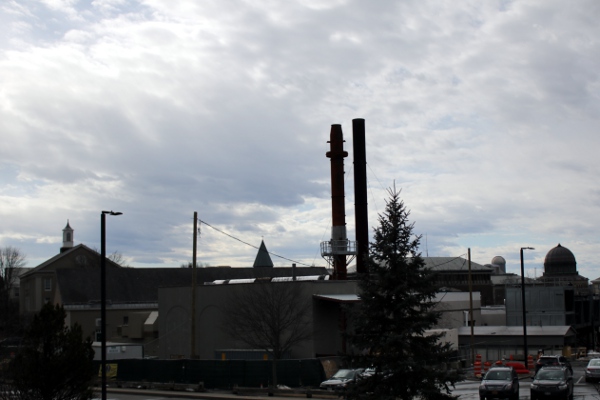 the Union College skyline, as it were.

Left to right, you have Butterfield Hall, the enormous Catholic church across the street from campus, the steam plant, a tree, the observatory dome, and the Nott.

True fact: according to an 1876 ordinance, it's illegal to walk the grounds of Union's campus without taking at least one photo of the Nott Memorial: 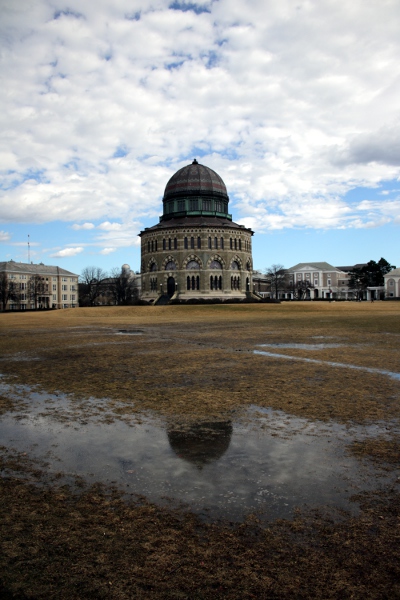 The Nott Memorial, with its own reflection.

(That's not true. It's just very photogenic, and thus hard to resist.)

SteelyKid's school was closed all last week for their winter break, so she and the Pip went to visit my parents for a few days. School re-opened today, so yesterday we drove down to Oneonta, about halfway between there and here, to pick up the kids at a playground, where The Pip showed off his balance: 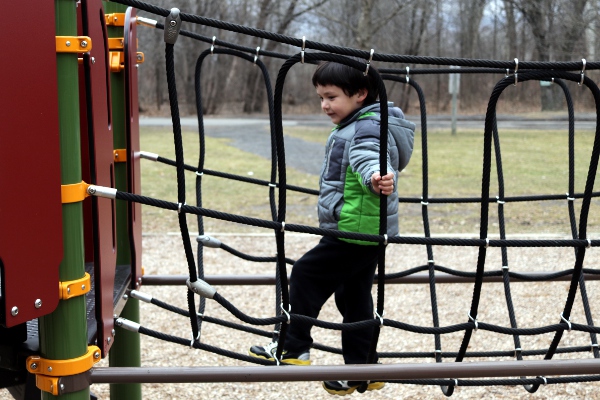 The Pip climbing on a net bridge thing at Neahwa Park in Oneonta.

And to both balance the sibling scale and provide a bonus photo to make up for doing yet another big batch of these, here's SteelyKid flying the remote-controlled helicopter she got: 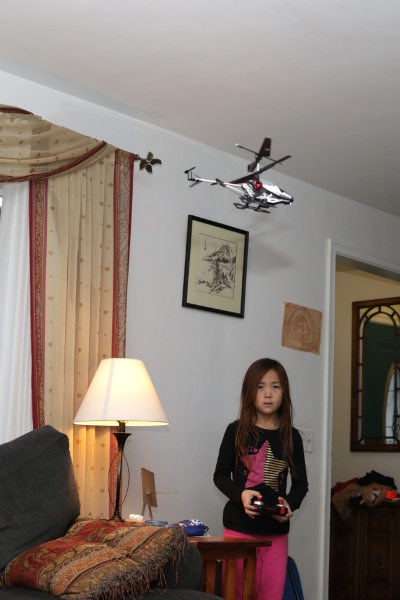 This is Serious Business, as you can tell, especially because the ceilings of Chateau Steelypips are kind of low. We had hoped to try it out in the field house when we stopped to see the last home basketball game of the season, but alas, the baseball team was having an indoor practice. Maybe next weekend.

We're rapidly closing in on the halfway point of this project. I'll have to try to think of something cool to do for that...

That looks like a 7.5-foot ceiling in that room, which is the same height as in my house. So not a lot of margin of error--certainly not enough to risk flying that helicopter between the ceiling and Daddy's head if Daddy is standing up.

7.5 feet is about right. Definitely no room for flying over my head, though she cheerfully overflew The Pip a few times (who was on the floor playing with his PAW Patrol toys, and barely noticed.

Nice photos - we get freezing rain here so often its not something I take a photo of!

How can I send you a simple idea for a post? I have been doing some arithmetic around GW150914 - did you know that 0.018 Watts of gravitational waves went through your body on Sept 14, 2015? For the entire planet its 2.3 Terawatts!. Just calculate the 200 solar masses/second peak power output at a distance of 1.3 billion LY. There are some other neat figures around this event: The energy density around the coalescence zone was about 15 orders of magnitude larger than the maximum allowed E&M fields due to the Schwinger limit. I did all the calculations in the free part of wolfram alpha.com, which I have links for.

I have seen very little on the subject of the immense power and energy density of this event.