I seem to have fallen into a thing where I take pictures more frequently than I edit and post them. I blame the kids-- SteelyKid got sick on Sunday (her third bout with strep in the last five months), and The Pip has decided to get a jump on Daylight Savings by waking up an hour early every day this week. Those both wiped out a lot of time I otherwise would've used for photo processing and blogging.

Anyway, this past Saturday was the big Odyssey of the Mind tournament for SteelyKid and her team. I obviously have a bunch of photos of this; just as obviously they mostly include other people's kids, and I'm not willing to post those. But here's a crowd shot: 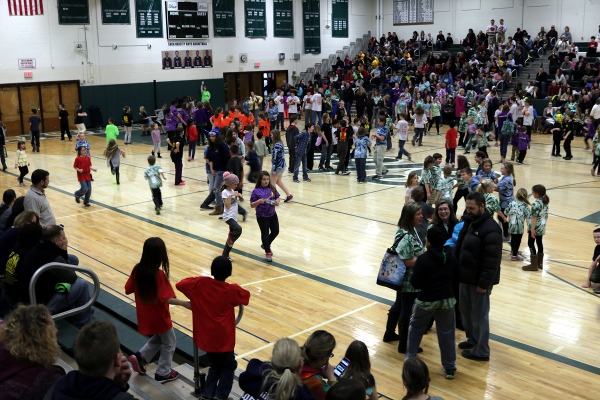 The "dance party" phase of the Odyssey of the Mind tournament last weekend.

That should give you some idea of the scale of the event. This was the "dance party" portion, after all the teams had finished competing but before the final results had been tallied.

The kids did a very nice job with their performance-- they flubbed a line or two of their performance, but nothing too bad, and their 13.5-gram balsa wood structure held 55 pounds before breaking, which was pretty impressive. They ended up finishing third in their division for their problem, which is pretty awesome considering this is the first time their school has ever had a team.

SteelyKid kind of hit a wall toward the end of the day, which was probably the strep starting to bite. But the less said about that, the better...

Thursday was a travel day, the less said about which the better. So, while I do have a couple of cell-phone snaps from the day, I'm just going to ignore it, and give you two better photos from Friday and Saturday. These go nicely together, as you can see in the composite that's the "featured image…

Back in the fall, a note came home with SteelyKid about an organizational meeting for an Odyssey of the Mind team for her elementary school. My father coached this for several years back in the 80's, and one of my sister's teams went to the World championships (held in Cole Field House at the…

Work-Life Juggling, Then and Now

A couple of Mondays ago, I was at work and got the dreaded phone call from day care. "[The Pip]'s got conjunctivitis again. It's really bad, and he needs to go home right away." Admittedly, this isn't the very worst phone call a parent could receive, but it's very much Not Good. Conjunctivitis…

As I've mentioned a few times, SteelyKid is part of an Odyssey of the Mind team through her school, working on a problem to build a structure from balsa wood and glue that will hold as much weight as possible. They've been hard at work the last several weeks, and completed a test structure last…
Advertisment