This one, we'll do sorta-kinda chronologically:

Why is it always bagpipes?

One of the big temporal landmarks of the recent stretch without photo-blogging posts was "Niska-Day," the annual community festival here. This kicks off with a parade, the route for which comes right to the end of our street. Here's one of the first marching elements, the local bagpipe group.

SteelyKid is on this somewhere.

Of course, if you're a kid, the real highlight of Niska-Day is the bit with the carnival rides. SteelyKid is on this, having dragged one of her more timid friends along through sheer force of personality.

A big chunk of the last three weeks was taken up with DAMOP, held in Providence, RI this year. The first day of the meeting was grey and rainy, so I snapped this from inside the convention center.

Nice park near the water in Providence.

The weather got nicer. It was kind of an odd town, though, in that there weren't many places to eat right near the convention center. On the bright side, though, that did force me to get out and walk around, and I ate lunch in this nice little park a couple of times. 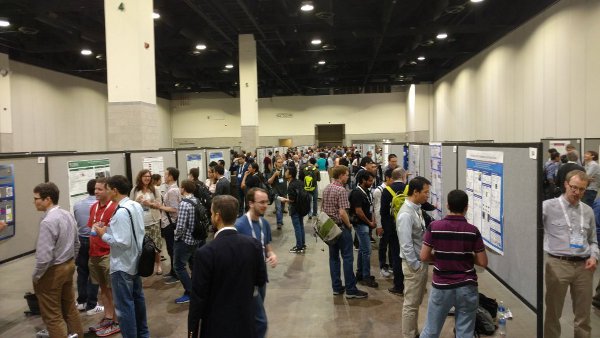 One of the poster sessions at DAMOP.

Of course, there were physicists at DAMOP. Around 1300 of them, in fact.

I didn't eat here, but I did appreciate the attempt to draw in visitors to their fine city.

The American Legion leads off the Memorial Day parade in Whitney Point.

After DAMOP, I took the kids down to my parents' for Memorial Day weekend, giving Kate a little peace and quiet. We went downtown to watch the Memorial Day parade (though we didn't follow it to the cemetery, as the kids aren't fond of loud noises so the gun salute would not have been appreciated).

Cricket at the park during SteelyKid's softball game.

During SteelyKid's softball game this past Saturday, these guys were on another field in the park playing cricket. I'm not sure if it was a pick-up game or some sort of team practice. Doesn't seem to have been an official league game or anything, as they didn't have enough people to be two teams, and it didn't go on for 16 hours. Anyway, I thought it was kind of cool to see, so I took some telephoto shots of it.

One more thematic photo dump coming up after this one...

With a cardboard box for a wicket, definitely a pick-up game!