I've got a big backlog of photo-a-day pictures, but finding time to edit and post them is a major challenge. I've got nearly all the editing done, now, so I'll start putting blocks of stuff up when I have time (generally very early in the morning, as I'm awake before everyone else in Chateau Steelypips). Since we've long since stopped even pretending that these are date-specific, I'll just collect together groups by vague themes:

At some point this summer I started playing around with stitching together bunches of shots to make panoramic photos. Some of this involves playing with open-source software, but like most free things from German Unix geeks, it's not all that easy to figure out how it works, and its automatic mode sometimes does utterly bizarre things. Honestly, the most effective way to make these is to upload a batch of picture to Google Photos, and wait an hour or two in hopes that its auto-panorama routine will notice them and do the job for me. Anyway, here's a bunch of photos stitched together into a smaller number of panoramas (panoramae?):

Downtown Schenectady from the roof of the parking garage on Broadway.

The roof of the parking garage in downtown Schenectady.

I'm currently sentenced to spending two days a week (most weeks, anyway) at the courthouse in downtown Schenectady, serving on a grand jury (pro tip: DON'T DO THIS. If you get summoned for a grand jury, ask to switch to a trial, or move to another state.). The parking is in a garage down the hill from the courthouse, so I took some shots from the roof there. The second one, of the vast empty parking lot, looks to me like it's waiting for ninjas to attack, or maybe the Agents from The Matrix...

(One of these was stitched in Hugin, the other by Google Photos because Hugin utterly choked on it. Guess which is which.)

The rugby field at Union, just below the Nott Memorial.

Panorama from the "porch" outside the Olin Science Center at Union College.

I took the camera over to campus in late August, and was thus obliged to take some shots of the Nott Memorial. I have keys for the observatory, which has a nice "porch" that overlooks campus, so I took advantage of that access to get a good shot from an uncommon angle.

A section of wetland in the Vischer Ferry Nature Preserve.

On another day, I went for a hike in the Vischer Ferry Nature Preserve over in Clifton Park (which produced a bunch of animal photos coming in a future photo dump), and took this as generally representative of the landscape. Not shown: approximately one billion tiny irritating flying midges. 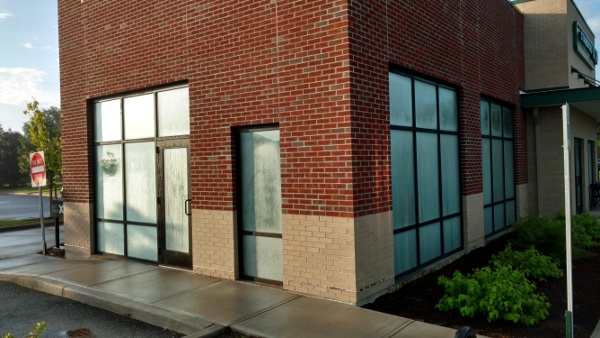 The Starbucks where I do a lot of writing, its windows all fogged up by a rapid change in humidity.

Speaking of things that are damp, we've had the usual late-summer wild swings in weather, including a stretch of very pleasant days followed by the sudden return of gross, swampy weather. This is the Starbucks where I do a lot of writing in the mornings before work, and no, that's not frosted glass. The fog effect, with the early-morning sunlight, was striking enough that I took a photo. 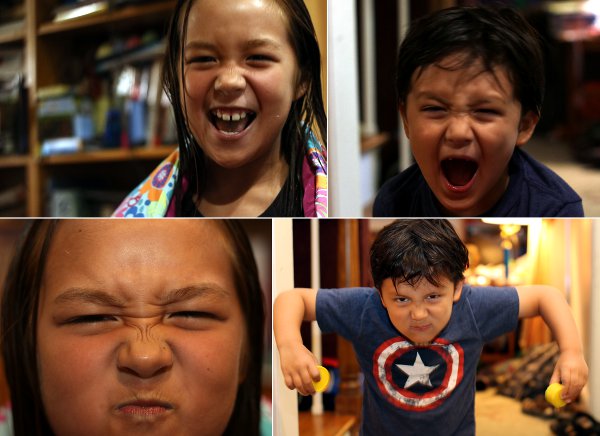 SteelyKid and The Pip doing the faces they make when I deliberately say wrong things.

One of the totally unexpected aspects of parenthood has turned out to be the amount of time I spend pretending to be a complete idiot to entertain the kids. We have a running game where I deliberately say things wrong, so they can correct me. For example, I complimented The Pip on his Aquaman shirt for one of the above, and he said "DAAAAAADDD! It's a Captain America shirt!"

They might be hamming it up just a tiny bit for the camera, here. 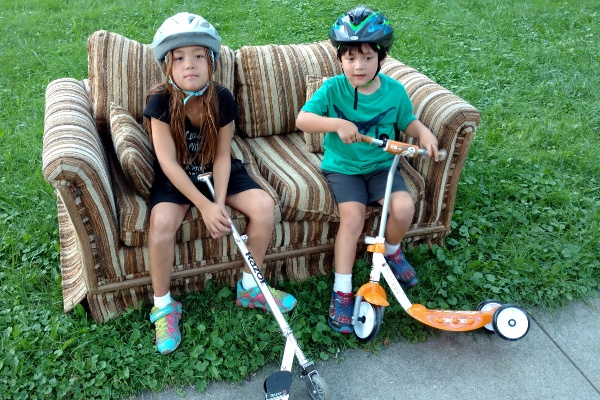 SteelyKid and The Pip taking a break on a scooter walk.

On a couple of the pleasant evenings, we got the kids out for scooter walks, generally by showing SteelyKid that an egg was close to hatching in Pokemon Go. This was one of those, when they took a break to sit down on a random couch that somebody had put out by the curb.

That's all I have time for right now-- have to go get the kids up for The Pip's first day at kindergarten...

Speaking as someone who had to come home from school and explain why my up to then family nickname, the first half of my given first name (Gay), was not defined as "happy" by my classmates, I think that now that The Pip is in kindergarten, it is time for a re-naming ceremony. I realize that Steely Kid and The Pip are not classroom names, but I also think that there is some leakage between online and real worlds. My own offspring units are now post-grad school, but it is amazing to look back and remember how powerfully growing up stepping off to kindergarten felt!

Thought you might be amused by this Grand Jury story - maybe it'll help with the pain: