Another in the sadly delayed wrapping-up of my photo-a-day project. These are all pictures from a hike in the Vischer Ferry Nature Preserve over in Clifton Park. We took the kids over there one time, but a thunderstorm started coming in before we got very far. While the kids were at my parents', I decided to go over one afternoon and take a more thorough walk around the place. This ended up going quite a bit longer than I had expected, as I misremembered part of the trail map, but I got some good photos out of it. 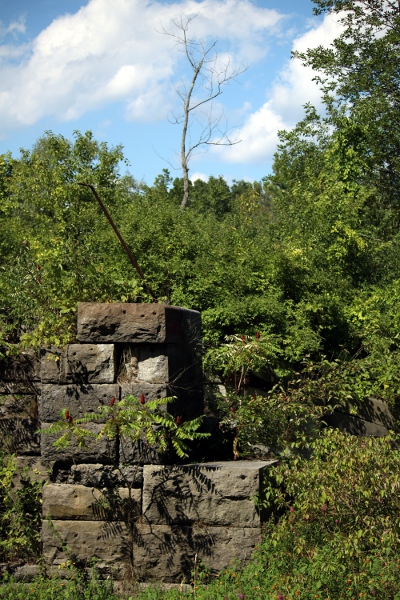 Part of the old Lock 19 from the Erie Canal, cosplaying as a ruined Mayan temple.

The park is technically both a nature preserve and a historical preserve, the historical part mostly being a stretch of the old Erie Canal, with the towpath serving as part of the hiking trail network. At one end of the park, there are the remains of an old lock from the canal system; it's not all as overgrown as this, but I like the way this looks like some sort of Indiana Jones movie set. 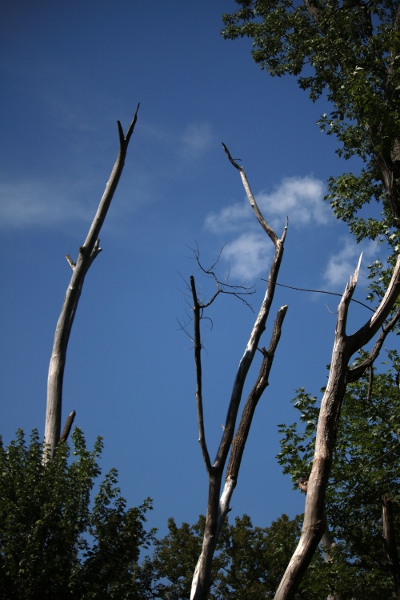 Dead trees in a swampy bit of the Vischer Ferry preserve,

The park is very flat, mostly down at the level of the river, and includes some swampy bits. Which feature the obligatory skeletal trees poking out of wet patches. I've never been certain whether this is technically a defining characteristic of a swamp, but they do look kind of cool. 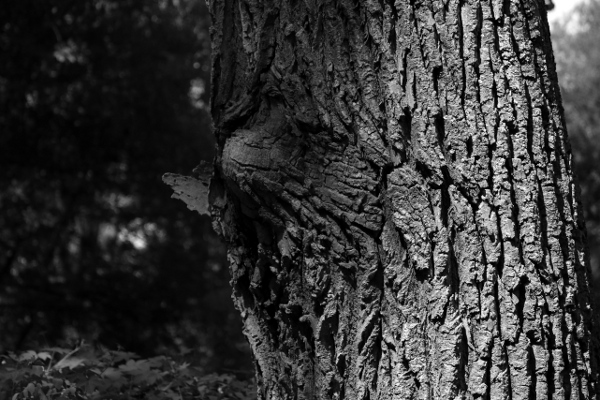 Black and white shot of an interestingly textured tree.

One of the things I thought about doing with this was taking a few days at some point to deliberately shoot stuff in black and white. The timing never worked out for that, but here's a token nod in that direction, a tree with an interesting bulge in the bark that was very nearly B&W even before I changed the color settings in GIMP. 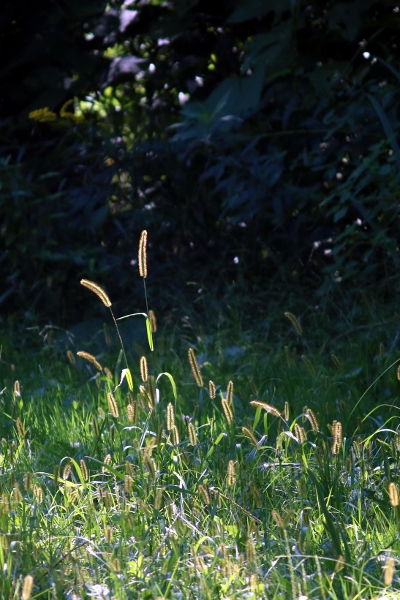 Grass on the edge of deep woods. 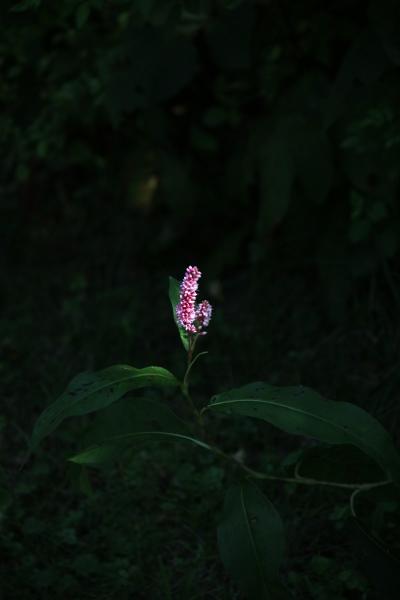 Pink flower catching a stray sunbeam in a shady spot.

One of the things I've always tried to do with the camera, but had a hard time with, is to capture cool transient light effects. I have dozens and dozens of shots of different scenes where the thing I was trying to capture was a particular effect of the light, and it just doesn't pop on the screen the way it did in person.

I can't say with any confidence that I've gotten better at this, but it does occasionally work out all right. 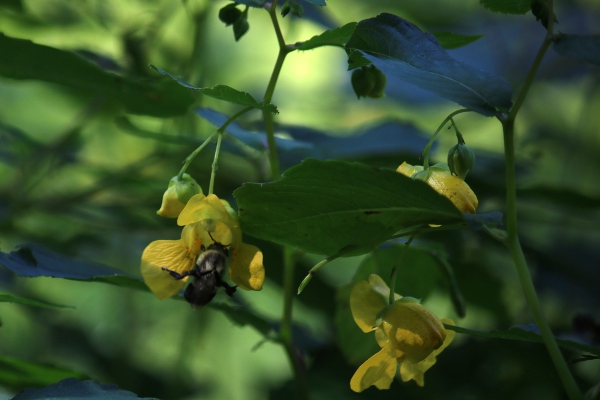 Bumblebee headed into a flower to look for nectar. 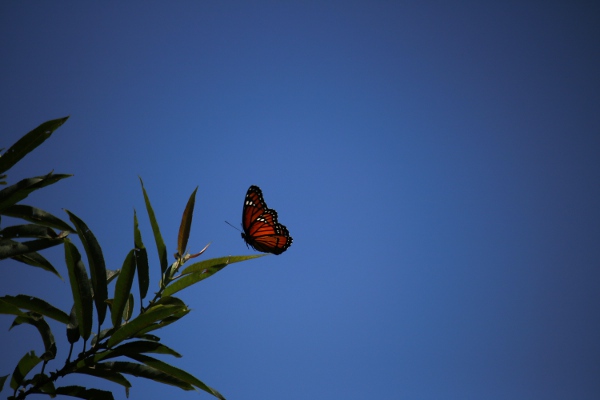 A butterfly striking a dramatic pose.

This was the second-best hike I've taken this summer, in terms of getting photos of wildlife-- second to taking the kids to Vroman's Nose and seeing a peregrine falcon. This one got a lot of different critters, including some insects. I'm not sure what these flowers are called, but they were everywhere, and it was neat to see how the bees wriggled their whole bodies inside. And this butterfly-- not sure if it's a monarch or a viceroy-- was kind enough to settle on a high tree branch where it made a nice photo against the sky.

(Not pictured: about a billion tiny flying midges, because fuck those annoying little bastards.) 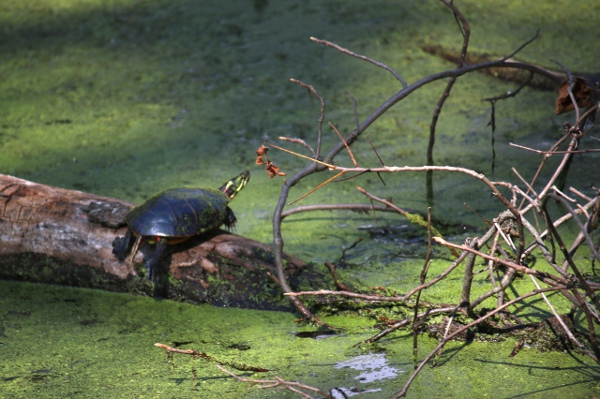 Also out in great numbers: turtles sunning themselves on various rocks and logs along the banks of the canal. These generally dove into the water as soon as they noticed me, so walking along the tow path was accompanied by a string of loud "PLOP" noises from either side as turtles made a break for it. I got a few good shots, though, thanks to the telephoto lens. 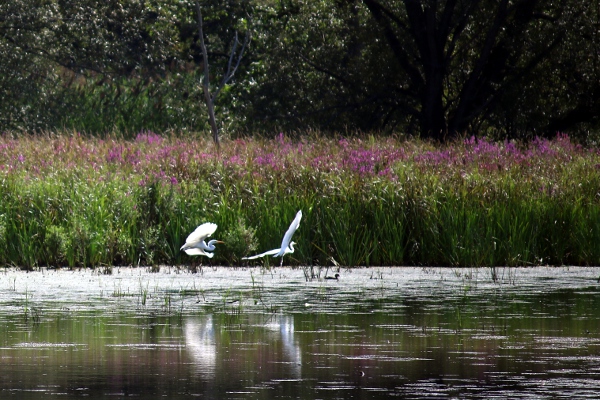 I spent several minutes watching this pair of egrets soaring and swooping around each other across a stretch of still water. I'm not sure if they were courting or fighting, but it went on for a good while, and was very cool to watch. 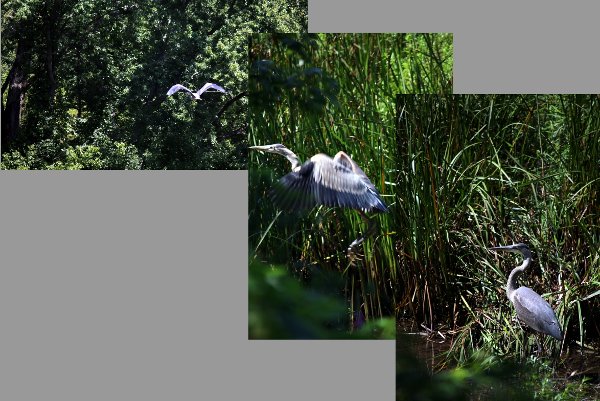 The other birds of note on this particular day were great blue herons, at least two of which were out and active. I stumbled across the one seen standing here when I think it may have been sleeping-- its head was tucked down so I couldn't see it, and it was so still I wondered whether it was a headless decoy of some sort. Then it heard a noise and picked its head up, and I got a couple of shots before it exploded into the air.

The flying one is actually a different bird, taken earlier in the walk-- I have a whole bunch of heron photos-- but I felt like playing around in GIMP, and it went nicely with the other two.

The yellow flowers are most likely jewelweed. The fun this about them is they get a seed pod that pops when it's ripe. It swells up and if you pinch it lightly when it's almost ripe, the seeds will explode from the pod. It keeps the kids occupied in a patch of jewelweed for a surprisingly long time.