I've skipped a few weeks of cute-kid updates, largely because I was at DAMOP for a week, and then catching on stuff I missed while I was at DAMOP for a week. The principal activity during this stretch has been SteelyKid's softball, with a mad flurry of games at the end of the season to make up for all the rained-out games. This has been sort of stressful, but it also led to the greatest Google Photos animation ever, so...

Anyway, softball was fun, providing the opportunity for me to take no end of photos with my telephoto lens, some of which are pretty good. SteelyKid was way into running the bases, which ended up providing material for a blog post, so everybody wins. And I got a lot of photos like this one: 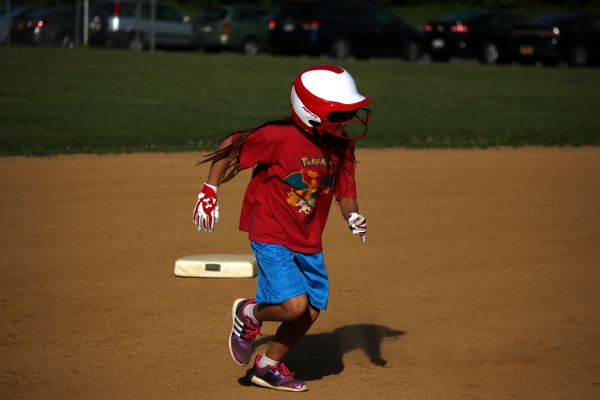 SteelyKid is pretty intense when she runs the bases.

Of course, while the intense running and dark helmet make her look a little intimidating in that, she's still a cheerful eight-year-old, which means there's really not a lot of killer instinct going on. For example, while she was playing first base, she high-fived every player on the other team who reached base safely: 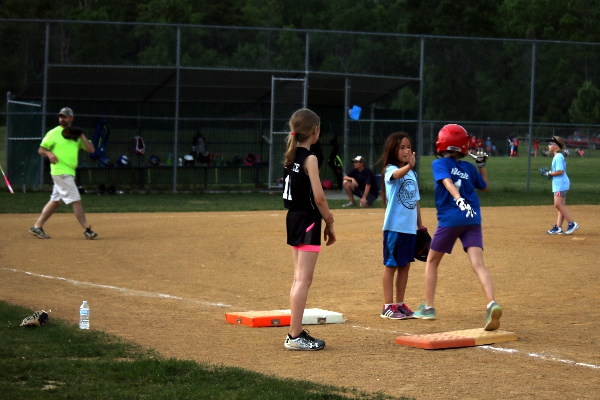 Softball's kind of a slow game, so boredom is always a danger when you have an eight-year-old's attention span. She finds ways to pass the slower moments, though: 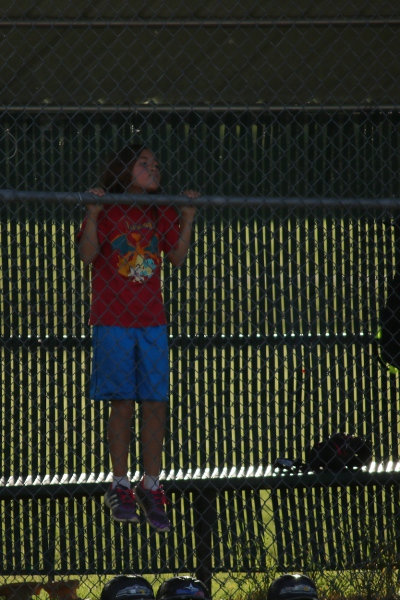 SteelyKid working on her fitness while her teammates bat.

(That's not the greatest photo because the sun is setting more or less directly behind that dugout, but GIMP makes it tolerably clear...)

Speaking of short attention spans, The Pip has also come to a lot of the games, though he mostly just runs around and pays no attention to softball. Here he is stalking Kate, who's watching SteelyKid play: 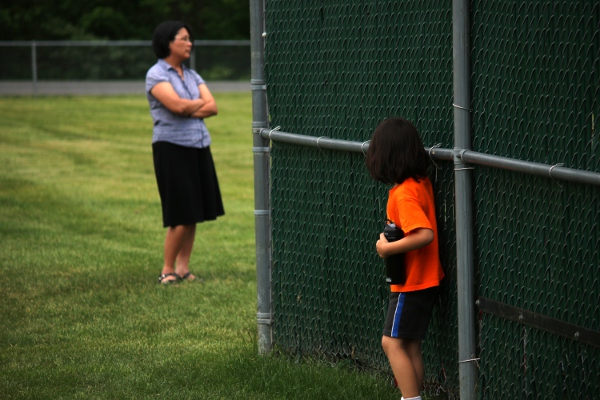 Much of the time, though, he's pretty effective at keeping one or both of us from watching the game, frequently roping us into games of hide and seek or tag: 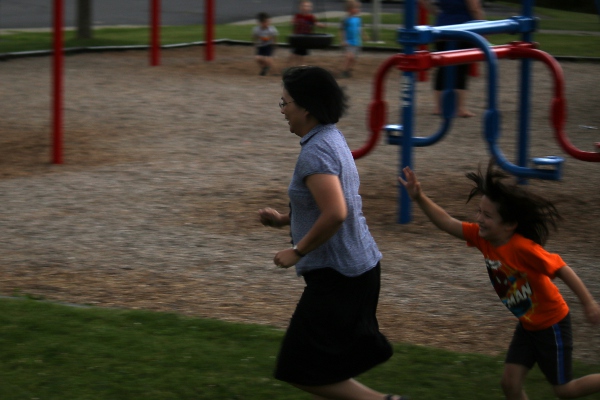 The Pip was It. Now Kate is.

(I also let him chase me around, but I'm the one who knows how to work the good camera. And more importantly, I'm the one who has editorial control over what pictures get posted here...)

And when all else fails, he can plop down on the ground and play in the grass: 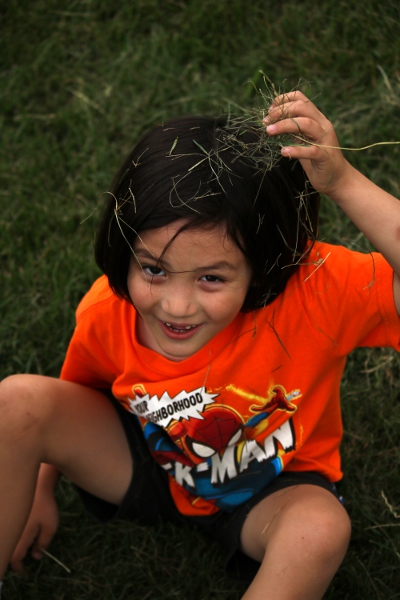 On the "programming note" side of things, I'm also aware that I haven't posted the Forbes blog recap from May. I'm planning to type that up and post it probably Wednesday morning. Wednesday afternoon, we're leaving on vacation for a while, going to Mexico with family, so you can expect a lot of photos of the kids doing tropical things in a few weeks...

You think this is a joke, but an RPG adventure from a while back pointed something out. (The setup was a real ninja clan using a "become a ninja" version of a dude ranch as cover.)

The need to hide in their brightly coloured 'ninja suits' resulted in the one thing that the fake ninjas were good at was stealth.

So beware today's safety orange ninja, tomorrow he will be wearing a dull green and you won't see him coming.

It reminds me of my cats. One was a orange spotted or mackerel tabby; she could be 3 feet away moving/making noise in the leaf litter and you'd have a hard time seeing her. The all black cat was a bit easier to spot but hid surprisingly well in leaf litter. The all white cat on the other hand was at a signifiant disadvantage except for the rare central Alabama snows. One day I looked across the pond (about 50 yards) and saw her stalking something in the woods; she was trying to be stealthy.