The end of the rainy season in California is arriving in a few weeks, and the April 1st snowpack measurement, which is a key indicator of water conditions, is tomorrow. As we approach the dry spring and summer months, the scope and severity of California’s drought will become more apparent, but it is already clear that California is faced with extraordinarily dry conditions, with impacts to all sectors and every corner of the state.

As part of the Pacific Institute’s Drought Response efforts, here is the March 31st update of the key information and graphics that characterize the current drought. Much of this information can be found, regularly updated, at the California Drought website: www.californiadrought.org.

Effectively 100% of California is experiencing abnormally dry to exceptional drought conditions, as reported by the U.S. Drought Monitor. 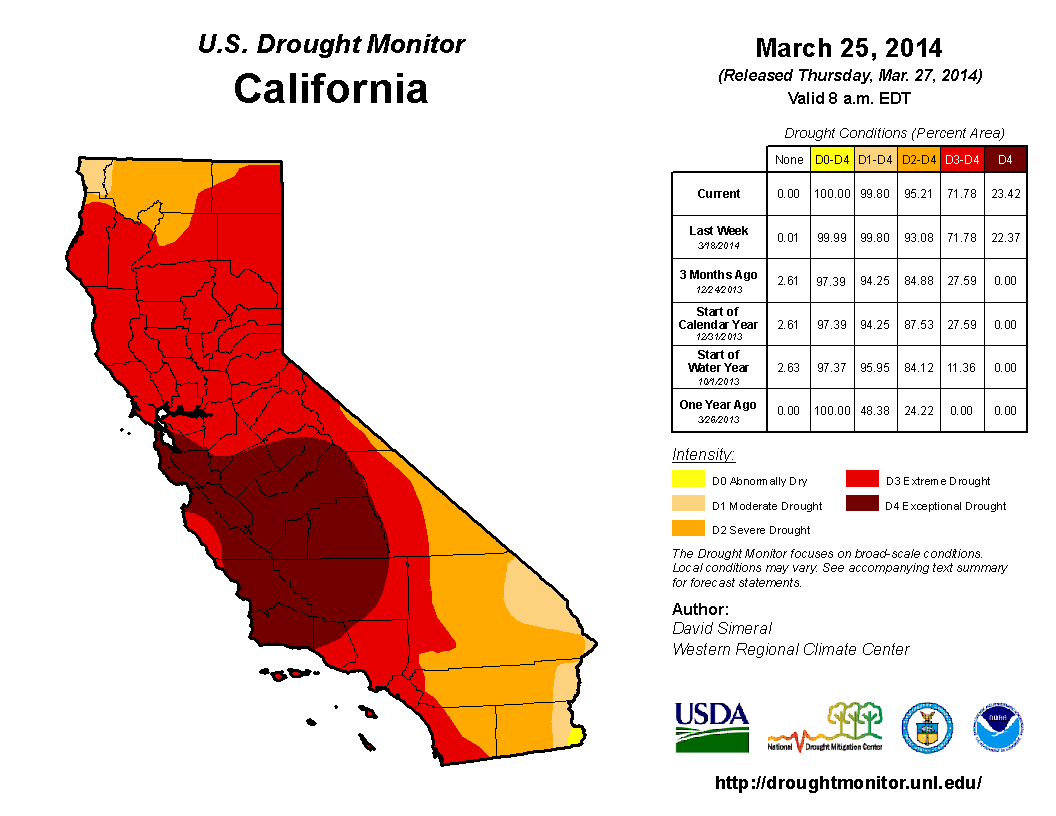 This map shows the extraordinary precipitation deficit since the start of California’s water year on October 1st from NOAA’s Climate Data Center through March 20th.

A key component of California’s water supply system is the winter storage of snowpack and its slow release during spring and summer months. Rains in the past week have slightly boosted snowpack, but as of March 30, the Sierra Nevada current snowpack remains near record lows and the water storage is only 29% of normal. 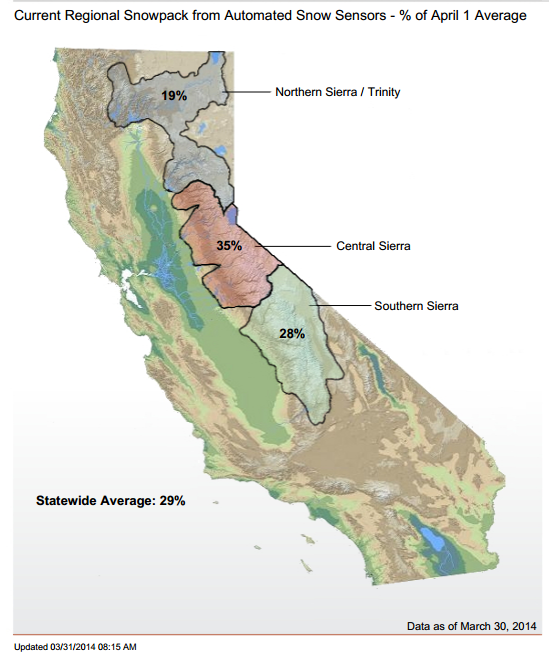 Current snowpack and snow water equivalent measurements for Sierra Nevada, as of March 30, 2014

California has built a massive amount of reservoir storage – over 45 million acre-feet of capacity. But high demand and low rainfall has led to substantial drops in water stored in these reservoirs. This graphic from the Department of Water Resources, updated today, shows that the state’s most important reservoirs are at around 40-50% of capacity, and well below the average for this date. 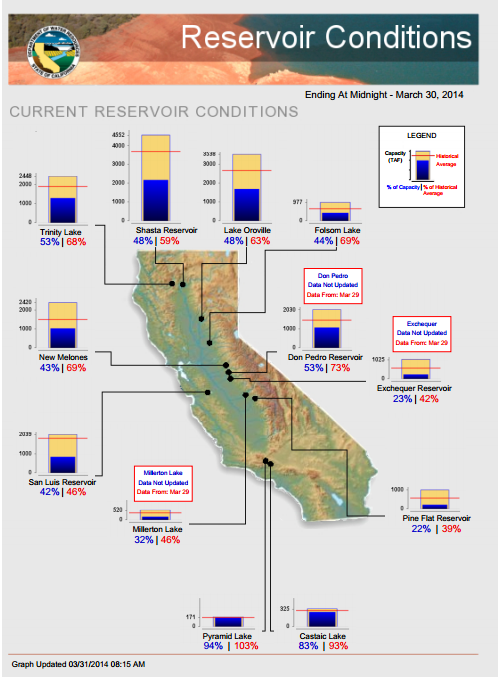 Water stored in California's major reservoirs, as percent of average for this date, and as percent of total capacity. Data from CA DWR.

A measure of drought of special importance for agriculture is the amount of moisture held in soils. As estimated by the GRACE satellite system operated by NASA, California soil moisture is extremely low (as of March 24). This will have serious consequences for farmers planning 2014 production. 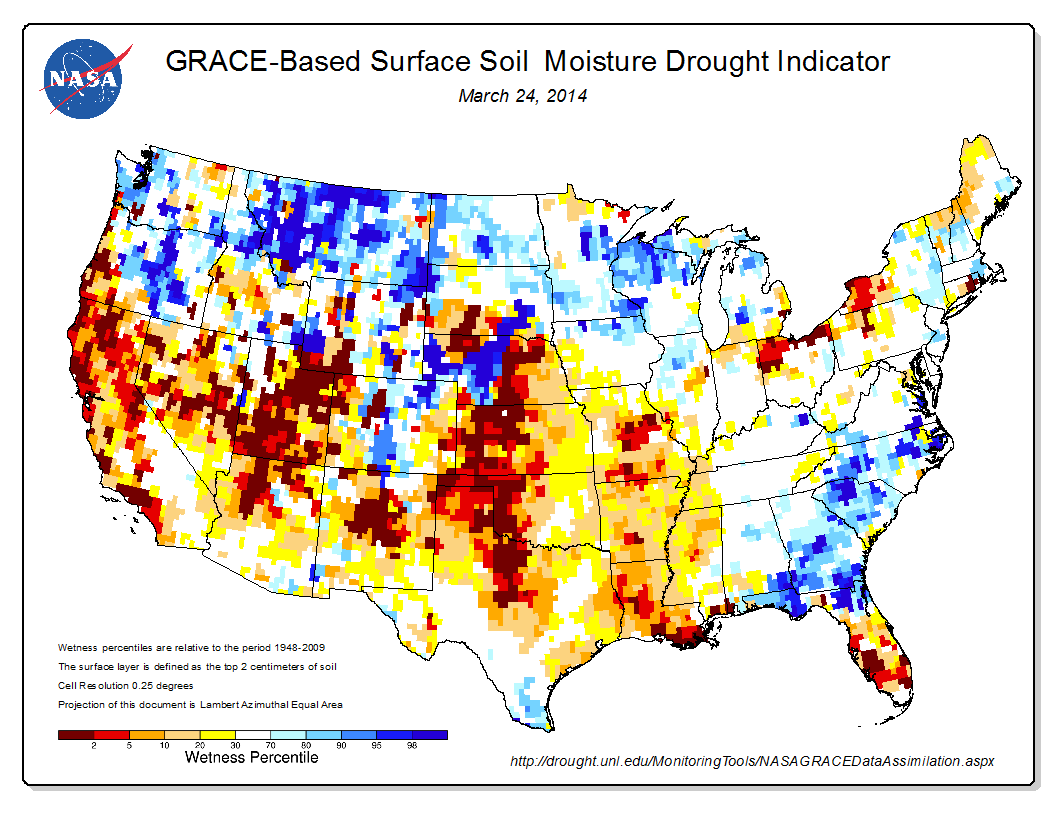 The most recent (as of March 24, 2014) estimate of soil moisture deficit. Source: NASA GRACE-based satellite data.

Additional Things We’ll Be Tracking in the Coming Months

Fire Frequency: The risks of wildfires increase during droughts. We’ll report on the fire season later in the year.

Agricultural Production: There is concern about impacts of water shortages on farm production, employment, and income, but until data are available on actual production, acreages left fallow, crop prices for California’s commodities, and more, it is not possible to accurately estimate what the overall impacts will be. We will report on this later in the year as data become available.

Fisheries Impacts: California has, for many years, perched on the edge of ecological fisheries collapse, especially in the Sacramento-San Joaquin Delta region. New pressures on water resources imposed by the drought and by growing demands to weaken environmental protections will have an impact on California’s fisheries that will become evident later in the year and in subsequent years.