Weekend Diversion: The smartest fish ever?

So I am preparing an audition video to be Dangerman this weekend, which will go up on youtube and get posted here next week. In the meantime, as promised for the weekend, I have a new weekend diversion for you: the archer fish, a.k.a. toxotes jaculatrix (hee hee). But what makes it so cool? Oh, I don't know, how about this slow-motion video:

Did you see that?? It's a fish that hunts insects by shooting them with water, and then eating them when they fall into the water, often catching them before they ever leave the air! What's really amazing about this is that the fish needs to be able to "shoot fish in a barrel" in reverse. 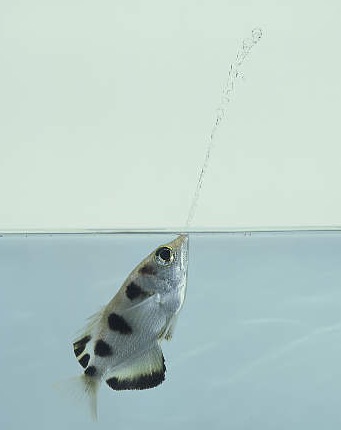 Shooting anything either from air into water or from water into air is actually really difficult, because light refracts, or bends, when it changes from traveling through one medium to another. The reason it happens is because light travels at different speeds in water than in air (see the hypnotic animation below), and the scientific law for how it happens is called Snell's Law.