Q & A: Why is the Microwave Background so Uniform?

startswithabang.com reader Andy has a great follow-up to his question on the Age & Size of the Universe, and asks:

why does the CBR “appear” to come from a light sphere that “appears” NOW to be larger than the universe WAS when it first set off in a straight line on its 13.4 billion year trip???

The "CBR" stands for "Cosmic Background Radiation," and it refers to the (presently) microwave background. Here's why Andy's question is actually profound, and was known for about 20 years as either the homogeneity problem or the horizon problem. The problem is that, when we look up at the sky, and take a look at the microwave radiation (that's the leftover radiation from the big bang), we find that it's the same temperature, 2.725 Kelvin, in every direction.

How uniform is it? If we subtract off 2.725 Kelvin from the entire image, we can measure the deviations from the mean temperature. What we find is that there is a range from -0.004 (blue) to +0.004 (red) Kelvin deviating from that mean temperature.

What causes that? The motion of us against the microwave background, or a doppler shift from our local velocity. The discovery of this was also worth a Nobel Prize, this time for George Smoot and John Mather, who co-discovered it.

More recently, we've discovered that if you take away that doppler shift as well, you still find hot and cold spots, but these are only about 0.00003 Kelvin in range from coldest to hottest.

This is the horizon/homogeneity problem: Why is the temperature of the microwave background so uniform in all directions? This is really hard; the Universe is 13.7 billion years old, but was only about 380,000 years old when the background radiation was emitted. If different regions of the sky are now separated by up to 93 billion light years, how is it that they have temperatures that are so close to being equal to one another? After all, they're so far away that they couldn't have been in contact with one another, so they wouldn't have a chance to thermalize, or achieve the same temperature. Look at the graphical illustration of this that I stole from UC Santa Cruz: 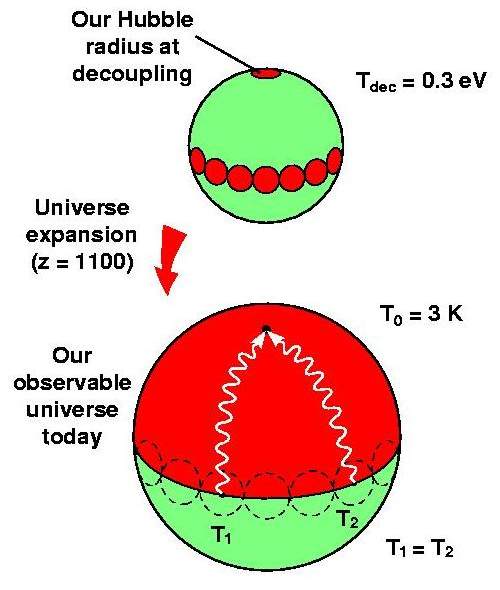 What the above image shows is that there are many different causally disconnected regions of space, that somehow have the same properties (e.g., energy density). If you ask how many, the answer is in the thousands. How do we solve this problem?

The only reasonable solution is to state that, somehow, these regions must have been causally connected at one time in the past, otherwise there's no way for them to have the same properties. How is this possible? The Universe needed to expand, early on, by an incredible amount. What we can imagine is, just like we have "dark energy" now, that causes the Universe to expand without slowing down, we could have had it when the Universe was very young, only much stronger. This means that the Universe, in only a fraction of a second, could expand by an exponential amount, effectively increasing its size by a huge factor, like 10100! Even if it started out only as the size of a proton, this theory, known as inflation, says that the entire Universe could expand to be trillions and trillions of light-years in size, practically in an instant. So if you have this inflationary period near the beginning of your Universe, 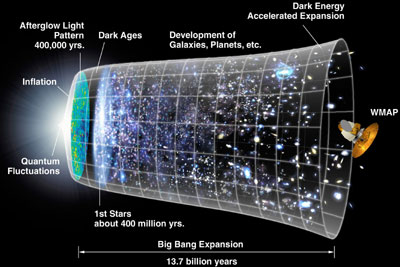 you then end up with a Universe that should have the same physical properties everywhere, since everything was in contact with everything else prior to inflation. Does it sound crazy, or plausible, or annoying? There's other evidence for it too, but this was one of the biggest arguments for it, and when Alan Guth discovered it, his paper was entitled "Inflationary Universe: A possible solution to the horizon and flatness problems," a testament to how good Andy's question really is!

WMAP results: Cosmology from the CMB

The cosmic microwave background is the radiation left over from the big bang. It's very uniform, 2.725 Kelvin everywhere. We're moving with respect to it, so there's a doppler shift, and we see that as a dipole moment in the Temperature. When we subtract that out, we see variations on the order of…

The New Age? It's just the old age stuck in a microwave oven for fifteen seconds. -James Randi About two weeks ago, the WMAP (Wilkinson Microwave Anisotropy Probe) team released their seven-year results, and I'm finally ready to tell you all about it. WMAP, remember, is this guy. By looking at two…

The Nobel Prize in Physics 2006

The Nobel Prize in Physics 2006 has been awarded to John C. Mather andGeorge F. Smoot "for their discovery of the blackbody form and anisotropy of the cosmic microwave background radiation". I read Smoot's Wrinkles in Time when I was doing undergraduation in Physics in Vivekananda college, Chennai…

Ask Ethan #10: Why is the Universe the same everywhere?

"One of the most tragic things I know about human nature is that all of us tend to put off living. We are all dreaming of some magical rose garden over the horizon instead of enjoying the roses that are blooming outside our windows today." -Dale Carnegie Our new Ask Ethan segment has been really…

I found my answer at:

"Since matter and photons were in constant contact, their temperatures were the same, a process called thermalization. Note also that the matter can not clump together by gravity. The impacts by photons keep the matter particles apart and smoothly distributed."

Could the dark energy be caused by the leakage of the gravitational force or gravitons from a parallel dimension?

"Could the dark energy be caused by the leakage of the gravitational force or gravitons from a parallel dimension?"