A Discovery of Gravitational Waves?

Two summers ago, I was in Les Houches, France, for a summer school that turned out to be one of the best experiences of my life. Seriously, we'd wake up every day and this was the view from the school: 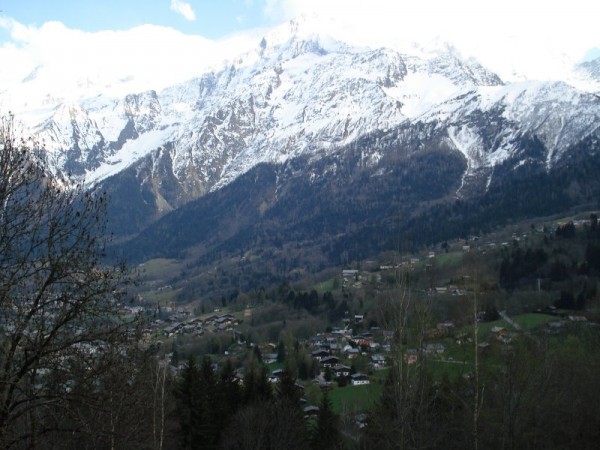 Well, the University/Institution that ran the school sends periodic updates to me. And they linked me to this release. Here's the interesting and (if it's true) sensational claim that the release makes:

Recently, a team of theorists ... performed a new analysis of all available CMB and LSS data including the WMAP and Sloan data and favor an inflation model where exist primordial gravitational waves: the amount of the ratio r between these waves and the density fluctuations is non zero in their model. ... In the frame of their model, the team obtains the inflaton potential which best fits the data together with the most probable value for the primordial gravity wave ratio r ~ 0.055. This value is within the reach of forthcoming CMB observations.

So now in English: based on the most recent data from the microwave background and from galaxy surveys, we can figure out some of the parameters of the theory (inflation) that set up the big bang. There are fluctuations in the energy density (corresponding to places where galaxies will and won't form), and we see those; those are the hot and cold spots in the microwave background. But what we haven't yet seen are fluctuations that are characteristic of gravitational waves left over from inflation/the big bang. Inflation has a very different prediction for gravitational waves than the big bang without inflation, so this could be very strong evidence for inflation if they find it. They can't measure the waves outright, but they can measure how strong the gravitational wave fluctuations are compared to the matter/energy fluctuations. They cleverly name this r, for ratio.

Now, in most simple models of inflation, r is teeny-tiny, and we'll never see it. But what they claim is to have evidence for r being at least 0.016 (at the 95% confidence level). Here's the graph of their results overlayed over the constraints from the microwave background:

Everything above the line that says "h=-0.99" is the stuff that's allowed at 95% confidence level; this means there's only a 5% chance, all things being equal in their analysis, that r is below that line. (ns is measured, by the way, and is about 0.97 +/- 0.02.) The scientific paper is available here, however, they do make an assumption here, that if it's false, invalidates their conclusions. Their assumption? That the potential that gives rise to inflation is a polynomial of the form:

Is this a good assumption? No. It's a shame that you have to be not just a scientist, but a scientist well-versed in inflation theory to realize that a big sweeping claim like this is probably wrongheaded. But now you know something that probably only a few thousand people in the world know! Happy Friday!