A Beacon from the Invisible Universe

Stars are like everything else in the Universe (to quote E.B. White): we're born, we live a little while, we die. The thing that people may not realize is this: stars have been doing this since before the Universe was visible! What do I mean by this? Take a look at this nebula, Barnard 68. 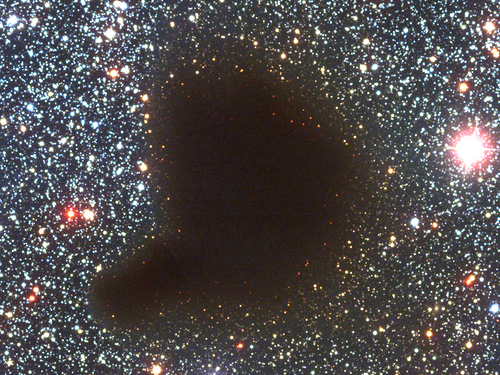 What's going on here? This is what astronomers call "dust", and what everyone else on Earth calls "neutral hydrogen atoms." Yes, puny mammal, practically all of the atoms in space are ionized hydrogen, and this is a good thing. How does this happen? You form stars, and the high-energy light (Ultra-Violet and higher energy -- i.e., above 13.6 eV) emitted by those stars ionizes whatever neutral atom it happens to run into. It took about the first billion years to completely ionize the Universe; before that, the Universe was opaque to light, with neutral atoms acting like dust. 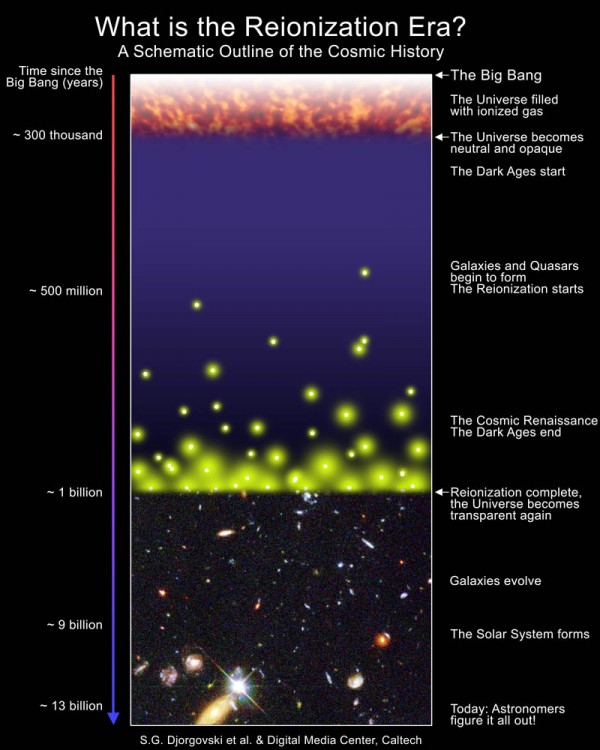 As the Universe reionizes, it becomes easier to see the light from whatever objects are behind it.

So what happens if we've got a star or galaxy back from when before the Universe was 1 billion years old? (It's 13.7 billion years old now.) Do we have any hope of seeing it? Well, they'd have to do something really extraordinary -- to become so bright -- in order to get through hundreds of millions of light years of dust. Well, what's brighter than a galaxy? A supernova, of course. And what's the brightest kind of supernova? A hypernova, particularly a hypernova that produces collimated jets. These produced the brightest object we've ever observed, a particular Gamma-Ray Burst.

What if we had a gamma ray burst just like this go off before the Universe was ionized, in its "Dark Ages?" What would we see? Anything at all? 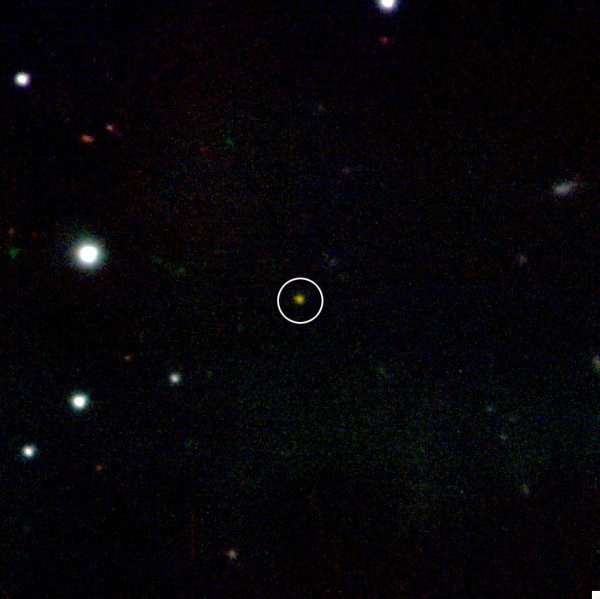 Say hello to the youngest object ever discovered in the Universe (and click to enlarge), Gamma Ray Burst GRB 090423, born when the Universe was under 0.7 billion years old, and discovered just 5 days ago! This thing is so far away that no visible light actually got out; we only saw the X-rays from it! And yes, it shattered the other distance records. Take a look for a comparison: 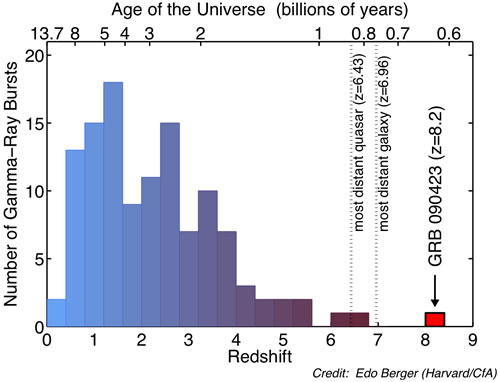 My concluding remarks? Holy crap! That sucker is far, and very, very old. I'm sure this record will be broken someday, but how fortunate that we were watching at just the right time! I can't hope to follow this up with anything better today, so just check out the new Carnival of Space: 100th edition to get your fix for space news!

this is where relativity makes my head spin. what do you mean "it is far". does it even exist anymore if it does, what distance is it currently? is that even a valid question? [gets dizzy, sits down]. And the universe has been expanding since the event happened; what does that do to the concept of a distance between us and the an object which we are seeing as it was when the universe was much smaller? [head esplodes]

Okay, I thought I understood my early cosmology better. My impression was that the CMBR was "released" when the universe cooled enough for hydrogen nuclei (ions, right?) to capture electrons, and become transparent to radiation. But now that sounds backwards from what you said.

These are two different things going on. Radiation, such as the photons dominating the early universe (and outnumbering protons by more than a billion to one) scatters off of charged particles all the time, and at all wavelengths.

But neutral hydrogen is particularly good at absorbing photons at particular wavelengths, namely anything in the Lyman, Balmer, Paschen, etc. series. Because the hydrogen is both moving and at many different redshifts, it can absorb huge amounts of light, particularly blue light.

By time that hydrogen gets reionized, the Universe is much, much less dense, so that these charged particles are over a million times lower in density than they were before recombination, and hence the Universe is now transparent to light.

Still confused, but less confused, which I'll totally settle for.

So, around 3-400,000 years after the Big Bang, we get neutral hydrogen, which is opaque to visible light, but relatively transparent to the high energy radiation which we now see as the CMB? And visible light transparency didn't happen till 1 billion years in? Am i getting it closer?

Matt, let me make edits to try to get it right:

So, around 3-400,000 years after the Big Bang, we get neutral hydrogen, which is opaque to visible light, but relatively transparent to the low energy radiation which gets lower and lower in energy as the Universe expands, until we now see [it] as the CMB.

Fantastic, thank you Ethan. I'm a layman, but I really like being able to explain the science of the early universe as accurately as I can.

Thanks for the explanation, from the articles in the main stream media it wasn't clear why the absence of visible light was an indication for age.
So one question, how can you distinguish age related absorption by the whole universe from a neutral gas cloud like in your picture somewhere between us and the nova, or, same thing, how do you measure redshift with no visible light?

Is there any other way to corroborate such extreme redshift-based distances? It seems like a big bet on a homogeneous and isotropic universe (and whatever other assumptions make cosmological redshift an accurate indicator of distance).

This blog kicks ass! I am extremely fascinated and at the same jealous that I can't understand the mathematical details behind it. But imagining that our scientists can achieve these feats of knowledge and knowing that we are basically nothing in comparison to the size of the universe fills me with so much awe and I am happy to be living in an era when such discoveries are possible.