The Universe is full of stuff; both normal matter and dark matter are practically everywhere we look. But the Universe looks as interesting as it does because of what gravity does to it. It takes a Universe that starts out with almost the same exact temperature and density everywhere (the initial differences are one part in about 30,000) and turns it into a web of matter littered with galaxies and clusters of galaxies at the densest places.

But one of the neatest things about this is that the Universe continues to evolve. We know how stars work, and we can tell when galaxies are forming stars. So when we look at this nearby, dwarf galaxy (only about 2 or 3 percent the size of our own), the pink is a dead giveaway. 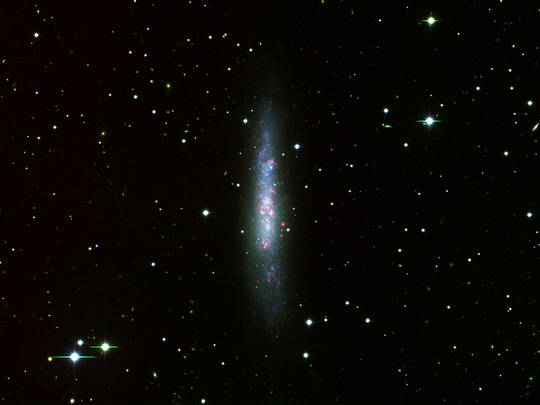 But this dwarf galaxy, NGC 784, is not alone. There are about 13 other, comparably sized galaxies in its neighborhood. The odd thing? They all started forming stars at the same time, about 30 million years ago. We see the evidence in all the dwarf galaxies in its neighborhood. Some (the larger ones) have had more star formation than others, but they all had it, and they all had it around the same time. 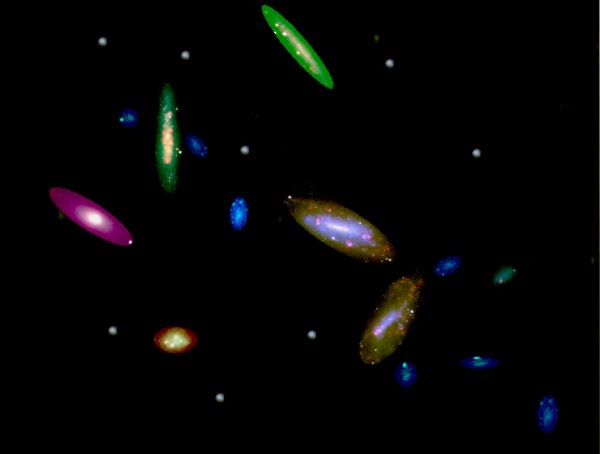 Now, one of our readers heard about it from this article, and took issue with the lead investigator's quote:

This is a strange thing. A priori, one would not expect galaxies that have nothing to do with each other, a few million light years apart, to make stars at the same time.

Why is this the case? Why wouldn't we expect these galaxies to form stars at the same time? Because -- in most, quiet galaxies -- the star formation rate in a galaxy is pretty constant. Sure, you'll have supernovae going off and they'll trigger star formation, you'll have collapsing gas clouds and they'll trigger star formation, but the typical rates of both of these is relatively low. What's going on in these 14 galaxies indicates that, about 30 million years ago, something happened to make all of these galaxies form excessive amounts of stars all at the same time. How does this happen? 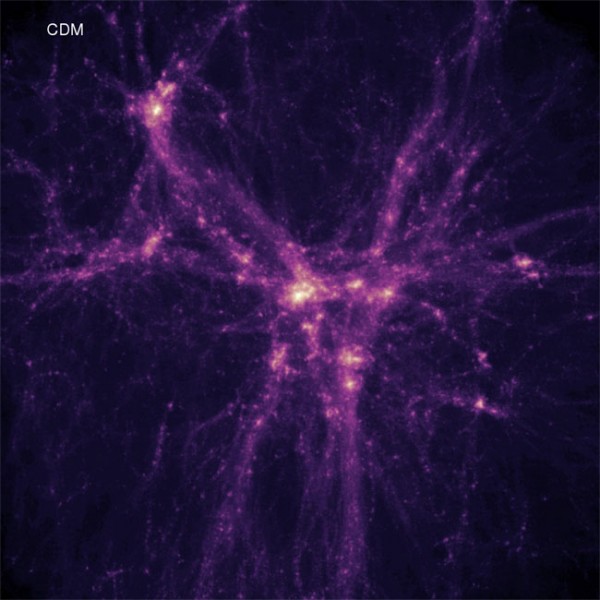 These galaxies aren't in a matter-rich cluster, but do you see how (in the image above) there are dense clusters of matter with filaments between them? These 14 galaxies are very, very close to where we expect a filament to be; they're almost directly between two clusters. What happens along these filaments? Both dark matter and normal matter flow along them, and can accrete onto any large clumps of matter (like, say, galaxies) they run into.

What's extra interesting about this? We wouldn't expect normal matter to do this unless there were dark matter! Just a little more evidence for those of you who aren't sold yet, and a little more coolness about how the Universe actually works for everyone!

I think my brain just exploded. In a roundabout why I'm now starting to wonder "can Dark Matter compress to ignite 'Dark Stars'?"

I don't think so, assuming dark matter are WIMPS. But the Universe is wacky, so who knows?

I've long been convinced that there is dark matter (not quite as convinced of dark energy yet). Maybe we can find out what it is with the LHC.

Why are the galaxies colored purple blue and green?

That's what happens when you let the astronomers near the crayolas.

Normal matter just tends to attract and "splat" together. But dark matter doesn't splat, and so it streams more easily between clusters. The normal matter can "piggyback" on this gravitational flow; that's why this gives us more evidence for dark matter.

Dark energy... I should probably do an intro post explaining that.

So the "filaments" are normal matter's reaction to a byproduct of dark matter's behavior? This is all terrifically interesting, the more you can write about it the better!

So the "filaments" are normal matter's reaction to a byproduct of dark matter's behavior? This is all terrifically interesting, the more you can write about it the better!

This article has been added to the Astronomy Link List.

The "filament" picture, is that something observed or a computer model based on position data? Those must be huge structures.

Isn't it amazing how the image looks like a neuron micrograph? BTW, is it a astrophoto or artists rendition of the flow?