What happens when things go too fast?

The coolest things about science are often at the frontiers. We love to press the limits of nature: to cool things down as close as possible to absolute zero, to raise energies as high as possible, and to speed them up as fast as possible. But when it comes to speed, there's an absolute limit: the speed of light in vacuum.

Relativity tells us why this is the absolute limit: the faster you want to go, the more energy it takes. But, as you get close to the speed of light, you effectively increase the mass of your speedy particle, which makes it ever harder to accelerate it. In fact, it would take an infinite amount of energy to get even a tiny, massive particle (like an electron) to reach the speed of light, much less exceed it. The fastest we've ever made an electron go on Earth is 299,792457.9968 m/s, just a few millimeters per second slower than the speed of light. 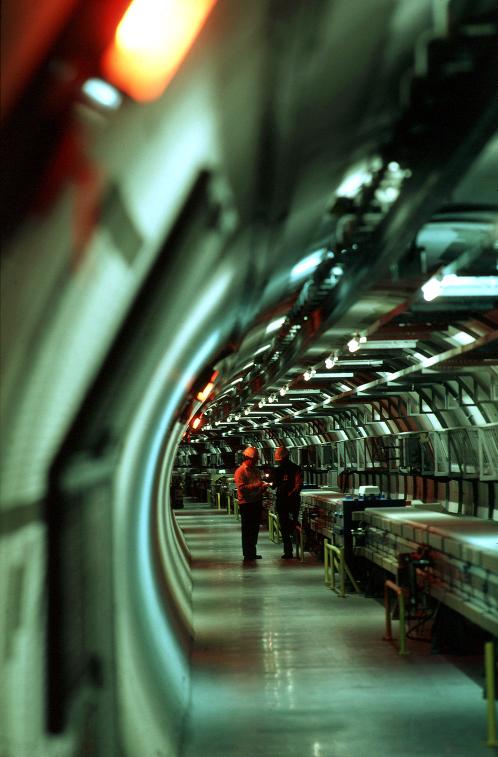 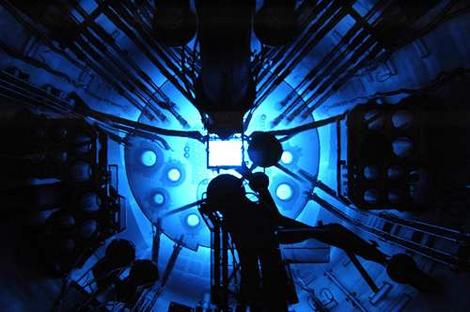 Well, you see blue light, known to physicists as Čerenkov radiation. What causes this? Nothing can move faster than the speed of light in vacuum, but anything can move faster than light in any material other than vacuum! As soon as this speedy particle enters this "slower-than-vacuum" medium, the medium turns on the brakes. All the charged particles (protons and electrons) that make up the medium interact with the delinquent speeder, and cause it to lose energy. 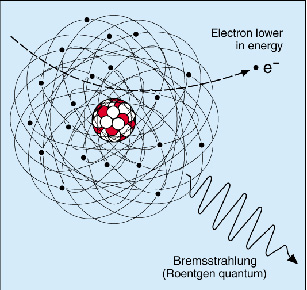 In this case, energy translates into photons -- or particles of light -- getting spit out. The diagram above shows one photon; in reality, light gets spit out in all directions, and it gets spit out perpendicular to the direction of motion. When you continue traveling through the medium, you wind up with a cone-shaped beam of light: 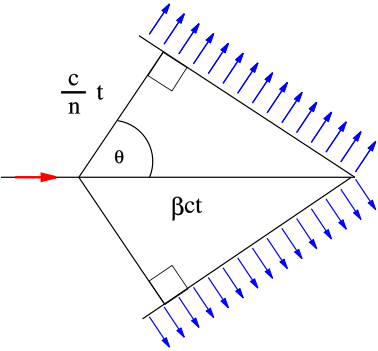 And you continue to emit it until you find yourself back in a vacuum again or you slow down to a velocity below the speed of light in that material. Why should you care? Because all you need to build a high-speed particle detector is a tank of water! In water, the speed of light is down to about 3/4 of light in vacuum, so even something as simple as radioactive metals will emit tiny amounts of blue light if you put them next to water. This is incredibly useful to scientists looking for fast-moving particles or rapidly moving decay products. Just build a tank of water and put some blue-light detectors around the edge. When something goes too fast, you see this: 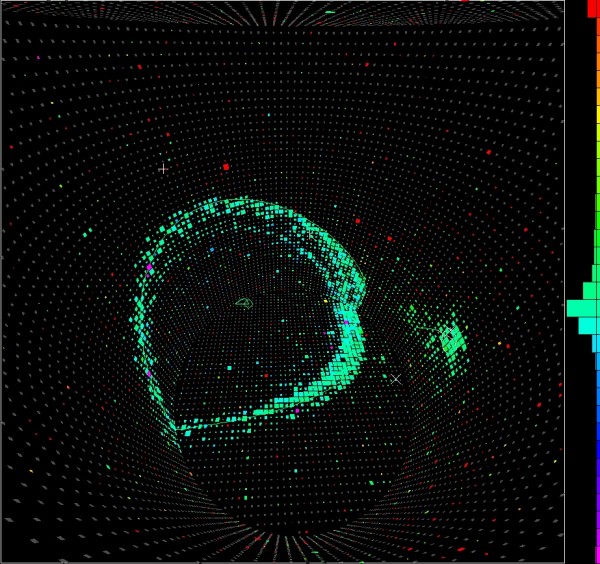 And just like that, you've tricked this elusive particle into showing you all of its secrets! (And that's how we find astrophysical neutrinos, for you fans of the little guy.)

"Alas! must it ever be so? Do we stand in our own light, wherever we go, And fight our own shadows forever?" -Edward Bulwer-Lytton Ever since it was conjectured that the speed of light was the ultimate speed limit of the Universe, we have tried -- with the most powerful of our tools -- to push as…

The Fun of Going Faster-Than-Light

"All our sweetest hours fly the fastest." -Virgil If you've been around the block once or twice, you know that the speed of light in a vacuum -- 299,792,458 meters-per-second -- is the absolute maximum speed that any form of energy in the Universe can travel at. In shorthand, this speed is known as…

You're making me angry. You wouldn't like me when I'm angry. -Bruce Banner Hey, LHC, what did those protons ever do to you? You take them, accelerate them to the fastest speeds we've ever accelerated protons to on Earth, and then smash them into one another with more energy than ever before! The…

Having things glow to show that they're radioactive is a media clichÃ©, but am I right in recalling that ordinary terrestrial radioactive sources would only glow in water, not in air?

@Vasha: I don't know of any naturally occurring radioactive sources that would emit Cerenkov radiation in air, because that requires quite a bit of energy--way more than needed for pair creation, even when you are talking about beta emitters. To get that glow in water, your electrons need only be a few hundred keV, which you can get out of a beta emitter. Note that alpha emitters do not create Cerenkov radiation in water (the required energy would be about 7000 times higher than for beta emitters), but some of their decay products might.

@vasha: you can get a glow in air, but remember that the particles need to travel faster than light so the condition is much easier to meet in water than in air. The refractive index of air ~1.0003 while water is ~1.3, so divide the vacuum speed of light by those numbers to get a rough idea of the speed of light through air and water. Reactor cores are immersed in water (heavy or light water depending on design) and some of the particles emitted produces the blue glow.

Radioactive materials as such will not necessarily glow in water, they need to emit particles with a high enough energy and this happens, for example, when you have a sustained fission reaction. I'm not sure what you mean by "ordinary terrestrial radioactive sources".

Huh - what's with the double-post? I swear I only clicked once ...

I remember standing on top of the small reactor in my university when they flipped it on for a shot (they were mainly doing short term exposure for nucleotide production). That blue glow was very impressive, so the bang-bang of the rods being shot out of and back into the core was startling.

Um, I guess by "terrestrial" I meant particles with lower energy than cosmic rays.

What's the off-cone signal in that last image?

Vasha, natural radioactive beta decay can get you up to, typically, about 0.8 times the speed of light. Fast enough to do Cerenkov radiation in water, but not in air.

Sili, what happened in this event was a neutrino interacted with the water, causing neutron + neutrino = proton + electron. The electron is what caused the cone, but the proton flew off in the other direction, causing the "off-cone" signal you're seeing. Sometimes the details are pretty amazing, aren't they?

I'm remembering a magazine cover that gave me the chills when I was a child in the early 1980s. It was about "nuclear winter" and was illustrated by a picture of a glove lying on a snowbank and haloed in blue light. Impressive but corresponding to nothing in reality!

Another astronomical application of Cerenkov radiation is to observe very high energy gamma rays. (Wiki link on my name.)

I remember going on a field trip to the reactor UW-Madison. The operators pulled the control rods, putting the core into prompt supercritical, boiling the water and showing the coolest thing I have ever seen: Cerenkov radiation.

Like I say, the images, events and what I did, remain with me, and I guess always will. I hope that you can at least bury your mental images away

Directed by Joe Winston and Laura Cohen, the documentary version of Thomas Frank's book What's The Matter With Kansas? has just been released..

I actually thought that it was possible to go faster than the speed of light, but as you pointed out so rightly, that is not possible - even for such small particles. Maybe in the future there will be ways to accelerate small particles such that it will become a possibility - that will then open up so many more oppotunities..

@ Mike: Well as far as exceeding the speed of light in the near future, its not looking to good. The universe seems to tweak things in order to protect this speed limit. Once you approach the speed of light your mass increases slowing you back down (so much so that it would require an infinite amount of energy to propel even the smallest particle 186,000 miles per second). Only about 3 dozen or so physicists have written papers on the topic of faster than light speed velocities. There are a couple of people who are currently trying to work it out (Tao Zero Foundation). They seem to be giggled at by others, but I think the effort is still beneficial. How do you know you can't if you never even try? So far it appears highly improbable, but you cannot rule it out 100%.

Well there is a saying in the old testament. I will bless those who bless you and curse those who curse you. Something like that. I that was words God said to Abraham and his children Israel.

You can travel at the speed of light and faster, just don't take any particles with you.

Hey, dudes, can you let me know where your church is so I can turn up in the sermon and take over the podium and tell you all about Mach's principle of inertial induction?

Since you're all being obnoxious, turn about is only fair, right?