After just finishing my series on the last 100 years in astrophysics, I was surprised to read an article in Bust Magazine that seems like it ought to be from 100 years ago.

You see, 100 years ago, segregating boys and girls was commonplace in schools. Not only that, but girls took "girl classes" like home economics, while boys took "boy classes" like trigonometry. One would think that we're past that by now.

One would hope so. 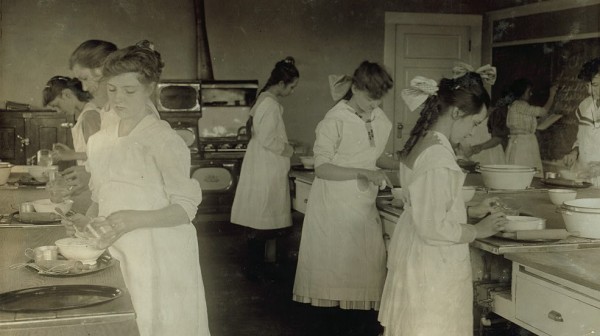 Without notifying parents, the Mobile County School System segregated by sex the entire student body of Hankins Middle School by sex for the 2008-2009 school year. The policy went so far as to bar boys and girls from even speaking to each other in school hallways.

Now, that's bad enough. There were seven other schools in Mobile that had implemented gender segregation as well, all of them without even notifying the students' parents. But at this one school -- Hankins Middle School -- there was a step that went even farther over the line.

Under the sex-segregation program at Hankins Middle School this year, teachers had been instructed to treat boys and girls differently. At a teacher training, teachers were informed that boys should be taught about "heroic behavior" but that girls should learn "good character."

Segregating boys and girls and treating them differently? Doesn't that sound like, oh, I don't know, separate and unequal? Teaching only boys about heroic behavior, why? Is the impliction that girls can't be heroes? Teaching only girls about good character, why? Implicity, because boys shouldn't be expected to have good character?

But it gets worse. Check this tidbit out (emphasis is mine):

Teachers were told that male hormone levels directly relate to success at "traditional male tasks" but that when stress levels rise in an adolescent girl's brain, "other things shut down."

Now, before you get too outraged, the issue is already resolved. The ACLU fought this and won, overturning it, and causing all Mobile schools to reintegrate starting this fall. But there are, somehow, people pushing for these backwards-moving reforms. Remember what Thomas Jefferson said, "The price of freedom is eternal vigilance." Don't let people get away with things like this. Don't let important things like this slide. It's your freedom, it's your life, and (regardless of your politics) it's your country, too. Treat it with the high value it deserves.

Sexism is derailing mathematicians from an early age

A study of students in Israel by Victor Lavy and Edith Sand has discovered a surprising result…or maybe not so surprising to you, but I was rather shocked. Math teachers score girls' performance lower when they know their identities. In math, the girls outscored the boys in the exam graded…

The Worldnutdaily, for some strange reason, has made Pat Boone - yes, that Pat Boone - a weekly columnist; I guess Perry Como was busy. Most of his columns are just plain embarrassing, of course, but this one about the ACLU was even worse than usual. Let's see if we can count how many lies,…

A Psychology Today article linked from today's edition of Arts & Letters Daily,entitled "The Loopy Logic of Love," discusses the mental tricks that lovers play when evaluating a potential mate. The article's author, Kaja Perina, writes that men and women in the first flower of a relationship…

Thanks for pointing this out to us, Ethan, TJ had it exactly right - we are never finished defending our freedom.

Bang Gang: We are somewhere around 13 or so away from making the Charity Challenge (http://scienceblogs.com/startswithabang/2009/07/weekend_diversion_a_cha…).

If any of you can re-blog it, or have any family or friends that can contribute, we could get this done today. Not that I want you to lose your locks, Ethan, but it is a noble endeavor.

Please do what you can - I don't want to go broke sock-puppetting the rest of the donations.

You are right; we are close on the Charity Challenge! By my count, the donation from DataJill makes this 86, which means we only need 14 more.

I will re-post it this Saturday if we haven't made it by then, and re-encourage just a few more people to donate!

Thanks for all of your support!

Why not use the same terminology for each side?

I'm surprised to hear about this. Mobile, AL, is within an hour's drive of Pensacola, FL, where I live. In fact, most of our local news channels originate in Mobile (not that I watch them). However, this is the first I'm hearing about gender segregation of any kind. Very weird.

I didn't use the same terminology because I don't think the implications are the same.

In teaching boys "heroic behavior", they're holding boys to a very high standard. Why? Because most people aren't heroes. But they're teaching them the importance and value of being heroes. In not teaching girls that, the obvious implication -- at least to me -- is that girls are not suited to being heroes. And that's why I said "can't".

So yes, I have treated the two cases unequally, because I think the phrasing that the school system used held the different genders to different standards. I'm sorry that I didn't make that clearer in my initial article.

I think Ethan is right to phase the two differently. The main problem I have with those kind of things is that by kind of assuming guys are better than girls they put a value judgement on different behaviours: in this case the assumption made is that it is better to be 'herioc' than 'good'.

God knows why. I would have thought it was the other way round myself.

If only those damned females would just do as they're told. The muslims have it good - if they don't obey you can beat them and if they still don't obey and die from the beatings that's their problem.

Yup, about 100 years after womens' suffrage and some people just can't deal with the gals being able to choose what they do. Mobile is one of those places like Waco that make it to the news every few years and it's never good news. Speaking of Waco, it's been a few years since it's been on TV.

I'd just like to point out that "good character" doesn't mean how to be a decent human being, it means being an obedient Barbie doll. How to treat your husband so he doesn't run away or beat you, how to act like a Lady rather than a Whore, hoe to entertain your man's guests, etc. You should pick up a girls' training manual from, oh, maybe 1930 to see what I mean. A friend showed me such a manual from Australia published in 1968 and I thought it was even worse than my grandma's manual from ~1930. (Then again that could simply be some bias since I hadn't seen my grandma's manual since my early teens.)

Sex segregated private schools are quite common here in the UK. I went to one. They don't have to be sexist like this one clearly is, though.

LanguageLog's Mark Liberman has done a lot posts tearing into the bad science behind the non-coÃ«d movement.

I'm not convinced that separating the sexes and using different paedagogies for them is a bad idea, but I'd like to see some proper research.

Teaching them completely different subjects like this, though, is bigotted madness.

Sili, the sexes may very well benefit from different pedagogies, but this is still overgeneralizing. You'd be much better off segregating individuals based on their abilities and learning styles. Using gender as the sole means of determining aptitude remains ridiculous. It wouldn't matter what the research says, as the result is still a generalization applicable only to a population as a whole.

I wonder how far one would have to dig to find some good Christian motives behind all this.

Funny, I live in Mobile and totally forgot about that! Yes, the news IS rather biased here, how did you know? I guess I thought it was resolved right away, didn't realize they were STILL doing it. I mean, HELLLLOOO, haven't we learned our lesson Alabama?

Or maybe I forgot because there's so many more nonsensical government decisions and actions. It's like, as far as Alabama is concerned, there is only one Constitutional Amendment, Right to Bear Arms Y'all. Every day a gunshot death is reported. Yet City insists on 'Police Checkpoints' to 'check license, insurance etc. & get the drunks off the road' with hardly any drunk driving fatalities. What happened to My pursuit of Life, Liberty & the Pursuit of Happiness? My Right to be free from search & seizure without probably cause?

Yes, my friends, it truly is like a different country here (I'm from Detroit, so I can see there's a difference). But hey, the beach is real pretty and they have one great radio station.

Oh, the school issue? I'd be curious on other states and their schools. Seems like here, from middle middle class on up, everyone sends their kids to private schools, while public schools are closing for lack of money. Wasn't like that where I grew up.

Thanks for letting me vent.

& to prove the news bit, headline after this one today 'Black Deaf & Disabled Man tasered & peppersprayed by Mobile Police'
followed by
'15 year old girl shot to death by friend.'

I'm sorry that there's so much that makes you unhappy about where you live. All I had heard of in the way of recent absurdity down there was this, which goes right in line with your complaint about wasted resources.

Still, I know some wonderful people who've come out of Mobile, AL!