When I was a kid, Mercury and Pluto were the bookends of our Solar System. The two smallest planets, one of them was distant, icy, and raw, and the other was close in, speedy, and overcooked. One of them had the New Horizons mission planned for it, and the other had the Messenger mission.

Only one of them is still a planet, but Messenger just passed by Mercury for the third (and final) time. In early 2011, Messenger will settle into orbit around Mercury. Until then, you'll have to content yourself with these brand new images -- many just released today -- from Messenger's flyby of Mercury over this past week. Click all images to see them full-size. First, the approach using both the wide angle camera (top) and the narrow angle camera (bottom):

When you fly a little closer, you can take a great look at Mercury's Terminator, which is my favorite name for the border between day and night. 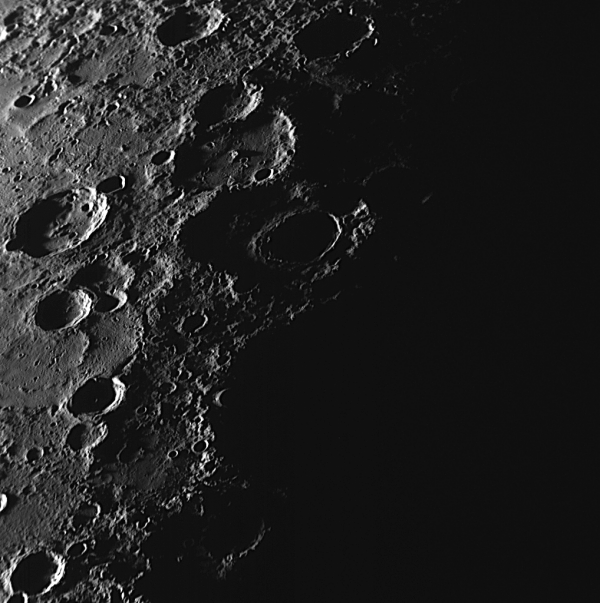 This is a world where days and nights are comparable to years, where the atmosphere is about one atom thick. Mercury is the second densest planet in the Solar System, behind only Earth! (In your face, Hermes!) Some areas are relatively young and crater-free: 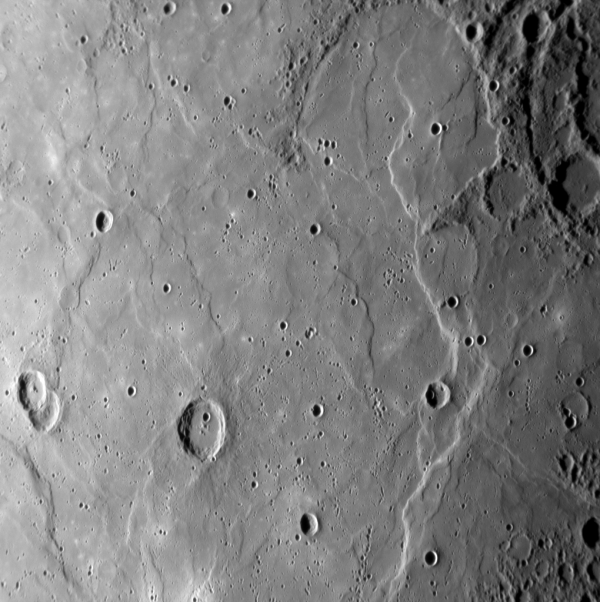 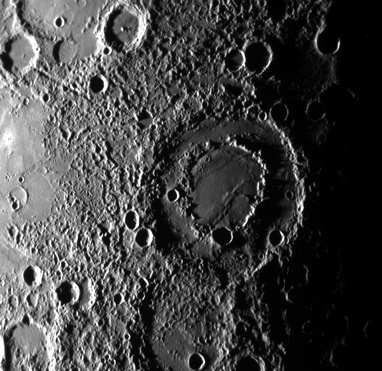 And of course, no planetary fly-by would be complete without the mandatory lookout towards the horizon: 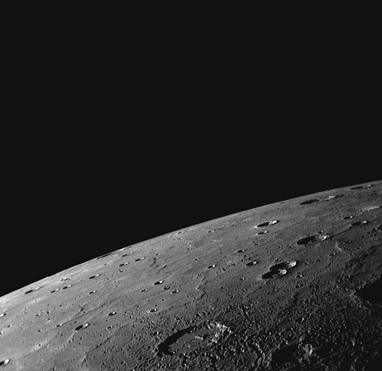 Amazing how black space is when you don't have an atmosphere to contend with, isn't it? There are a few more pictures available as well: 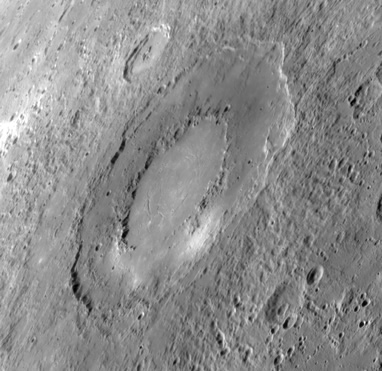 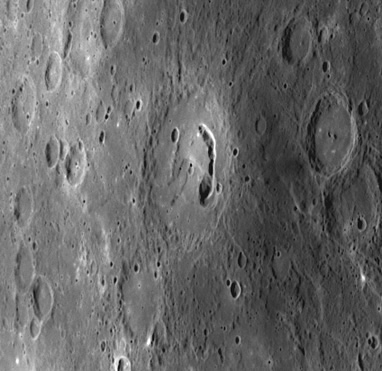 All of these images were taken from the Messenger web site, and you should check them out; they've got a live-update mission clock and odometer (!) on their site. Messenger is the first mission to Mercury in my lifetime, and only the second one ever, so I hope you enjoyed getting a rare glimpse of this baked, barren world.

(And I've always wondered, it's named Mercury, but wouldn't Icarus be more appropriate? Too close to the Sun, wings melted, death, etc.?)

I never thought of the Icarus comparison. It seems far more fitting indeed!

The blackness of space in these types of photos always makes me wonder about why we don't see the stars. I assume it is because the foreground brightness makes the camera 'stop down' to the point that the starlight is not visible. So, I wonder if we were there in person and could just put up a shade to block the foreground from your eyes would the stars just pop out? If so, twould be an interesting thing to see.

(And I've always wondered, it's named Mercury, but wouldn't Icarus be more appropriate? Too close to the Sun, wings melted, death, etc.?)

What, for a pathetic intermediate-period planet like Mercury? I mean, the orbital period is only .06 of an order of magnitude off 100 days! The orbital semimajor axis is over 80 solar radii! The planet's taking a nice long leisurely orbit there, with relatively cool temperatures. It's slacking off if you ask me.

WASP-18b and COROT-7b are far more worthy candidates for such a name. Mercury's just a pretender.

Any idea why some areas seem barren of craters while other areas are loaded with craters? Is it just luck of the draw, or is there something more to it? E.g. because of the slow rotation, most impacts from a multi-day meteor shower would hit the same area? Or one side tends to face outside at a time when meteor activity tends to be heavy? Or all areas are hit about equally, but some craters are newly covered by ... space dirt?

You can do statistics on the craters, and they are not consistent with a random distribution. Therefore, there's definitely something more.

What is it? Your meteor theory is interesting because of the fact that Mercury's orbit is periodic, but it also precesses, so that should even out over a few hundred thousand years.

But -- AFAIK -- some areas on Mercury's surface are younger than others. The older areas have more craters on them, including deep, large ones, while the youngest areas are relatively flat and crater-free. We'll learn more about Mercury once Messenger actually gets into orbit around it and starts taking data, but until then, we'll just have to be patient! Anyone know more? Brian?

I meant this Brian. He's my old roommate from College, and a geophysicist.

Augh! 2 more years before it's in orbit! And I complain how long it takes to get funding for, build, and launch an earth observing satellite.

How bright would Mercury be? I see no signs at all of stars with Mercury properly exposed.

the similar lack of stars in moon photos is one bit of "evidence" that moon hoaxers use to claim the landings were faked. but you are right. the planet (or moon) surface is SOOOOO bright compared to the stars that proper exposure of the surface means the stars are not visible in the pictures.

@ jdhuey: If you could shade all the vastly brighter objects from view, yes you could see the stars. The old, stare through a tube at the sky practical joke could actually work on any body without bright objects in view. (on earth the "object" is atmospheric scatter) From the albedo and illumination, Mercury's surface should be somewhere between 7 and 3 times brighter then the Moon's, depending on if it is at perihelion or aphelion.