My heroes had the heart to lose their lives out on a limb,

And all I remember is thinking, "I want to be like them!" --Gnarls Barkley

And here's a new discovery (to me): the Violent Femmes version to help you through your post-Halloween Monday:

The Ares I-X rocket has been all over the news recently. I'm not sure that the news coverage sufficiently showcases how impressive this rocket actually is. Sure, you've all seen a picture of the rocket on the launchpad. 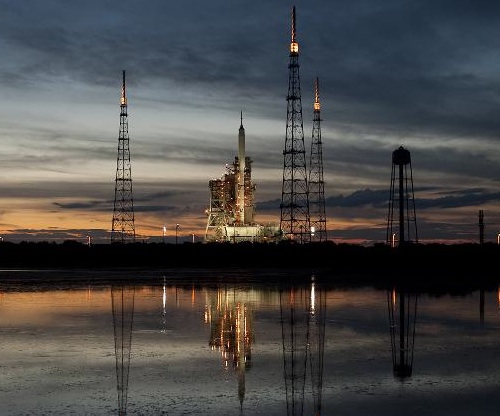 Yes, the rocket has a long history. Yes, it's nearly twice as high as the space shuttle (at a whopping 327 feet, or 99.7 meters). But did you know that when it was rolled out, it was attached to the launch pad by only four bolts? 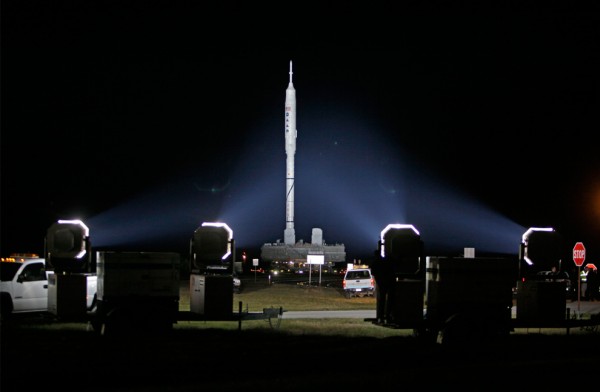 And perhaps most impressively, do you realize how tall 327 feet actually is? Perhaps this vertical panorama of the rocket before it was rolled out expresses it better than words can. 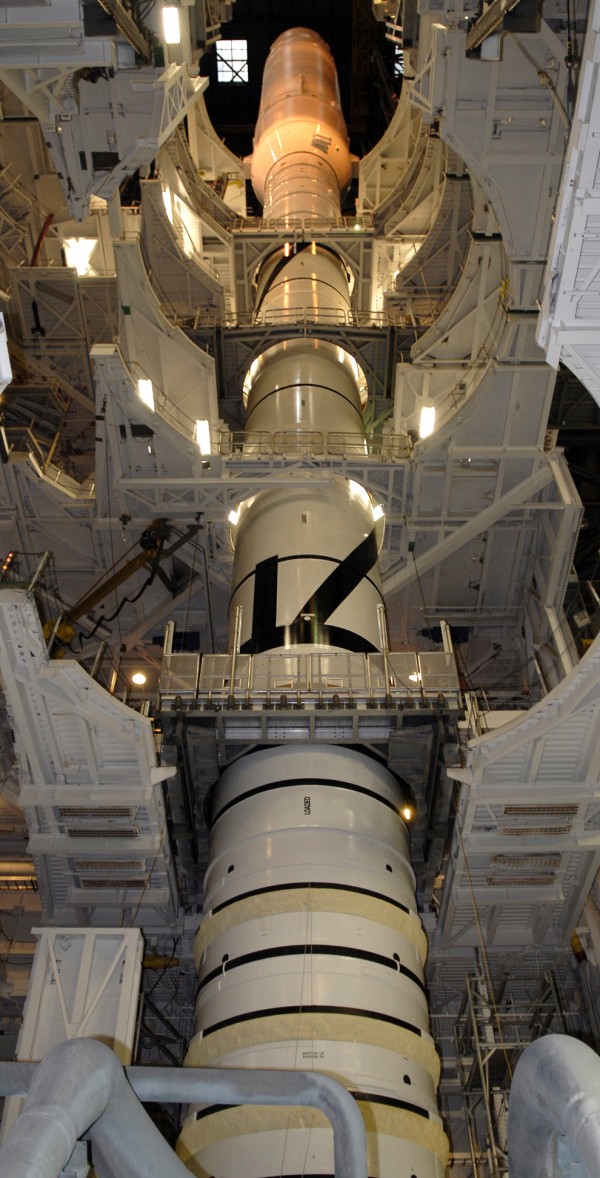 Of course, before you're ready for launch, you had better test your engines. And that means testing the multiple different stages of the engines. Take a look at the following two images to get an idea of the thrust involved. 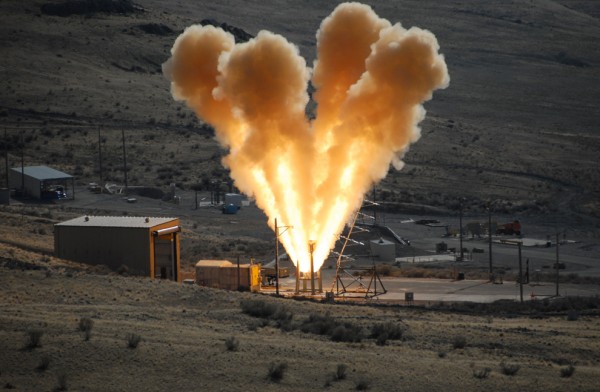 Both initial stages (above) and subsequent (below) need to be tested. 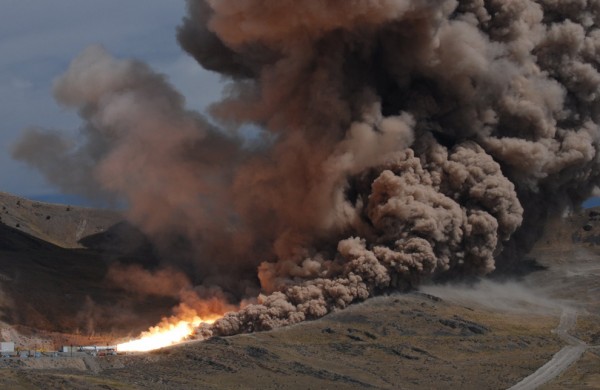 The 2.6 million pounds of thrust that Ares I-X can produce is enough to accelerate it from 0-60 in under 8 seconds. Not bad, considering it's accelerating a rocket, and it continues to accelerate for minutes, rather than topping out after a few seconds like your car does. We got a great view of this last week, at Ares I-X's maiden launch. 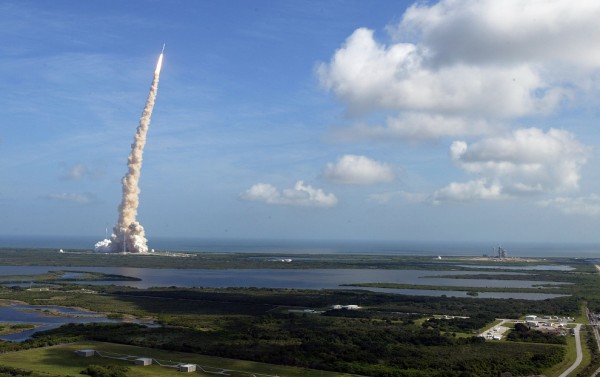 You get your rocket going quickly enough, and you wind up making a shock collar, as the difference in pressure at high speeds is enough to pull water vapor out of the air in a cone-like shape. Rory Duncan captured this beautifully: 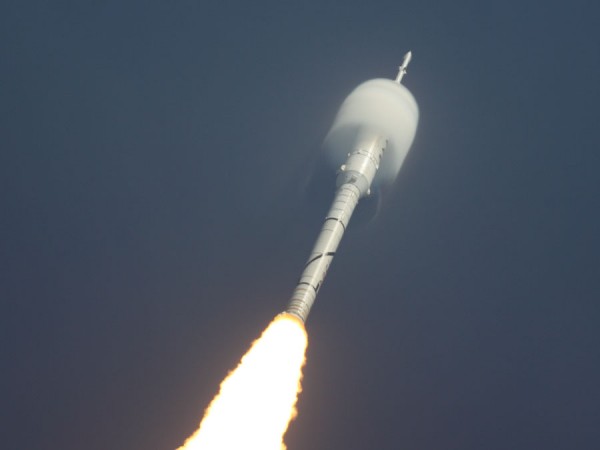 And finally, because of a slight malfunction in one of the parachutes, part of the rocket that splashed-down into the ocean got damaged upon impact with the water. Amazing what a "soft" surface like water can do to a hard one like high-grade metal alloys used in constructing this rocket. 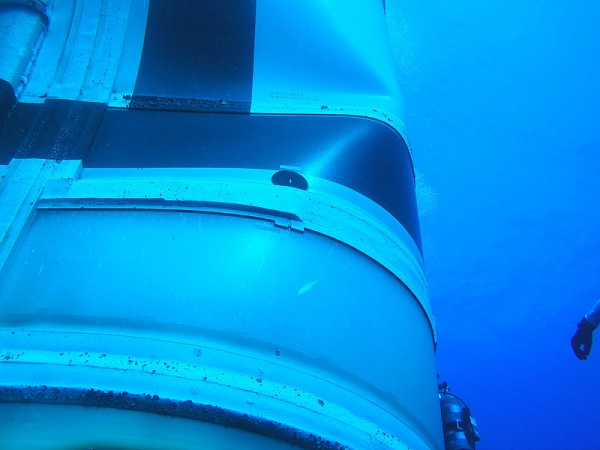 A promising start to the rocket that may ultimately lead to a return to manned exploration beyond Earth's orbit! And thanks to Universe Today, Astronomy Picture of the Day, and Graeme McMillan at io9 for providing many of the amazing photos found in this special!

As impressive as the Ares I is, the planned Ares V makes this one look like a match stick.

Let's not get too excited about this Potemkin rocket, the Ares 1X. While visually impressive, this rocket tested only a small number of the systems that need to be developed before Ares 1 is completed.

This rocket is all about looking good. The SRB is 4 segments not the 5 segment SRB that may fail due to thrust oscillation. A 5 segment test could have retired important risks, this rocket does not.

I'll be impressed if and when the Ares 1Y flies with real systems. For now, we can enjoy this show. But it is mostly just a show.

I think the first test you show is actually of the emergency abort system at the top of the crewmodule.

FLYP did a pretty phenomenal blog and story on the future of NASA + Ares 1X, you may find it interesting--check it out:

Two questions which I cannot seem to find answers for:
1) How much did the rocket weigh (on the launch pad as opposed to dry)
2) During the ground test of the first stage, how was the rocket bolted to the ground. There does not appear to be anything keeping it down

Goodman lays it out very well. The Augustine Commission tread lightly on Ares I, but did note the technical and financial problems. The GAO report of 26 August 2009 was less kind ( http://www.gao.gov/new.items/d09844.pdf ). Other comments at http://nssphoenix.wordpress.com/

2) Four explosive hold-down bolts are fired at ignition. Then the rocket sits there for 0.2 seconds as the the thrust builds up before it lifts off.

I've always been impressed by the brain power that put these amazing rockets together. To visualize such creations and then to actually bring them off the drawing board into actual existence is simple incredible. Even something as electronically simple as an airsoft minigun is impressive. Personally, I haven't advanced beyond the nerf rocket launcher stage, but i definitely admire the guys who have.

"because of a slight malfunction in one of the parachutes, part of the rocket that splashed-down into the ocean got damaged upon impact with the water."

slight malfuntion is never the sort of words you want to hear in the same sentence as parachute....
http://www.onlineforextradingstrategy.com/managed-forex-trading.html