I'm always happy to receive questions from those of you interested enough to ask them, and every once in a while one of them feels just right to write up an article about it. Today's comes from Brad Walker, who asks about the inside of gas giants. Specifically,

The question pertains to the insides of gas giants like Jupiter... My question is, supposing Jupiter is made of Metallic Hydrogen, and it was dragged close enough to the sun that its atmosphere evaporated, what would be left? How would it go from a very strange non-terrestrial core to a rocky body like CoRoT-7b? Why wouldn't the hydrogen simply decompress into less exotic forms of hydrogen? I'm probably wording this question all wrong, but in summary, I'd like to know what would happen if you cooked away Jupiter, and what would be left.

The planets we know well, the ones in our Solar System, fall into two distinct categories. We have the gas giants, huge and domineering in the outer Solar System. 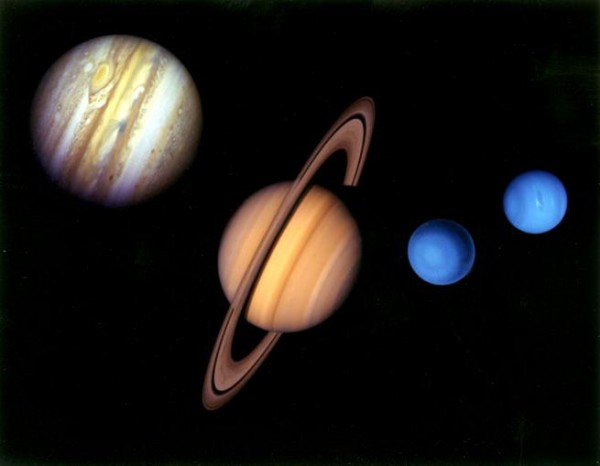 On the other hand, we have everything else: rocky planets, moons, comets, asteroids, and Kuiper Belt objects. The thing that these all have in common? They're all smaller, solid masses. Take Mars and one of its moons, the captured asteroid Deimos, as typical examples. 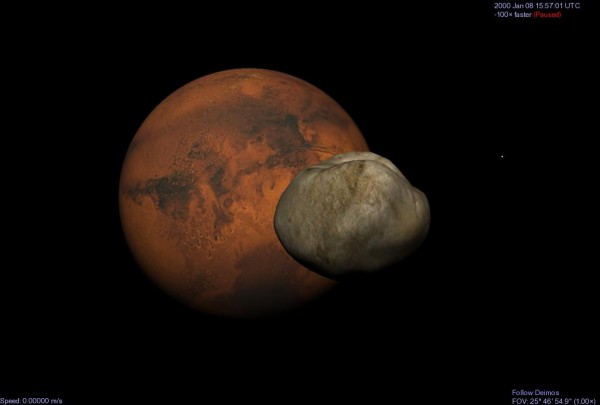 Deimos, Mars, Jupiter, and everyone else in our Solar System formed in pretty much the same way. The Solar System started off as a blob of collapsing gas. You can envision this blob as being three-dimensional, and one of these dimensions started off shorter than the rest. This direction collapses first and fastest, and creates what we call a proto-planetary disk. 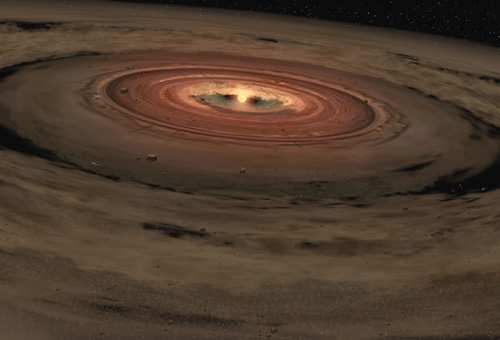 Inside of this disk, little instabilities are present. Some regions of the disk are slightly more dense than other regions. Gravity is this wonderful force where, when you have more matter, it becomes more attractive. In the early stages of formation, these slightly overdense regions grow and grow, limited only by the amount of matter around them. Something like Jupiter was pretty successful, eating up about a full 50% of the matter in the Solar System that wasn't eaten by the Sun. Something like Earth was far less successful, by a factor of about 300. 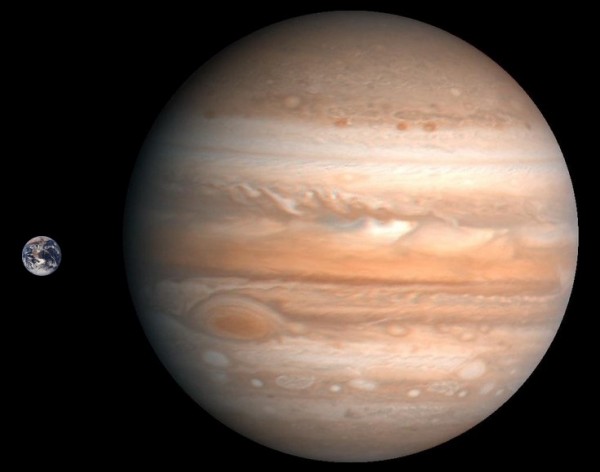 But, regardless of size, all of these bodies are made up of a mixture of many different elements, separated into different layers by the force of gravity and by buoyancy. We've studied the Earth very well, and we know that the densest elements -- iron, nickel, lead, etc. -- live at the center in their most highly compressed, stable states.

If there were no such thing as the Sun, the Earth would probably have a huge atmosphere of (mostly) hydrogen atop it as well. But there is a Sun, and a combination of the high temperatures of the Sun, the relatively low surface gravity of Earth, and the Solar Wind blew this loosely-held hydrogen exosphere off of it many billions of years ago, leaving behind the much thinner atmosphere that we have today. 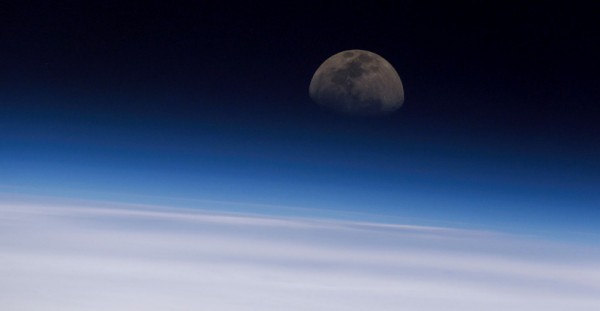 So now, we come to the gas giants, and specifically, as Brad requested, to Jupiter. While we may think of these gas giants as, you know, being made up of gas, that isn't the whole story. At the core of each of these gas giants is a hard, rocky core not all that different from our planet, except in terms of size and density. (They are under a tremendous pressure from those thousands of miles/kilometers of atmosphere atop them.)

Take a look at the cutaway (below) of the gas giants. 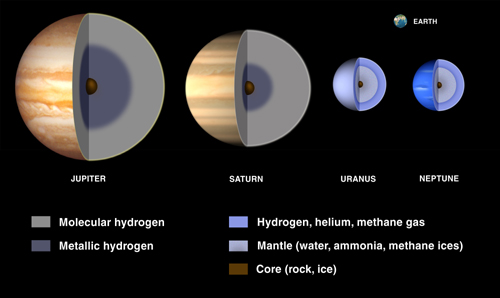 Additionally, a planet as massive as Jupiter has enough hydrogen gas that the pressure can reach absolutely tremendous values. Once you exceed about 5 million times the atmospheric pressure on Earth, hydrogen, rather than a gas, forms a crystal-like state known as metallic hydrogen. Metallic hydrogen is so dense that the space between hydrogen atoms is significantly smaller than the atomic radius of hydrogen. 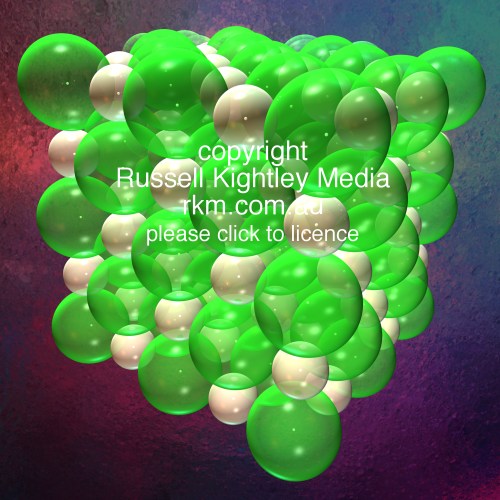 Now, even Jupiter, the closest gas giant, is more than five times as far from the Sun as Earth is. Far out from the Sun, these outer atmospheres are safe. But if you bring these planets too close in, the Sun will be able to boil them off, leaving the solid interiors behind.

In the case of the extrasolar planets we've found, like Corot-7b and the Gliese 581 system (below), these atmospheres are completely stripped away. 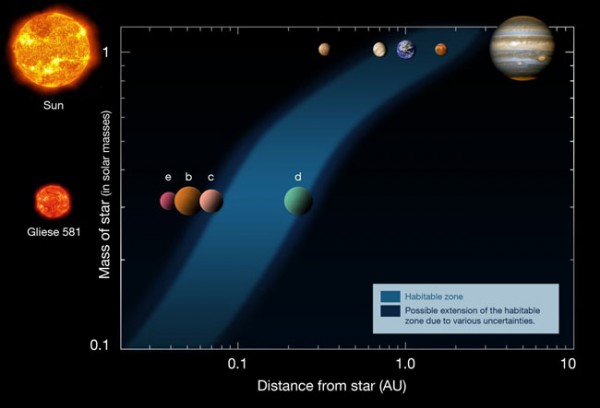 So Brad, the only thing left to ask is this: Does the metallic hydrogen layer turn back into a gas and boil off, or does it remain crystalline and bound to the planet?

Good question, and welcome to a question that hasn't been answered experimentally yet. Theory says that the type of crystal structure expected to form should, much like ice, boil/sublimate (i.e., turn to a gas) under the heat of the Sun, become a gas, and eventually disappear.

So, sorry to disappoint you, but unless the experimental data comes in and tells you that the lattice is stable enough to withstand, say, the heat of the Sun at the distance that Mercury is, that metallic layer of hydrogen should eventually boil off, too, leaving you with that incredibly dense, rocky core, and nothing else.

Still, that leaves you with an incredibly impressive core of a planet, doesn't it? Anyone want to go mining?

With regard to the n times Jupiter size exoplanets that are being found that are orbiting with periods measured in days(our days), this article implies either 1) The star is so weak that the gaseous atmosphere has not be evaporated or 2) The planet is a very very very large rocky core remanent of a much larger gas giant planet. If so are there any estimates as to the size of the original planet?

It's "Gliese 581", not "Gliese". The latter is the name of an astronomer who gave his name to the Gliese catalogue of nearby stars, one of whose members is Gliese 581.

"Metallic hydrogen is so dense that the space between hydrogen atoms is significantly smaller than a single proton."

Really? Protons are kinda smallish. According to Wikipedia (I'm definitely not a physicist :p), the spacing is "significantly smaller than the Bohr radius", but that's a rather different value.

At that temperature and pressure? Won't it be a supercritical goop?

As I recall, there's still some doubt as to whether Jupiter (as opposed to the other gas giants) has a rocky core at all - not that it doesn't have the rock forming elements, but they may be more distributed through the volume of the planet.

You wrote:
Metallic hydrogen is so dense that the space between hydrogen atoms is significantly smaller than a single proton.

No. As noted in Wikipedia, the proton-proton spacing in metallic hydrogen is smaller than the Bohr radius of the electron in a free hydrogen atom, which is about 0.5 Angstrom. It is not clear from WP how much smaller, but about twice as close seems likely. (see metastable metallic hydrogen) This is still about 1000 times larger than the proton. If the spacing were less than a proton, you would be at neutron star densities, which Jupiter is not.

Perhaps you meant to say:
Metallic hydrogen is so dense that the space between hydrogen atoms is significantly smaller than ordinary solid hydrogen.

Leads to an atomic volume of (0.14 nm)^3 which is a quick order of magnitude estimate of internuclear distance.

So metallic hydrogen is squished indeed. At least 6-7 times as dense as the normal solid. But is it as dense as HCP rigid Bohr-radius spheres? I think the HCP cell volume is 4â2 r^3 which would mean the density of HCP atomic hydrogen Bohr spheres would be almost 2.0 g/cm^3.

You guys are right!! The text should say "atomic radius" rather than "radius of a proton", and I will fix that.

The system is also Gliese 581. I should know better about both of those things.

And Brad, you're welcome! Thanks for asking such an interesting question!

I wonder about other cosmic giants, like red giant stars. It's difficult to comprehend the scale of these behemoths.Could you put this in perspective?

Could you put this in perspective?

Nice explanations. :-) In my physics lectures, we learned it in similar ways - calling grad the "vector of steepest descent", saying that div tells you the sources and sinks (although water wasn't directly mentioned there, IIRC), and rot tells you the "eddies". But the explanation for rot grad = 0 is new to me - great way of stating that! Now, what about a similar nice explanation for div rot = 0? ;-)itunes.com

Ryan, rock is heavy. How fast do you think the convection is that stops rocks from settling out to the centre?

I think you've spent too long looking at laval lamps.

Tides are very powerful forces. The link below describes what happens when a gas giant has a close encounter with a star. As you can see the gas goes everywhere but the rocky core stays stable. I said the rocky cores / liquid core / plasma core migrate and that is what it looks like standing on juipter. What is actually happening is that the cores are staying roughly fixed but the atmosphere and liquid are moving. There are huges tidal forces involved.

Show me your evidence and simulation