Happy Friday the 13th from Hubble!

"A house is never still in darkness to those who listen intently; there is a whispering in distant chambers, an unearthly hand presses the snib of the window, the latch rises. Ghosts were created when the first man awoke in the night." -J. M. Barrie

But off in space, a whopping 320 million light years away, lies the great Coma Cluster, the closest huge cluster of galaxies to us. 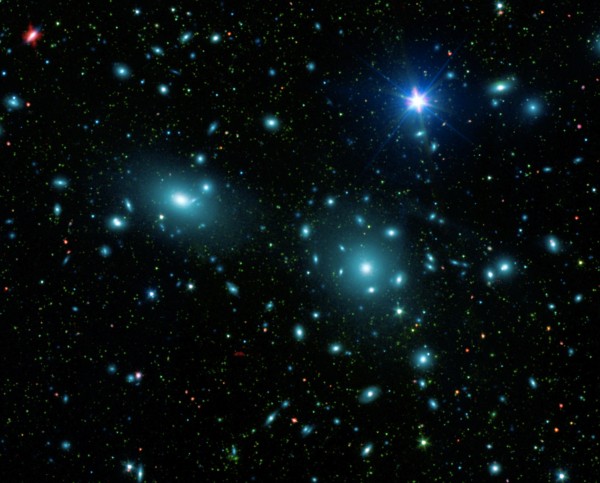 But each of these thousand galaxies, should we choose to look at it in extraordinary detail, has its own, rich, and sometimes scary story. 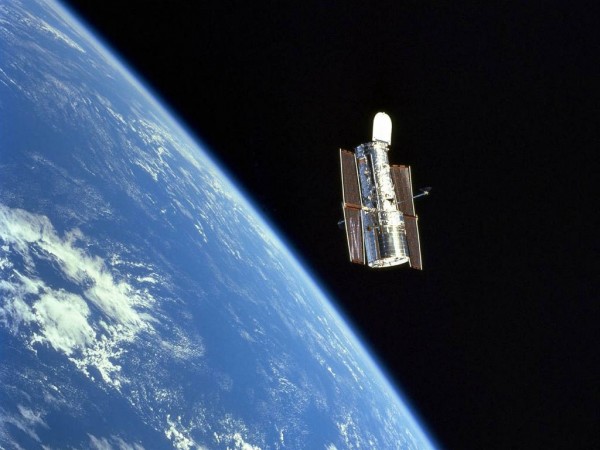 Of all the optical telescopes, only Hubble -- from its vantage point in space -- has the resolution and exposure time (28 hours!) necessary to resolve a single galaxy at high resolution at this distance.

Here it's taken a look -- at the highest resolution ever -- at NGC 4911. What do we see? For once, we get to take a look in true color, exactly as our eyes would see it. 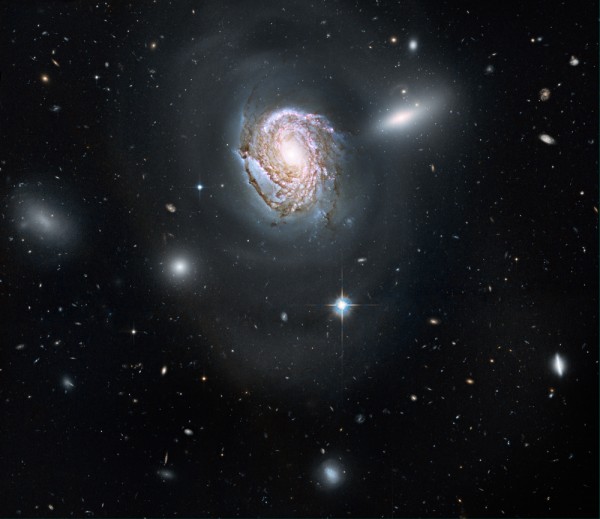 Well, we have a nice looking face-on spiral galaxy here, that's for sure. (This is the picture Hubble took.) But, like many Hubble images, this one is at a much higher resolution than it appears. Let's go in for a closer look. 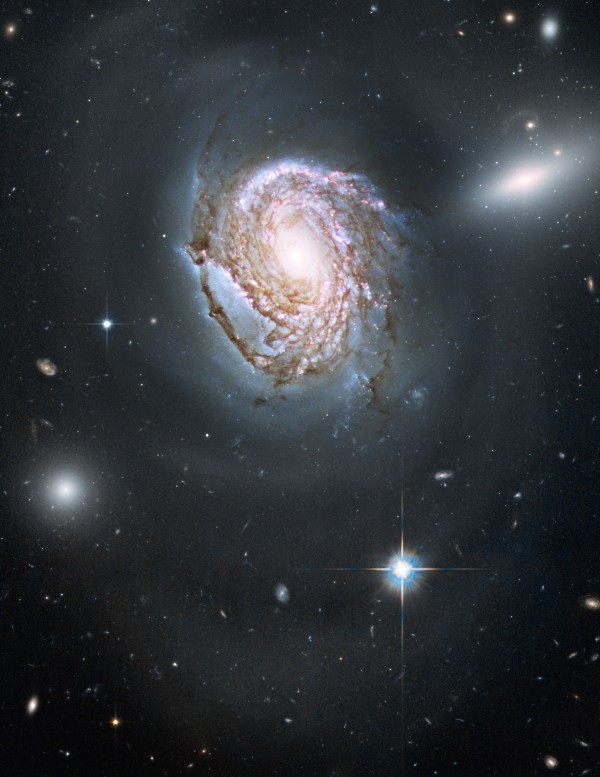 Okay, now we're getting somewhere. This galaxy has just walked away as the survivor from quite a bit of violence. See the pink spots surrounding its spiral arms? 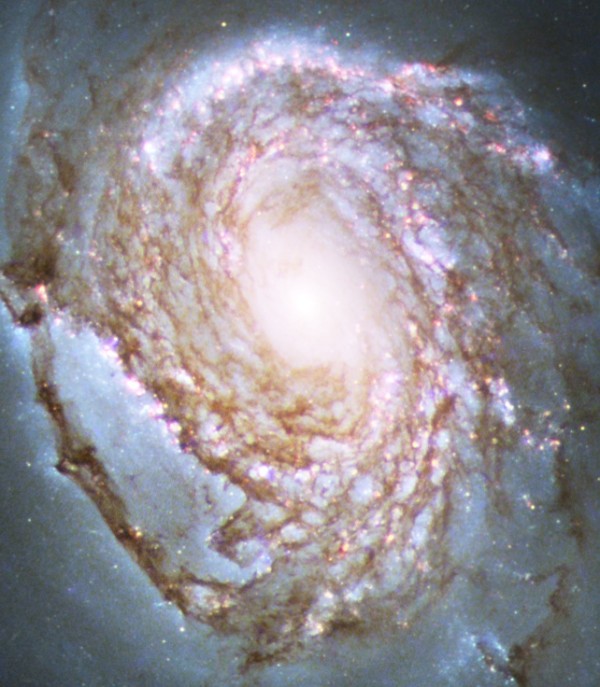 That's evidence of star formation, meaning that some major event just happened to trigger it.

Do you also see the huge, extended spiral arms that come out past the edge of the galaxy? 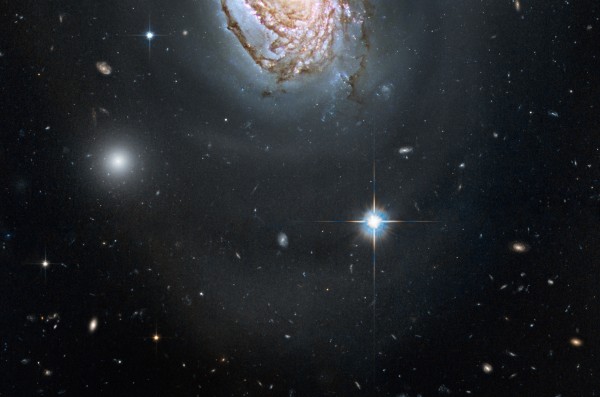 Those don't happen very often; none of the galaxies in our local group have extended spiral arms like that! So what's happened here? There are really only two possibilities. 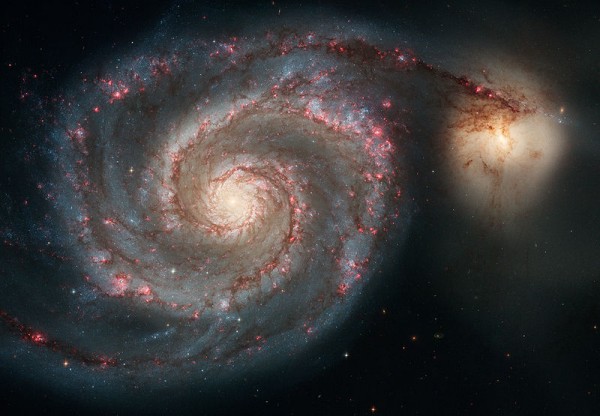 1.) Another galaxy came along, gravitationally disrupted this one, and caused the star formation and the extension of the spiral arms. Of course, in most cases where this happens, we can see the culprit, like M51 (the large spiral above) has its companion, NGC 5195.

2.) This galaxy just won a game of Hungry, Hungry Hippos with a smaller one. The extended arms could be nothing more than galactic cannibalism, although the companion must have been significantly smaller. How do we know? The spiral structure of the main galaxy isn't nearly disturbed enough.

Keep this in mind: in the Universe, nothing is safe from the pull of gravity. The cycle of creation and destruction continues, even on the scale of a galaxy. In fact, the latter option will be our galaxy's doom in a few billion years, when Andromeda comes to eat the Milky Way!

(Okay, we'll both be destroyed when that happens.)

What's wrong? Not scared? Oh well; enjoy your Friday, the eye candy, and to get the facts on NGC 4911 from the HubbleSite itself, go forth and enjoy!

Really nice piece. Amazing how information you can convey with just the right images and brief but concise text. Bravo.

Wow. This obsession of yours with the cosmos and with posting us are quite nice addictions. Hopefully you will never be cured.

Me likey. What an great high rez. image. I have a feeling alot of desktop backgrounds will be changing today.

Great post. Showed the kids and they all ran around the room screaming that we are all going to be eaten by a galaxy...Oh to be young.

Keep up the good work.

Uh uh. No way. Those are real color images? No way. Thats AMAZING!!!

"Showed the kids and they all ran around the room screaming that we are all going to be eaten by a galaxy...Oh to be young."

Oh, surely, they'll be eaten by the sun first, so there's nothing to fear. Nom nom nom.

Thanks Ethan, this is very interesting and very well presented. And this is really a remarkable object. I must admit though that I don't understand it! NGC 4911 looks quite different from both of the other cases. The features are: extremely symmetric, with regular spiral arms, plus pronounced H-alpha regions concentrated in the central portion only. If it was a case of gravitational disruption like M51, well M51 has H-alpha regions all the way out. Why would NGC 4911 be different? And if it was the result of a collision like the second case, I think we'd see a great deal of distortion and elongation. Is it possible there's a difference in age between the central portion and the outer spirals?

I think Bill is right - there's something distinctly odd in the geometry of that Coma Cluster galaxy. It's...got stuff missing! Like it got ripped away, yet it didn't smear the fine structure located nearby.

As always, you do a lovely job in presenting your material. Your blog is a joy to visit and browse through, Ethan.

NIce way to reinforce how insignificant we are in the grand scale of things. Nice post!

Does something bad happen to the stars that get flung out into space? If there was a planet like earth around one of those stars, how would it be damaged if its parent star got flung out like that?

Hubble is almost all obsolete technology now (with the exception of the latest instruments installed), but still producing amazing information from its instruments. It will be a tough act to follow. Planck and Herschel have superceded Spitzer and will produce images (well, data) that really make Spitzer look ancient - are there any planned space observatories in the UV to near IR to replace Hubble? JWST will be yet another IR observatory; is the interest in UV-NIR waning? How about another orbiting spectrometer - wouldn't it be great to get away from our horrible atmosphere? Not to mention the far IR observatories use cryogens onboard so they will not have a long lifetime like the various Hubble instruments.

I wish a second JWST were built though; if the first launch fails that would be really awful - not to mention many of the teams in industry would have dispersed so it's not as if you can just say "that's OK, we'll just build a second one". And if both birds fly succesfully then great. The Orbiting Carbon Observatory launch failed and there was serious talk of scrapping it and designing a completely new one (as if the first didn't have enough budget overrun problems).

I'm not worried about Andromeda eating up the Milky Way - our own sun will be long gone by then (if the current estimates of star lifetimes are accurate enough).

It's really amazing that you manage to find the exact right quote to start your article with, every single time! Amazing!

Never want to see Hubble retired. It has created a curiosity in the public at large for what is out there.

Just curious what is the actual resolution of the images that Hubble took?