Weekend Diversion: Jewels of the World

This world is full of beautiful things that are simply awe-inspiring. Some of them are very much man-made, such as this 2007 song by Ricky Skaggs and Bruce Hornsby,

Crown Of Jewels.
But others took thousands of years to form. 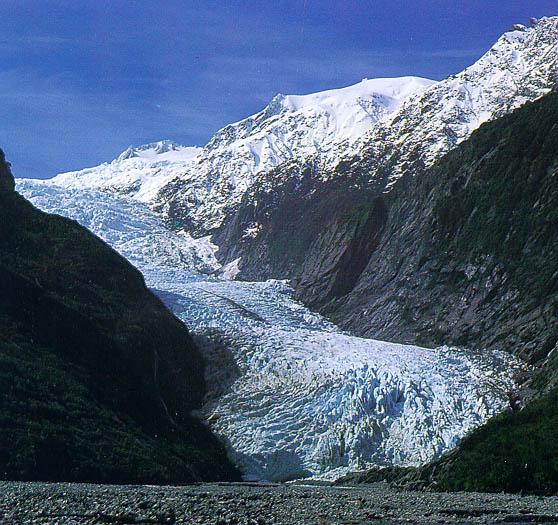 In many great places all over the world, glaciers are an incredible wonder to behold. Carving valleys, rivers and lakes over thousands of years, they are one of our planets great examples of how slow processes can make fantastic changes over long amounts of time.

But in most places on Earth, they may not be for much longer. 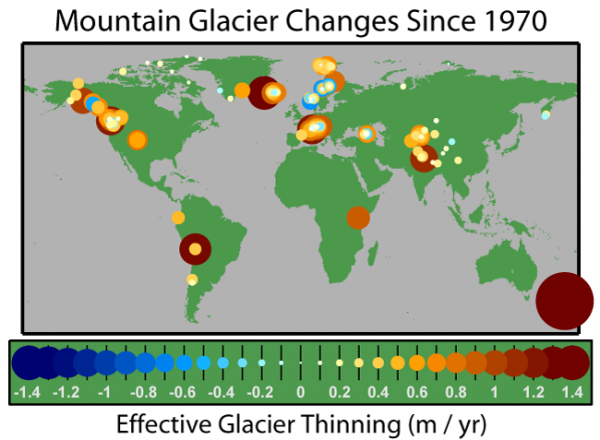 Some glaciers retreat as a specific region of the world randomly gets warmer, other glaciers thicken as it stays at lower temperatures. But over the last 150 years, correlated very strongly with increases in industrialization, we have seen a global retreat of glaciers. 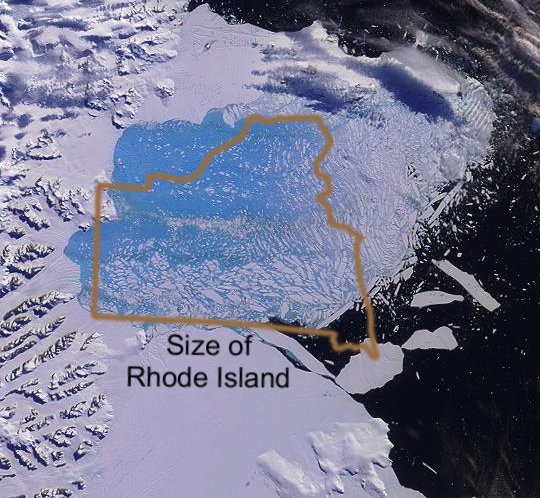 This ranges from Antarctica, above, where the Larsen B ice shelf -- the size of the U.S. state of Rhode Island -- is collapsing due to ice retreat, to the Arctic, below. 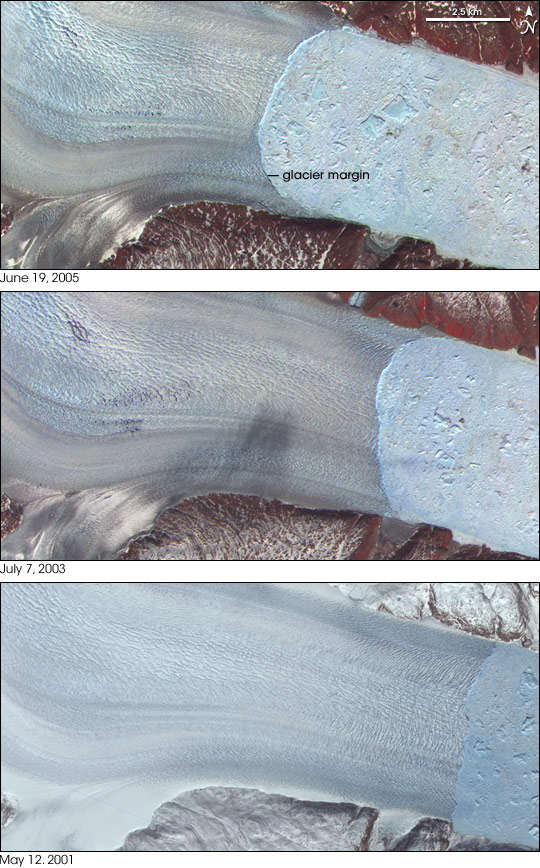 Helheim Glacier in Greenland has seen a retreat of 5 kilometers over just four years, from 2001 to 2005.

But perhaps the most spectacular glacier retreat available to view comes from a series of photos taken over a timespan of 52 years.

Alaska's Mendenhall Glacier, just 12 miles from Juneau, is shown above as it was in 1958. Now, it's important to state that measuring one glacier's retreat isn't incontrovertible proof of anything more than a local warming effect. 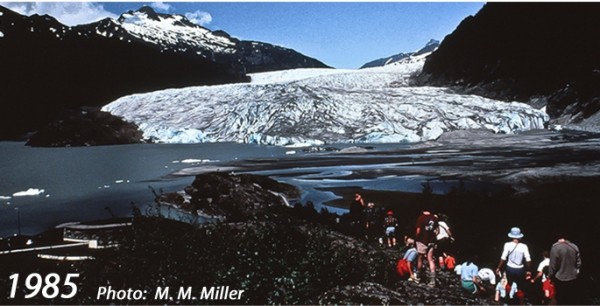 But as can be shown, what's happening to Mendenhall, as photographed above in 1985, is happening to most glaciers all over the world. Many are shrinking, others are disappearing completely. It isn't proof of global warming, but the evidence is getting harder and harder to ignore. 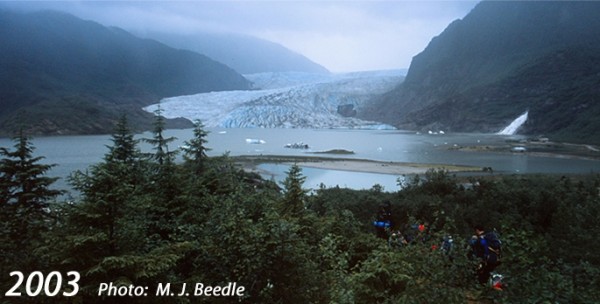 And sadly, as Matt Beedle's photo from 2003 shows, Mendenhall is shrinking at an unfortunately fast rate. In fact, I don't think it's ever made me as sad to look at as beautiful a landscape as the photo below. 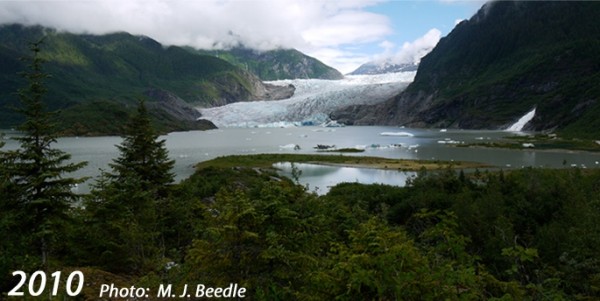 Fifty-two years. Less than one human lifetime. And that's all its taken to turn one of nature's most spectacular, imposing presences into a shrunken shell of its former self. Although it's large enough that it's not in danger of disappearing anytime soon, it's still an alarming change.

And it's happening all over the world.

So appreciate what we have while we have it, both this weekend and as long as it's around, and thanks to Matt for sharing his fabulous images with us!

My First Trip To A Glacier May Be My Last

Yet another photo from href="http://earthobservatory.nasa.gov/Newsroom/NewImages/images.php3?img_id=17644">NASA's Earth Observatory page, showing yet more evidence of what carbon dioxide hath wrought.   In the past 125 years, the Athabasca Glacier has lost half of its volume and receded more…

Here's one of those things that Carl Jung would call synchronicity, but is really just an example of how scientific research tends to converge on certain ideas. Item 1, which arrived in my email in box this morning in the form of a press release from the DC-based Institute for Governance &…

Most of the world's mountain glaciers are either totally melted or reduced significantly in size. For every one of these glaciers, there's somebody who will tell you that that particular glacier has disappeared or is disappearing for some reason that has nothing to do with anthropogenic global…

Funny, I find it saddening yet some part of me finds comfort knowing that it only strengthens the truth of what we have/are still doing to our environment. Good post and song as well.

The Columbia Icefield in Jasper National Park, Canada, like the Mendenhall is another place that, due to human habitation and regular human visitation, has plenty of photographic evidence of the retreat, including a high way that was once nearly abutted by a glacier that now is hundreds of yards away from it.

Yes, glaciers are shrinking, they have been shrinking since the end of last ice age, and will likely keep shrinking until the next one starts.

I'd love to see the day science can differentiate between soot and warming as the biggest cause of glacier retreat. I hope it's soot because I think it would be easier to mitigate but what do I know.

I saw the Mendenhall Glacier in 1993. Juneau is a great place to visit. It was raining hard that day and the water was cascading over the cliffs just outside of town and falling hundreds of feet. Also the Alaskan Brewery is located there, very tasty beer and ale.

I suspect the problem is in large part economics. When the Ozon Layer Depletion problem was recognized, it was solved fairly quickly (it is solved, right?) because the investment necessary to solve it was pretty small afterall. The problem with Global warming is that most of the world is addicted to fossil fuels and reducing CO2 emission while suckling on Big Oil is hard.

That being said, Ethan, I hope you will look kindly on my suggestion for a post on the mysteries of our Moon, as I suggested in my post on your previous blog post. :-)

I actually just did one recently: http://scienceblogs.com/startswithabang/2011/02/science_bill_oreilly.php

Your other two suggestions are noted; there's a lot in the pipeline right now, so you'll have to wait and see! But I'm stoked to have you as a new reader!

Thanks for commenting on my post. And thanks for linking to a recent blog post of yours. It was great! The post doesn't, unfortunately, seem to address the "unsolved" facts in the Wiki article I linked to. Is that because these "facts" are not actual facts, or what?

Anyway, I look forward to your coming blog posts and thank you for being "stoked". :-)

Three comments until the first denialist showed up. The internet kooks must be getting slow.

@Mark#4: I don't believe anyone has a decent model of glacial dynamics. As far as soot goes, soot on the ground = more heating, but soot in the air = cooling at the ground. As for CO2, more CO2 = more energy trapped at ground level - that would mean a combination of increasing temperatures as well as increased melting of ice. In the laboratory it's trivial to arrange an experiment so that the increase in energy results only in thawing, with no increase at all in temperature, but nature is expected to exhibit both; what we haven't got a good grip on is how much of each is expected. One prediction though is that increased thawing should lead to an earth which absorbs energy better, and hence even more energy trapped and more heating and thawing. Just to complicate things, at the poles there will be an increased heating in summer but a greater cooling in winter. So currently we have the unenviable position of being able to make qualitative predictions which can be verified over a long period of time (several decades), but we're no damned good at all with long-term quantitative predictions.

@Jens#5: You're right about the economics part. The oil and gas industry know they're extracting a limited resource and many players invest a lot of money in alternative energy production methods. However, despite being amongst the largest contributors to such research and development, funding is still severely limited because it nibbles away at profits and it is virtually impossible to convince a board of directors to approve increased funding because most people still believe that any transition from fossil fuel to alternatives must necessarily be a long-term thing and therefore any profits from the venture will be perhaps 50 years in the future. Some players in the oil and gas industry have been seeking government incentives to develop short-term CO2 mitigation strategies over the past 20 years, but absolutely all governments have simply turned up their noses and said the market will take care of things - even governments such as that of the UK which makes numerous false claims about their concern for increasing CO2 emissions.

" The problem with Global warming is that most of the world is addicted to fossil fuels and reducing CO2 emission while suckling on Big Oil is hard."

...and since by "Big Oil" you mean Big Government, the problem is political, too. The solution, of course, is fission & solar (the French use fission for peaking, but baby steps, eh?) with serious investment for the fuel problem (i.e.: portable energy) and desal plants for those of us in over-populated water-starved states. But, we didn't get that, instead it's "shovel-ready" Trains to Nowhere. 'fraid we'll have to wait for a market solution, which means a long, bumpy road.