"This is Tokyo. Once a city of six million people. What has happened here was caused by a force which up until a few days ago was entirely beyond the scope of Man's imagination." -Steve Martin

What was once only in the realm of our wildest science-fiction fantasies has become a nightmare come true for the people of Japan. Reports are everywhere that a fearsome, 200-foot tall monster emerged from the damaged Fukushima Reactor early this morning. 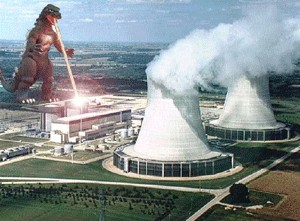 Referred to by eyewitnesses as some kind of whale-gorilla, the creature now has one Universally recognized name,

Godzilla.
After emerging from the water outside the plant, eyewitness accounts contend that the monster is capable of breathing some type of radioactive destructive power. Rare before-and-after photos have been obtained, where you can witness the damage done to the reactor. 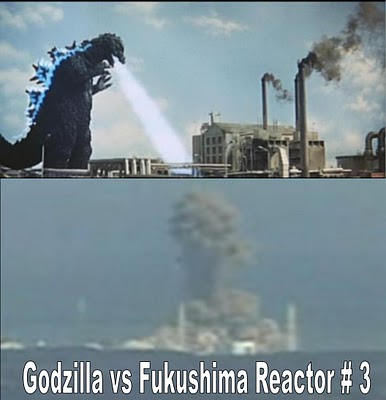 The Japanese military has tried without success to contain the behemoth. After initially coaxing it into the ocean, 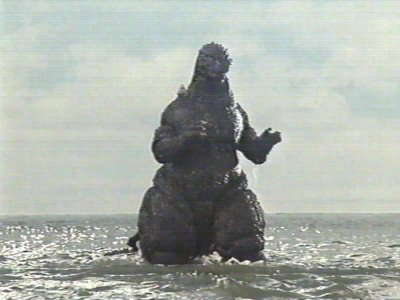 this Godzilla creature made its way inland once again, and is now on course to take it directly towards Tokyo. 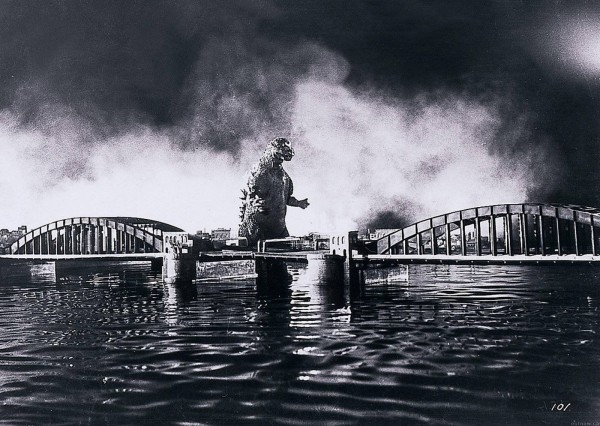 Most recently, the creature has been spotted in the northern hills, just to the West of the Edogawa River. 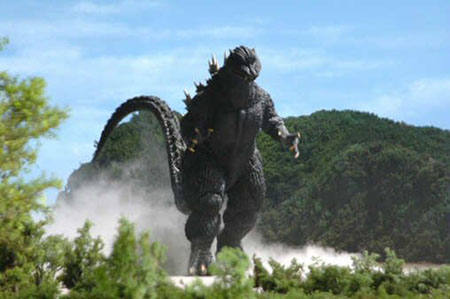 Will anyone anywhere be safe? Will even a single soul be spared from destruction? Responses have been mixed.

When asked for comment, a school-child named Kohei has gone on the record as saying, "If I say 'no,' can I have some of your mochi? Please?"

On the other hand, his mother Yuki thinks that Godzilla would make an excellent addition to the family. "Hard work, safety and hygiene are important. By always cooking food before eating it and bathing regularly, I think this will set a good example for Kohei," she explained. 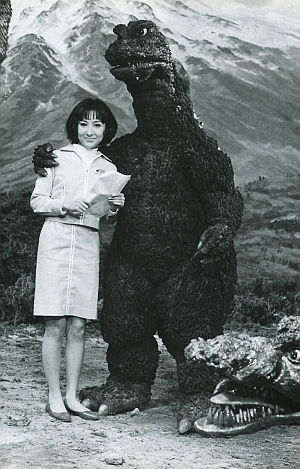 President Obama was unavailable for comment, but the state department did release these artistic renditions of what could happen if Godzilla continues unchecked. 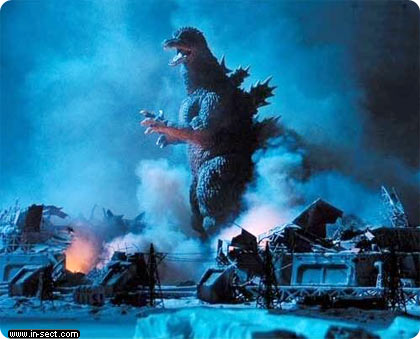 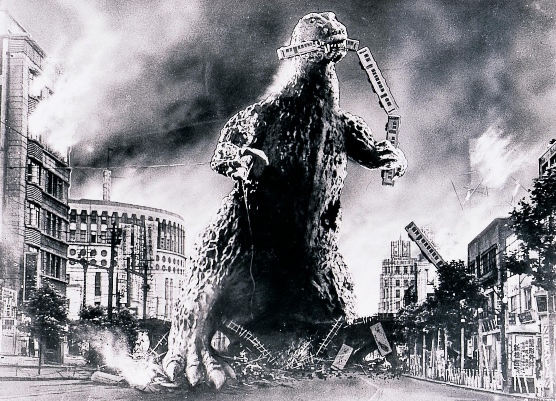 U.S. Army General Bryan D. Brown has come out of retirement to lead the U.S.' Special Operations Command, and issued the following statement:

We would like to remind everyone that Godzilla has already expressed her thirst for mangled steel and the sweet, sweet taste of blood. She appears to have little to no interest in marriage proposals at this time. We are doing everything we can to subdue the creature.

When asked about what tactics the United States military might take towards that end, he responded,

Well, the enemy's weaknesses are unknown, but we do have a secret weapon that we have been developing over the past 40 years. We believe it to be our only hope. 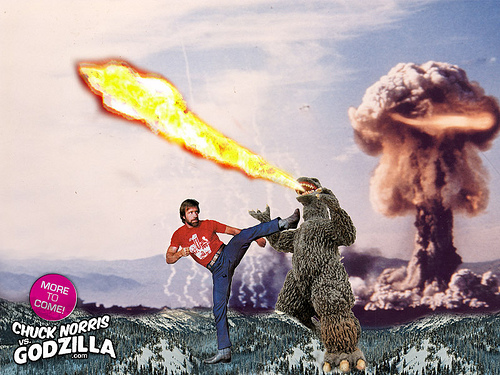 Regardless of who is right, one thing we can all be sure of is that Godzilla is a monster, as zoological studies have shown. 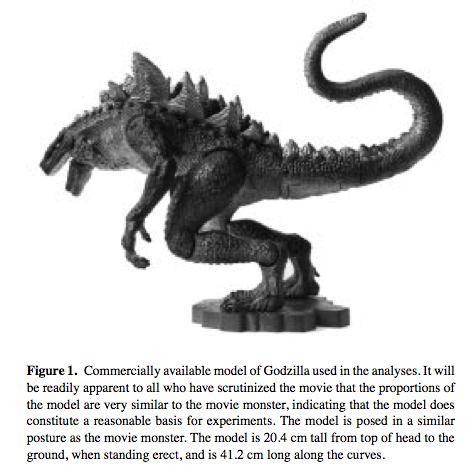 A Monster To Remember After the Writers' Strike

Once the writers' strike is over, anyone in the mood to make a new monster movie might consider this beast, described today in the journal Biology Letters. It's Jaekelopterus rhenaniae, a "sea scorpion" that lived 390 million years ago. Based on a fossil of its enormous claws was found in Germany,…

Japan Nuclear Disaster Update 23: Exposures exposed, the hole in Reactor #1, and the sea around us ...

There is a lot happening in Japan, and the situation at Fukushima remains pretty much out of human control. There is a nuclear incident at a reactor site other than Fukushima. There is still quite a bit of radioactive material leaking into the sea. The radiation levels in the crippled Fukushima…

Weekend Diversion: How 'Before-and-After' Fools You

"There was a time when a fool and his money were soon parted, but now it happens to everybody." -Adlai E. Stevenson One of the worst feelings that I've ever experienced is when I feel as though someone has played me for a fool, and fleeced me out of my time, my money, and my trust. The Dang-Its…

The reactors at Fukushima continue to be hotter than "cold shutdown" levels, and at least one reactor (#1) is probably leaking from the core containment vessel. Fission products in high amounts, high pressure, and high temperature indicate that something close to fission is still happening…

No one likes a party pooper, I know, but if there was ever a party in need of pooping . . ..

Humour is how a great many cope with disaster and destruction. That's why there are so many comedians in the U.S. They're desperately needed.

I'm sure there are those who would say that it's too soon for it, but it's kinda like therapy...

YouTube, the cause of and solution to all life's problems.

This article is somewhat culturally insensitive - although not surprising given what I'm just about to say is fairly subtle.

Things like Godzilla (and other early post-war Japanese film and anime) are reckoned by a lot of people who know about these things to be cultural responses to the fire bombing of cities during the war, the nuclear bombs and the overall loss of the war.

They share a universal theme where the Japanese community is terrorized by an incomprehensible danger but are able to overcome it by application of their cultural values, including working together, applying knowledge etc.

So by using Godzilla as a "joke" you're really just insulting them - they understand these stories in a different way.

@JM I'm not sure if you recall WWII or are familiar at all with the Pacific Campaign. The Japanese soldiers were monstrous. The loss of American life in the Pacific was disastrous. If we had invaded Japan the death toll would have been astronomical on our side. The Japanese refused to surrender. It was /their/ cultural difference that compelled them to fight to the death and not surrender. They effectively forced our hand into dropping the bombs we did. Godzilla was their own creation both the literal and figurative Godzilla. If they don't like the image they have only themselves to blame.

It's too soon for jokes but not because of what Godzilla represents. That's actually a very apt metaphor since this nuclear disaster is again a product of their own arrogance this time in defying nature and the the very real possibility of a major quake coupled wit a tidal wave. They built the reactors without the best emergency preparedness.

To suggest the image of Godzilla is culturally insensitive to the Japanese is just revisionist and ignorant.

FYI, the "Godzilla Stomp" image is almost certainly the work of Jared Hindman, at http://www.headinjurytheater.com/

Yeah, I have friends & family in Tokyo, have been trying to convince myself for the past few weeks that they are not in any danger, and upon seeing this headline my heart leaped into my throat until I opened it up and discovered it was a joke...

@TS- Right, because generalizing the motivations & actions of an entire country of people, across different generations no less, is not ignorant at all. I know that high school history classes like to teach that the refusal to surrender was somehow cultural, but it was not, at least not on the part of civilians. In order to better control the population, the government essentially created this set of "cultural" values and idealized national history, and aggressively repressed opposition to the military & the war. Add to that the widespread belief, encouraged by the government, that an American invasion would mean widespread killing of civilians. Not to mention, even the older generation in Japan now were only children during WWII. They experienced the bombings, and the immediate postwar years of privation, with absolutely no control over what was happening around them.

Saying using Godzilla in this fashion is 'culturally insensitive' shows that you don't know anything about Godzilla or how the Japanese view him.

The original Godzilla in '54 was meant as a very serious look at the feelings of the war. Later on he was used as a metaphor for lots of things (even in 2001 in Godzilla, Mothra King Ghidorah: All Monsters Attack to represent, and apologize for Japan's war crimes in the Second World War) but primarily he was, and has been, just a fun joke, a silly escape fiction movie to have fun with and make money.

If Ethan's post is 'culturally insenstive' then pretty much all of Godzill'a's movies are as well (I'm gonna cite Godzilla vs The Sea Monster through Destroy All Monsters as examples here, I mean for heck's sake in G vs Hedorah he FLIES).

As a man who lived in Japan, had family and friends effected by the earthquake and tsunami and a longtime Godzilla fan I think this was hilarious.

Do you know Mechagodzilla ?http://en.wikipedia.org/wiki/Mechagodzilla
This is the story of Godzilla vs Mechagodzilla.
Actually, the earthquake was a well-known tolerable enemy for Japan.
The man-made nuclear disaster is a Mechagodzilla. We need the pleasant fiction of that film to bring Godzilla as a hero out the ocean. Just Godzilla is able to help out solving this dilemma.

@Melissa don't be glib. Of course the civilians have little to do with the broad picture of government policy. The rest of what you wrote has nothing to do with anything.

Wow, no one has a sense of humor nowadays...
Come on people

Godzilla has been used by the Japanese to comment on nuclear technology *and* on pollution *and* on how man is less powerful than nature.
Insensitive? Yeah, but since many people do cope better with tragedy through humor, probably the best place for such humor is something like a blog, where those who find it offensive can look away. And certainly not inappropriate-- Godzilla as a metaphor for a swamped nuclear fission plant gone leaky is *apt*.
And the best way to show compassion in this situation is send aid!