"Where there is an observatory and a telescope, we expect that any eyes will see new worlds at once." -Henry David Thoreau

This past weekend, the Astronomy Picture of the Day was a remarkable shot of the giant spiral galaxy NGC 6872, taken by the Gemini Telescope. (It's not Hubble, but Gemini is pretty impressive in its own right!) 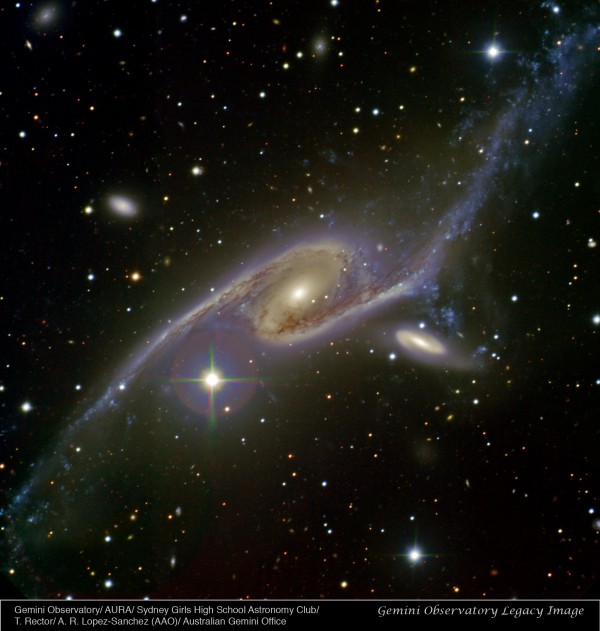 One look at this galaxy should tell you that it's an interacting galaxy in the process of a collision! How should you be able to tell?

The distorted shape is a big clue; normal galaxies don't have extra-long tails stretched out in a line through space! That's something normally caused by strong gravitational interactions from a galaxy interacting with another one.

There's also, if we look closely, the big clue of the disrupted tail of stars on one side! 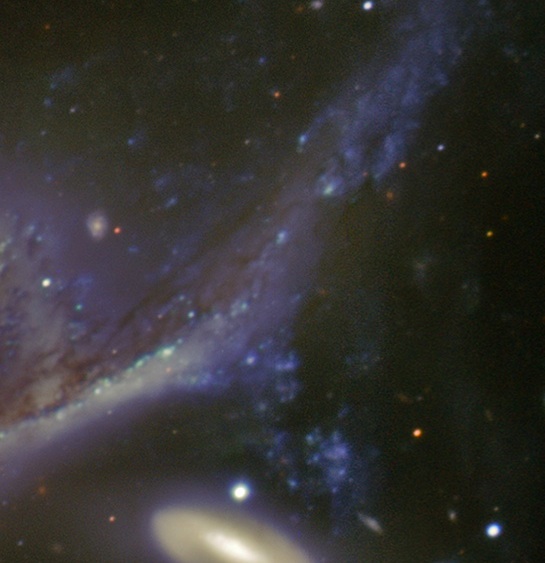 It looks like, in the wake of that smaller galaxy, there's a stream of stars that's sort of been "dragged" out of the larger galaxy's tail, further evidence of a collision and (likely) a future merger!

But how big is this galaxy we're talking about? Believe it or not, that galaxy in the picture is the size of the Milky Way. Not that big galaxy, though. This one. 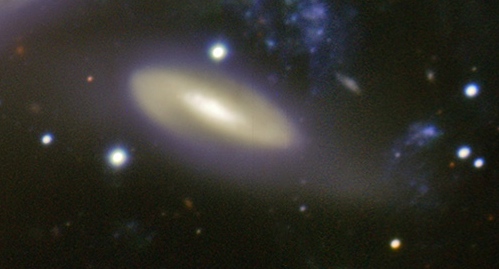 Say hello to IC 4970, the small galaxy in this interacting pair. The large one, NGC 6872, is about four times the diameter of the Milky Way. For scale, that's about the same size comparison as the Earth to the Earth's Moon. 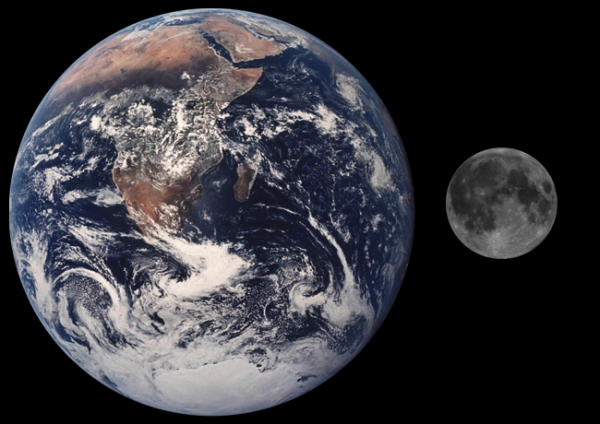 So if these are two colliding galaxies, there should be more than just the visible light that's interesting. So I went to do a search to see what else was out there on these interacting galaxies, and wouldn't you know it? The Chandra X-ray telescope has taken a look at these guys! What does it see? 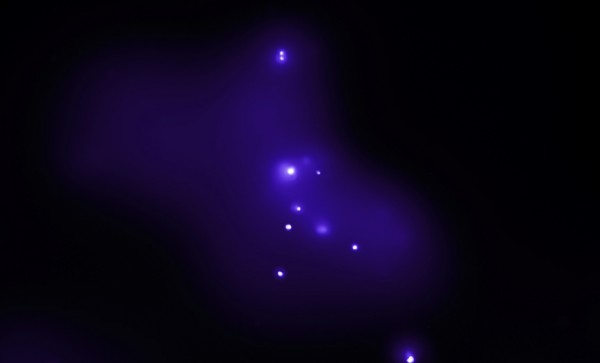 Interesting! There are some strong point sources of X-rays here, which are usually caused by cool gas getting fed to a massive black hole, which accelerates the matter, spits it out at an incredible speed, and causes the emission of X-ray light. Pay particular attention to the double source at the top, as pointed out to me by my student, Rye. If we rotate and zoom in on our new optical image to line it up with the X-ray image, what do we find? 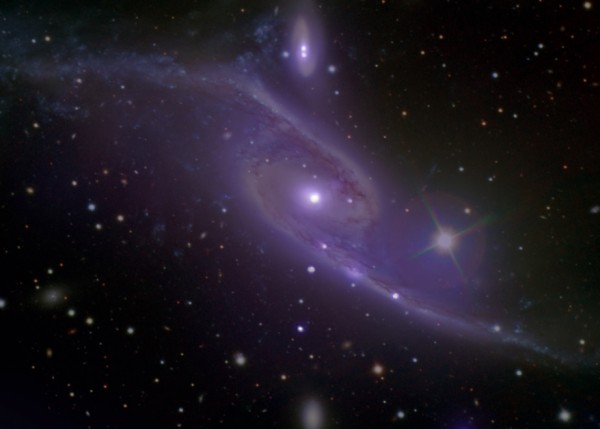 That normal-sized galaxy, IC 4970, looks like it has two strong X-ray sources coming from it.

I got curious, so I started looking for any scientific papers on the topic. I came across this one by Machacek et al. (pdf here), that shows that the nucleus of this galaxy doesn't have enough gas on its own to produce this X-ray emission, but is being fueled by the larger galaxy's gas!

That's kind of amazing in and of itself. But what do they have to say about the fact that there are two X-ray sources? 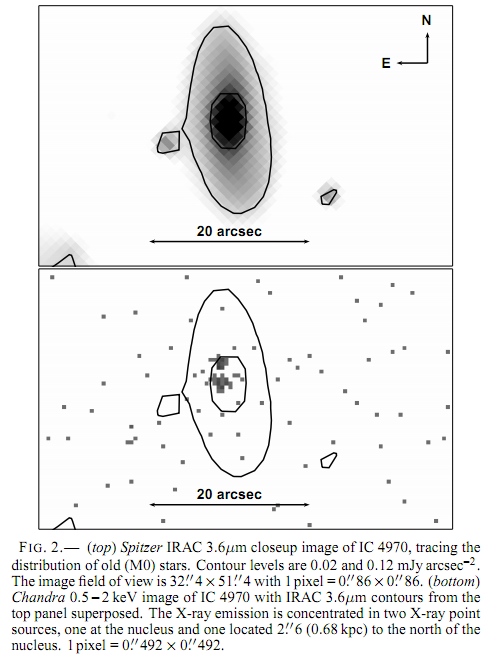 Well, they definitely see two of them, and while they focus on the brighter, variable one at the nucleus, the other one is about 40% as bright and located a pretty hefty 2,000 light years away.

Until now, we've only seen binary black holes in galaxies like this one: 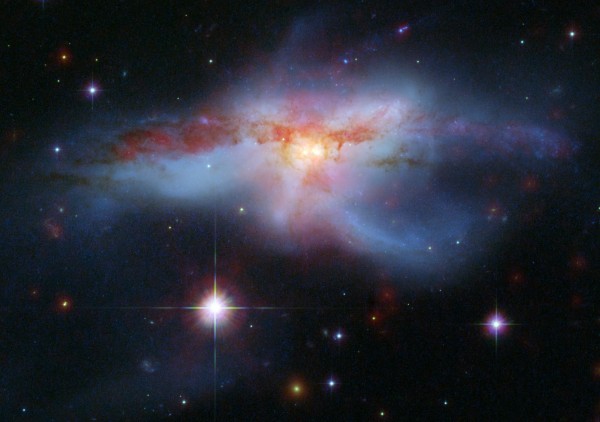 NGC 6240, which is a galaxy in the midst of a major merger! Yes, but those are two galaxies, each with their own black hole, that are currently emitting significant amount of X-rays due to the violence of the collision. 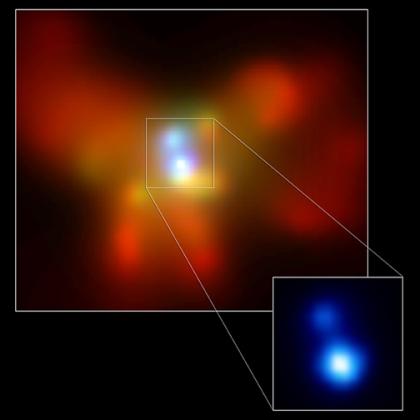 Could binary supermassive black holes in normal, relatively quiet galaxies simply be another normal occurrence? And could this X-ray shot of IC 4970 be evidence of a major (or semi-major) merger in the distant past? (The responsible answer is "we don't know," but if I were a betting man, I'd say it sure seems likely to me.) The above Chandra image -- of NGC 6280 -- is only 10 years old, and was the first ever observation of two supermassive black holes in the same galaxy, regardless of circumstance!

If that's the case, it would mean that every time we either gobble up another galaxy or merge together with another large one, the black holes could merge together to form a much more larger one, or they could simply find a nice, mostly stable orbit in near the center of the galaxy, and hang out there for an indefinitely long amount of time! We just keep realizing that the Universe is more and more amazing that we'd ever imagined, don't we?

Very nice. And of course binary supermassive black holes might be normal.

Now this post got me to thinking; so I did a few searches and look what I found.
This guy, Bernd BrÃ¼gmann, does computer simulations using general relativity on the merger of 2 black holes. Wow. I mean really wow!

And he says such interesting things as, "The final phase of a binary system of two black holes with a total mass of about 30 solar masses constitutes one of the most likely sources for the gravitational wave detectors GEO and LIGO based on the frequency dependent sensitivity of these interferometric detectors."

Now this 30 solar masses sounds like an awfully small total for two black holes. But I'll suspend my skepticism and assume that BrÃ¼gmann is correct: that two merging black holes of this size could really be detected. Nice. Now if this idea pans out; then not only might we find gravitational waves via GEO, LIGO or LISA; but we also might have a better way of finding small binary black holes than we do of finding solitary black holes.

OK, no skepticism from me today.

Oops, I forgot the link for "This guy, Bernd BrÃ¼gmann, does computer simulations using general relativity on the merger of 2 black holes. Wow. I mean really wow!" http://www.tpi.uni-jena.de/gravity/People/bruegmann/

How do merging galaxies bleed off the excess kinetic energy? Two such massive objects with different movement and momentum vectors must have a fantastic amount of dissipation to do if they want to merge into a single object.

@OKThen: Brügmann is talking about black holes of stellar origin, not the black holes at the centers of galaxies. A combined 30 solar masses is plausible for such a pair (a little high, perhaps, but not unreasonably so), and as a typical galaxy will have many stellar mass black holes it seems likely that some of those will end up in binary systems.

Mu@6 A few years back I played around with colliding/merging star clusters. Not galacies, which have more structure, and gas, and dark matter. But the tidal dissipation is really amazingly strong for gravitaionally interacting distributed objects! A fair chunk of the angular mementum, and kinetic energy is lost via high velocity starts that get thrown out.

As an avid StumbleUponer, I have grown a great distaste for blogs. But, your science blog is consistently enjoyable, well written, and informative. Thank you

Eric Lund
Thanks.
What excited me.
First, Ethan's post. I was unaware that binary supermassive black holes had ever been observed. Ethan's interpretation/hypothesis makes sense.

Second, finding that BrÃ¼gmann was doing theoretical work to help find stellar binary black holes. As far as I know, stellar black holes have never been observed. So a strategy to find binary ones seems particularly impressive.

Third, I tend to be skeptical about GEO, LIGO or LISA and gravitational waves in general. Because the possibility of detection seems to keep moving out of range of experimental capabilities and seems to be limited to ever more extreme events at the ends of the universe (I exaggerate). But BrÃ¼gmann's work is looking for a quite ordinary theoretical events that should be quite common in any galaxy (I oversimplify).

Eric Lund
Something about what you said led me to suspect that maybe stellar black holes have been observed (not counting supernova observations).

As for Ethan's blog. It teaches me stuff both when I am skeptical and when I am not. And it triggers further ideas to explore and learn. So, thank you Ethan.

So GD cool that I'm kicking myself for not going into astronomy.

Great image Ethan (and I do classifying on Galaxy Zoo, so I have seen a lot of Hubble images). What is going on purely in physical terms in the collision, do you know/ Is the main galaxy "unwinding" as it were in the face of the collision? If not has there been a second collision/approach which is affecting the lower arm? How is the shape of the arms essentially maintained (except for the few bleeding away in the upper arm, as you point out) under either scenario?

Wouldn't dynamical friction from all those nearby stars drive even a pair of supermassive black holes to coalesce in a remarkably short time?