Weekend Diversion: Bunnies do what, now?

For those of you who are fans of Punk Rock, Post-Punk, or New Wave music, you definitely need to check out the French group, Nouvelle Vague. Performing only covers of well-known songs in those genres, they present them in a light, poppy way that's reminiscent of such bizarre albums as Lounge Against the Machine. Only, it's much more "art" than it is novelty, at least to my ears. For this weekend's diversion, I present to you their cover of Echo & the Bunnymen's hit song,

The Killing Moon.
So what's the deal with bunnies? I've never held anything but contempt for the lousy British newspaper, The Daily Mail, until I saw this article. 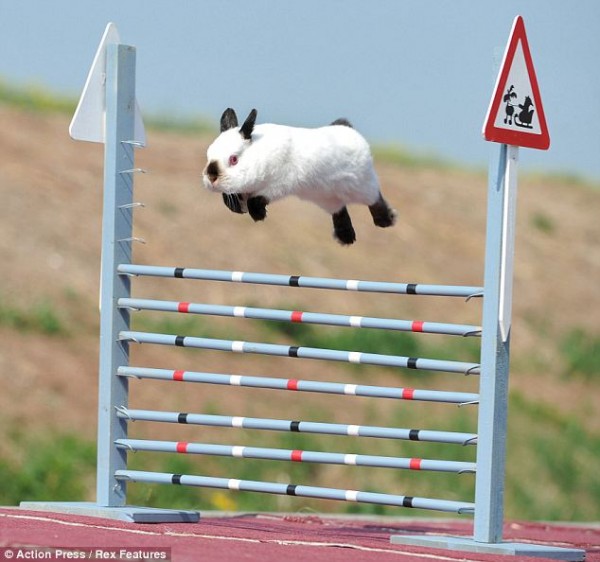 And this is real: there are agility rabbits! Invented in Sweden about 30 years ago, and called Kaninhop, they've actually trained rabbits to do showjumping. 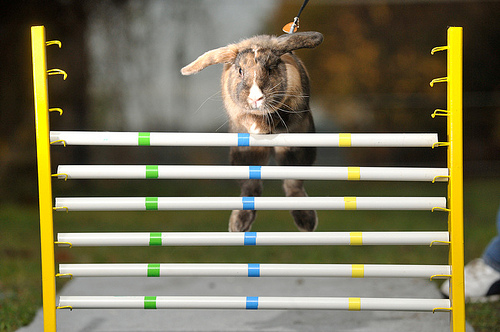 You might look at the above photo and say to yourself, "Wait, is that a leash on that rabbit?"

Oh yes, yes it is. And there's a good reason for it! 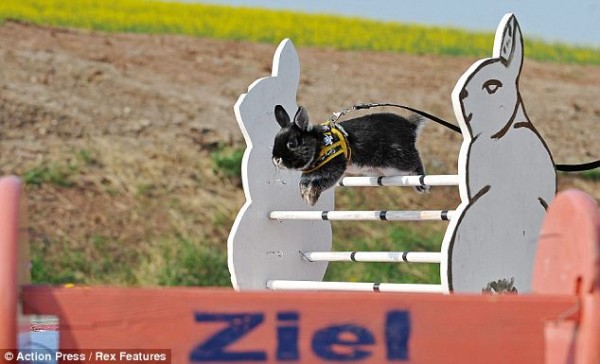 We use them in tournaments for safety. Just think of what would happen if a male were to break free. We want to avoid uncontrolled reproduction. It has happened before. 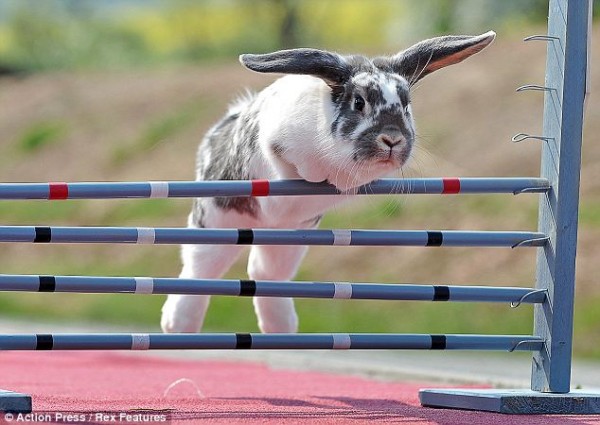 In addition to the showjumping, there's also a rabbit high-jump competition! 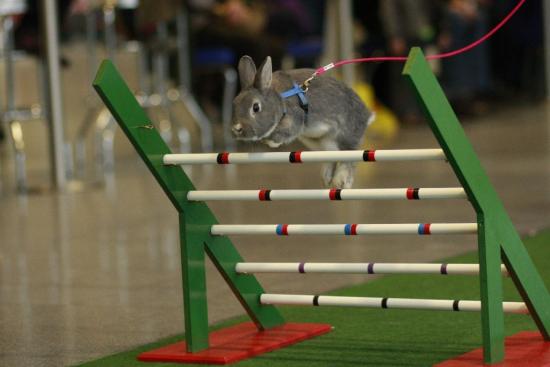 Who knew that this event was out there? And yet, it's kind of amazing that one can train rabbits to do this.

For those of you who need to see a video (warning: contains You're the Best as an audio track), I've got you covered.

And hope you have a great weekend!
Tags
Random Stuff

Rabbits make good house pets too because they respond well to litter box training. Training rabbits to engage in jumping competitions isn't quite the feat though that training a dog to dance the Merengue is. http://www.youtube.com/watch?v=Nc9xq-TVyHI

How does leashing a man to a rabbit prevent uncontrolled... Oh, she means the rabbits...

Jumping rabbits... yeah! But that music is even more awesome. I just ordered the three album set from Amazon.

Vagueofgodalming - "How does leashing a man to a rabbit prevent uncontrolled... Oh, she means the rabbits..."

It's much more difficult to make a complete stranger commit to a situation that could result in pregnancy when you've got a rabbit on a leash.

"it's kind of amazing that one can train rabbits to do this."

Really, why exactly is it amazing that one can train rabbits to jump?

Please do not answer this question. Astrophysicists are easily amazed.

But can you teach them not to gnaw on the cables behind the television?

"uncontrolled reproduction" of male rabbits.
If you know anything about keeping rabbits as pets, there's a sad truth behind those words.
Rabbits are very social animals. They need a group. Unfortunately, in captivity, that means either lots and lots of baby rabbits if you keep a male and a female, or lots of spilled blood if you try for same-sex rabbits.
So, an uncastrated male rabbit who doesn't get to make a bazillion more rabits has to be kept alone. That's like the bad old habbit of keeping one parrot because it will be much more attached to its owner.

They seem to use their ears as airfoils to gain additional lift. Clever.

Bunny's are awesome they act like a dog and very well trained! The music is very punk rock. I love it.

Rabbits are intelligent! You can teach them to jump on! They are fun. Music is killing me softly! It really rocked! I really like a punk rock! emo punk music really great too.

bunnies are very clever animals and very cute, i used to have one..

Very interesting details you have remarked, thanks for putting up. "Ignorance, the root and the stem of every evil." by Plato.